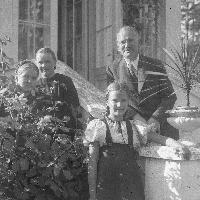 Krišs Rake (1897-1965) was a professional photographer who was popular in Riga in 1920s and 1930s due to the high quality of his photographs. During his lifetime, Rake's clients included many thousands of people, members of professional and civil organizations, etc. His clients also included people and organizations of independent Latvia who were considered suspect by the Soviet authorities. After Rake's death, from 1976 to 1981, his son Ilmārs Rake presented his collection of more than 3,000 glass photographic negatives to the Museum of the History of Riga and Navigation. In the summer of 1990, photographs from the collection were widely used in the exhibition ‘Student Organizations in Latvia’, in which for the first time since 1940 a broad picture was presented of student fraternities and other organizations that were banned and closed down by the Soviet authorities. Although they were widely used in recent representations of the past (such as the Latvian National Library project ‘Zudusī Latvija’ [In Search of lost Latvia], http://www.zudusilatvija.lv/), and his work has been put on the Joint Catalogue of the National Holdings of Museums of Latvia (https://www.nmkk.lv/), Rake’s contribution to Latvian photography and his holdings in museums have so far not been paid much attention in academic publications.

The collection was donated to the Archives of the National Commission of "Solidarity" in 1997 upon the death of the collector - Aleksandra Dąbrowska-Petersen, in accordance with her wish. The authors of the clippings remain uknown and impossible to track individually. Some of the press articles were simple news agencys' reports, other consisted of more deepened political analysis.

The collection of press clippings in Polish, English, Danish, and German. The materials are related to, i.a. strikes in the August of 1980 and the registration of the "Solidarity" Trade Union, the events in Bydgoszcz in 1981, the first National Assembly of the "Solidarity" Trade Union Delegates in Gdańsk, and the visit of Lech Wałęsa to France in 1981. They document the reactions of foreign press to the introduction of martial law in Poland, Wałęsa’s peace Nobel Prize (1983), the assassination of father Jerzy Popiełuszko (e.g. the snippets mention the protests of Polish emigrants in Denmark after the killing), as well as the Polish Round Table Agreement, and the parliamentary and presidential elections (1989-1990).

It is an interesting collection illustrating the coverage of the phenomenon of "Solidarity" in Western media, and may be useful for political comparative studies on the reception of this social movement.

In the catalogue entitled “The Book of Records (of the Youth Resort),” dozens of unusual records achieved by the young people who came to the prime youth resort of communist Romania were gathered each year. The catalogue in which these records were listed is in A4 format, with two thick red cardboard covers. Unfortunately, fewer than fifteen pages survive from the original edition. They are conserved in the Andrei Partoş–Radio Vacanţa-Costineşti Private Collection. As Andrei Partoş says, “I decided to take this notebook home after 1989. It was in the radio studio, and year by year pages kept disappearing from it, for various domestic purposes. It’s a precious memento. It was made by me. And what’s left of it is now in my possession.”

The competitions that the young people took part in, and the inevitable records that resulted from them, could be highly unconventional: “the longest headstand,” “the longest endurance of hunger,” “the most somersaults,” “the most original earring,” “the longest arm hair,” “the fastest drinking beer,” “the longest moustache,” “the biggest shoe size,” “the most cracked tongue,” “the most powerful sneeze.” Probably the most unusual was the competition for sitting on a post over a period of forty-eight hours, which is said to have been won one year by one of Romania’s post-1989 prime ministers. “But there were many others – equally, if not more way-out,” says Andrei Partoş. The “Book of Records” was regularly read on Radio Vacanţa-Costineşti and constituted a source of fun. 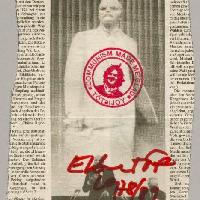 Tót started his TÓTalJOY series in 1971 as a reflection on the dictatorial conditions at the time in his homeland, but he created many new versions after having moved to Germany, and he placed the statements in very different contexts. He uses a wide variety of media (action, audio, envelope, fax, letter, lipstick, newspaper, object, photocopy, postcard, poster, spray, stencil, rubber stamp, telegram, T-shirt, video etc.) to bring them into play. In these works, he sometimes addresses trivial things, while at other times he touches on emotionally neutral or even negative aspects of life.
read more 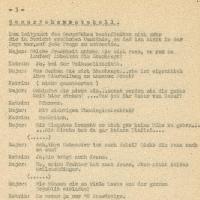 Compilation of memorial testimonies
Searches, arrests and police abuse were commonplace in the daily life of non-conformists living in the GDR. Following the mass incarcerations of youths and young people across the country in 1981, particularly from among the ranks of the open youth outreach work of the Evangelical Church, Pastor Walter Schilling encouraged those targeted to keep written records of their ordeals and preserve the memory of what transpired to them. He wanted to document, collect and distribute records of the targeted measures undertaken by the state among the public and make the crimes known. Walter Schilling (1930-2013) was one of the creators of open youth outreach. The “Matthias Domaschk” Thuringian Archive for Contemporary History preserves his estate comprising 18 running meters of materials spanning 50 years. Further memoirs pertaining to the documentation of police abuse can be found in the Ulrich Bär and Wolfgang Thalmann collections.
read more
31 - 35
«« previous page 1 ... 2 3 4 5 6 7 8 9 10 11 12 next page »»