In 1968, Zaborskaitė finished and published her book about the life and work of the Lithuanian poet Maironis. She presented it for her doctorate. During her speech, she acknowledged that the idea to write a book had come to her in the 1950s, and the book was written in 1958-1961 (see Stonytė V., Ir aš ją pažinojau...Atsiminimai apie Vandą Zaborskaitę [I Used to Know Her. Memories of Vanda Zaborskaitė], 2016, Vilnius: Lietuvos rašytojų sąjungos leidykla, p. 503). Nevertheless, due to the political situation and the regime's attitudes towards the Department of Lithuanian Language and Literature at Vilnius University, Zaborskaitė not only could not publish her book on Maironis, but was also dismissed from her position as lecturer (in 1961).

The poem “Poslední růže” (“The Last Rose”) from the collection Dům Strach (House of Fear) was written by Jan Zahradníček during his time in Pankrác Prison in the early 1950s. The manuscript of this poem was hidden by Václav Sisel , a guard and technical chief in the Pankrác Prison print shop. This manuscript finally became part of the Jan Zahradníček Collection at the Museum of Czech Literature in 1968. The poem depicts a real event: Václav Sisel, in accordance with Jan Zahradníčekʼs request, gave a rose from the prison garden to Antonín Ludvík Stříž, the canon of the Royal Collegiate Chapter of St. Peter and Paul at Vyšehrad. The rose, which grew and bloomed before prisonersʼ eyes, was then put on the main altar of the Vyšehrad cathedral.

“The Book of Mařenice” (Mařenická kniha) was published as a samizdat in 1977. It includes texts by Pavel Zajíček, Czech poet, musician, artist and leading figure of the Czech underground. These texts (diary notes, personal comments, reflexions, poetry, lyrics) were written in the first half of the 1970s, during Zajíček’s stay in the village of Mařenice in Northern Bohemia. Only one copy of “The Book of Mařenice” was published. This unique exemplar with its original visual concept is currently part of the Libri Prohibiti collection. 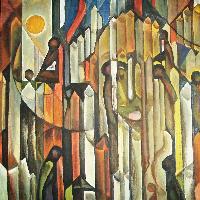 Opanas Zalyvakha's "Zone" ("Zona") is a featured item of the permanent exhibition at the Sixtiers Museum in Kyiv, Ukraine. This painting depicts a crystalline labyrinthine construction, with figures passing in front and outside the enclosure, while others are only able to peer over the tops of volumetric poles, resembling wooden fences that surrounded hard labor camps in Siberia and also the pipes of an organ. Some of these figures blend more readily into the background, while others stand out. The narrow slats between the poles obscure the central figure, who seems to be peering out with eyes downcast and despondent demeanor and is, most probably, a prisoner in the zone. A flurry of figures moves around him in complete anonymity, without the least bit of contact. Art historian Myroslava Mudrak notes that the colors are on the bluish-gray side to underscore the effects of being closed in, and the orange of a setting sun also gives the sense of finality and denouement. The sharp verticality and harsh, repetitive linearity of its component forms gives the painting a sense of tactility—a kind of physicality to the experience of being cut off from everything.

Fellow dissident Mykhailo Horyn' considers the verticality of Zalyvakha's paintings to be an indicator of the latter's general philosophy. "There is almost no horizontality to his work...the vertical rays produce a rhythmic-energetic pulse... giving his canvasses a sense of higher meaning and purpose." Another fellow dissident, the literary critic Yevhen Sverstiuk, compares Zalyvakha's approach to that of the poet and political prisoner Vasyl Stus, who always sought "to dig deeper rather than wider." What Stus expressed semantically, Zalyvakha portrayed visually, "hands and forms outstretched, reaching toward the heavens to a higher power, the only force that could defend the individual against tyranny."