59 featured items found
Items per page:       «« previous page 1 2 3 4 5 6 7 8 9 10 ... 11 12 next page »»
Candidate, documentary film, 1981
The first documentary created by the independent film makers, connected to the Television Agency "Solidarity" and later to the Video Studio Gdansk. "Candidate" was directed by Marian Terlecki. It follows the story of the first elections for the President of the "Solidarity" Trade Union during the I Congress of its delegates in Gdansk in 1981. The elections were an ersatz of democracy; a first occasion to freely make decisions, without an interference of the socialist authorities. The documentary shows backstage of the elections, differences inside the oppositions, tense atmosphere and the beginnings of careers of today's public figures. "Candidate" is a unique document of historical events.
read more 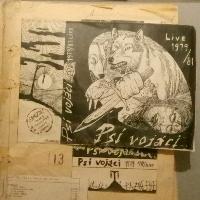 The Audiovisual Section of Libri Prohibiti contains three “books” – sheaves of paper – made from covers of cassettes of unofficial music groups from 1980s Czechoslovakia. The sheaves were made by the State Security (StB) from items confiscated during the prosecution of Petr Cibulka, a political activist and collector. During the 1980s, Cibulka recorded both concerts and amateur studio recordings, which he then produced and distributed in his samizdat record label S.T.C.V. (Samizdat Tapes & Cassettes & Video). Cibulka’s collection – hundreds of recordings and covers – was probably the biggest private collection before 1989. Cibulka was, because of these activities, sued in 1988 and imprisoned for “unjust enrichment” and his collection was confiscated by StB. The sheaves should have been evidence of his activities. A lot of original cassette covers were made from photo paper. The “books” therefore testify to the originality of producers of samizdat recordings. The item was presented on the travelling exhibition COURAGE “Risk Factors: Collections of Cultural Opposition” between 21 September and 28 October 2018 in the National Monument in Vítkov, Prague. 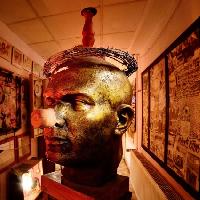 Cathedral of Socialism
The installation, previously known as Vittoriale of the East Germans (das Vittoriale der Ostdeutschen), critically addresses GDR period captured in German museums that thematized socialism after 1990. In the same token, it critiques the writing of history in post-reunification Germany.

The installation was created by Richard von Gigantikow in 1990 and it includes objects created and collected before 1989. The largest share of the objects included in the installation were collected in 1990 from the vacant Central Committee of the FDJ (Free German Youth – the once official youth movement of the GDR) located at Unter den Linden in Berlin. A great part of this collection includes devotional objects of socialism, such as the GDR flag and statues, which have been recontextualised by the artist.
read more 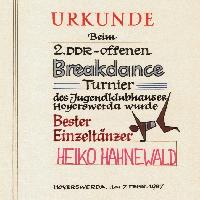 Certificate of participation at the Second GDR-wide Breakdance Tournament, 1987
The authorities were able to institutionally integrate the breakdancing movement relatively quickly in the GDR by stressing its anti-imperialist undertones. As is documented here from the Hoyeswerda youth clubhouse official dance competitions were held throughout the country. This certificate was produced with a noticeable attention to and love for detail.
read more 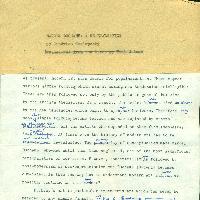 Chalupecký, Jindřich. Marcel Duchamp: A Re-Evaluation, 1981. Typescript
Czech literary and art critic and theoretician Jindřich Chalupecký was interested in the work of French-American painter and sculptor Marcel Duchamp. In 1969, as the head of the Václav Špála Gallery in Prague, Chalupecký organised an exhibition dedicated to Duchamp. Later, during the so-called normalization period, Chalupecký was banned from publishing. However, some of his texts were issued in samizdat volumes or abroad. This was also the case with his article about Marcel Duchamp entitled “Marcel Duchamp: A Re-Evaluation” which was published in the journal Artibus et Historiae in 1985. The text was translated into English by Canadian writer and translator Paul Wilson, who had been living in Czechoslovakia since 1967 and was expelled from this country in 1977.