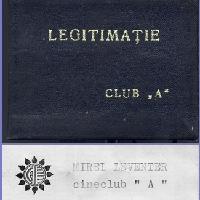 Club A, Membership card and badges, 1970

The Architecture students’ Club A was a unique club in Communist Romania, a club in which it was possible to organise non-conformist concerts, shows, and debates that would immediately have been forbidden in communist Romania if the public had been allowed unrestricted access. Events organised at Club A were only open, however, to members of the club and their invited guests, only one per member, and membership was restricted to Architecture students. Consequently the Club A membership booklet had a value in itself. At the same time, the exclusivism of the club had a direct influence on the quality of the events organised there, as they became an alternative scale of recognition of the value and professionalism of the protagonists. The Mirel Leventer private collection contains a number of small objects indicating his membership of the Club A community in Bucharest, which respected with great care the criteria for inclusion in this exclusivist club. Among these insignia is his membership booklet, made like all such documents in the time of communism from pressed fabric; the date of issue is 1970. The cover of the booklet is light blue, and inside are presented all the privileges enjoyed by a member of Club A, together with the duties: free access to the club; the right to invite someone else once a week; participation in establishing the programme and at intervals in keeping order. These few rules made Club A a little exclusivist island, in which only a few could enjoy freedom. At the same time, these rules enabled the continuous functioning of the club until the fall of communism. It would immediately have been shut down if by accepting those who were not Architecture students its membership had grown rapidly and turned this exclusivist cultural experiment into a mass phenomenon. Finally, the collection also includes a Club A emblem made in ceramic and a number of badges: three from before 1989 and another three from after 1989. “What did it mean to be part of this world of Club A? It was something extraordinary in terms of social status. We were, if I may say so, in the student aristocracy. We were envied, very much envied. There were several attempts to close Club A; we were lucky, but we also had support, there, somewhere, higher up. Mac Popescu, he especially, managed to protect this institution where freedom was often exercised,” says Mirel Leventer.

This collection includes more than one hundred pieces, of various sizes, of cake forms and tube pans, which date from the nineteenth and twentieth centuries. Such items are emblematic for the Hungarian folk art and craft works. They represent two types of objects: of practical use and of decorative purposes. Traditionally made cakes used to be pressed and baked in these brass or copper objects. These cakes were an obligatory presence during the Christmas celebrations in Hungarian villages, which the atheist communist regime strongly discouraged. These forms could have been used only in clay lined bake ovens, so their practical purpose was already vanishing away, once the communist modernisation fundamentally changed, beginning with the 1960s, all rural areas of Romania. Also, these forms were handcrafted in long-vanished workshops by coppersmiths who used the traditional techniques of working these soft metals. In short, these copper and brass objects are symbols of the Hungarian traditions of arts and crafts in Transylvania, which the Romanian communist regime had little interest to preserve. Without the private initiative of Countess Bethlen, most of them would not have survived until the present day. 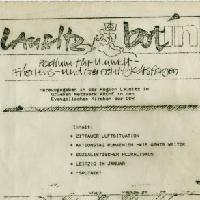 Collection of Samizdat-Journals
The Großhennersdorf environmental library holds one of the largest stocks of GDR Samizdat magazines. Among them is the "Lausitzbotin" (Lausatian Courier), also produced with the support of the then environmental library. It appeared from 1988 to 1989 and contained three issues. Its name was inspired by a newspaper banned by the National Socialists in the 1930s.
read more 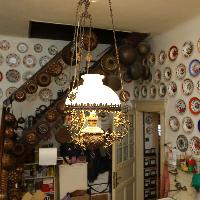 The stoneware collection counts more than 500 pieces of various sizes, especially but not exclusively from the nineteenth century Hungarian folk art and handicraft. The collection primarily contains local products from the Transylvanian pottery and ceramics centres, such as the former Bornemissza family porcelain manufactory from Gurghiu, hand-painted craft items from Northern Hungary (Hollóháza, Miskolc), Slovakian Highlands (Prešov/Eperjes), or Lower Austria’s Wilhelmsburg. These kind of art works objects had today the sole purpose of public use and decoration. Until the early twentieth century, however, the ordinary pottery was used for cooking and as table dishes in the rural environment. From this evolved the ceramic art and within that – after the stoneware were unable to fulfil the multiple directions of the user requirements – the fabrication of peasant decorative pots. In the past, the production and subsequent circulation of such objects were determined by the presence/absence of the main road junctions, and of the necessary raw materials and human expertise. The shapes and the decorative motifs have been handed down from father to son, from hand to hand, and some of the masters learned the traditional crafting which they carried out with a specific procedure. They rarely pressed into their works the name of the creator. Notwithstanding, they managed to leave an indelible trace of the multi-ethnic past of Transylvania. It is remarkable that the Hungarian Countess Bethlen did not focus on collecting exclusively Hungarian objects of handicraft art from her native region, but deliberately included items originating from other regions and produced or preserved by other ethnic groups. Her endeavour is consistent with the views of the pre-Trianon Hungarian liberal aristocracy, of which she is among the last descendants. Such view stands against both Hungarian and Romanian nationalisms. At the time it was created and for the context in which it was preserved, this collection represents an alternative vision on Transylvania than that promoted by the Romanian communist and nationalist regime. 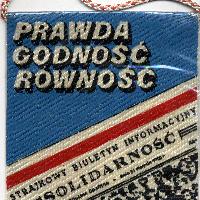 Collection of burgees of the "Solidarity" Labour Union
A collection of pennants gathered by Polish and foreign archivists of the National Commission of "Solidarity". It comprises pennants from private and institutions’ collections, such as company commissions from different branches of industry and economy. Although the majority is related to the "Solidarity" Trade Union, some of them are linked to important personalities of Polish politics and social life of the 1980s. The collection illustrates the symbols and the metaphors used by democratic opposition members to promote their ideas.
read more
26 - 30
«« previous page 1 2 3 4 5 6 7 8 9 10 ... 11 12 next page »»