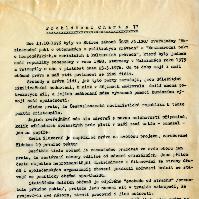 The Basic Declaration of Charter 77 of 1st January 1977 on the Causes of the Origin, Purpose and Targets of Charter 77, which on the Holiday of the Three Kings on January 6th, 1977, the playwright Václav Havel, the actor Pavel Landovský and the writer Ludvík Vaculík were issued to the Office of the Federal Assembly, Czechoslovakia and the Czechoslovak Press Office. On the way to Prague's Dejvice, their chase was ended, and the StB members caught up with them and they were then, detained by state security. The three were released later in the evening, apparently in response to the news which travelled abroad. The published Declaration of Charter 77 had given rise to a number of restrictive measures by the Czechoslovak regime. Its signatories were subjected to a constant persecution of the regime through police surveillance, house searches, job cuts, seizure of passports, detention, physical violence, imprisonment or expulsion from the country. 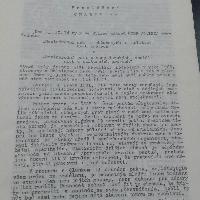 Charter 77 (Charta 77 in Czech and in Slovak) was an informal civic initiative in communist Czechoslovakia from 1976 to 1992, named after the document Charter 77 from January 1977. Founding members and architects were Jiří Němec, Václav Benda, Ladislav Hejdánek, Václav Havel, Jan Patočka, Zdeněk Mlynář, Jiří Hájek, Martin Palouš, and Pavel Kohout. Spreading the text of the document was considered a political crime by the communist regime. After the 1989 Velvet Revolution, many of its members played important roles in Czech and Slovak politics. We do not know when and under what circumstances this copy of Charter 77 Declaration was brought to Mr. Šufliarsky's collection. 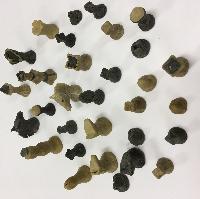 Chess pieces made of bread by Milan Šimečka

Milan Šimečka made the chess pieces using bread in the prison where he was taken after the capture of the exile literature caravan, which was sent from London by Jan Kavan. Milan Šimečka spent one year in prison and during this period he wrote letters that were preserved and later published in samizdat editions. He also spent some time playing a game of chess using pieces he made from bread that had been given to prisoners. 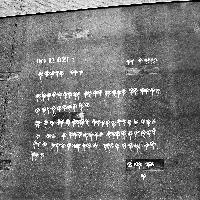 The photo shows probably the first artistic mural in Poland, made by Christian Wabl in 1973, during the Fifth Biennial of Spatial Forms Cinema Laboratory (Kino Laboratorium) in Elbląg. The mural showing "a letter to the people" made of flowers' pictographs instead of letters of the alphabet was painted on the wall of the Mechanical Works Zamech company. Tomasz Sikorski made the photo during the Biennale in 1973. 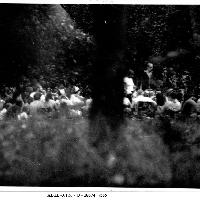 The alternative religious group Christian Community organized a camping excursion in Vas County by the Szajk Lakes on 11–21 August 1983. State security agents camouflaged as –vacationers took photos of this event. The typical photo exemplifies the methods used by the secret police observers, who hid behind trees and bushes. The photographs did not enable the police to identify any of the participants or to prove that they were engaged in any illegal activity.