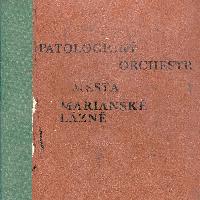 A highlight of the collection is a dossier named Hronologija događaja u vezi sa ‘Slučajem’ nastavnika i saradnika Filozofskog fakulteta u Beogradu 1974-1981 [The Chronology of Events Related to the Case of Professors and Associates of the Faculty of Philosophy in Belgrade 1974-1981]. At that time, in addition to Tadić, the following employees were also removed from the faculty: Zagorka Golubović, Trivo Inđić, Mihailo Marković, Dragoljub Mićunović, Svetozar Stojanovic, Miladin Zivotić, and Nebojša Popov.

The dossier is located in box no. 1, file no. 65, and contains hundreds of pages related to the problems the professors faced while trying to maintain their positions at the faculty. Here, one can gain insight into the arguments professors used to defend themselves and contend with the Teaching—Scientific Council of the Faculty of Philosophy). The Faculty of Philosophy supported the accused by holding that it always advocated for the "further development of the freedom of scientific thought and scientific-teaching work, as the great achievements of our self-managing socialism." Also, in these documents the Faculty explained that it accepted the implementation of the “act on moral-political suitability of instructors”, however, it could not find fault in their actions. The Council of the Faculty of Philosophy emphasized that the removal of teachers was a direct assault on the university itself and that it will take "a lot of time and patient work to overcome the consequences of this act."

In the collection, one can also review the laws that the professors referred to in support of their political demands (e.g., Law on change and amendments about the Higher Education). Furthermore, this folder allows us to follow the fight at the Constitutional Court in which the professors initiated the legal procedure to assess the constitutionality of their dismissal, as well as the reaction of the Constitutional Court, which rejected the move.

Last but not least, the material documents support for their struggle from international institutions and prominent individuals from around the world, especially from the field of philosophy. Domestic support was chiefly found from writers of the Praxis journal (as documented in this collection), which was shut down shortly after the court case.

The most valuable document is Obrazloženje predloga odluke o stavljanju na raspolaganje nastavnika i saradnika Filozofskog fakulteta [Explanation of the Proposal for a Decision on Releasing Professors and Associates of the Faculty of Philosophy] of the Executive Council of the Parliament of Serbia (8 January 1975). It states that the activities of the professors were repeatedly criticized by the Alliance of Communists and the Presidency of the League of Communists of Yugoslavia. It also states that their articles and books had already been banned by the courts several times, thus alleging that they were previously problematic.

This was meant to confirm the discussion in the Serbian Parliament, which had concluded in 1970, when the case of this group was discussed, that "their actions are contrary to the values ​​and practices of our socialist society and the basic principles of the Constitution, self-managing development and politics of the SKJ [League of Communists of Yugoslavia]." Additionally, the Assembly concluded that "the continuous negative political activity of these professors makes them morally and politically responsible for the state of affairs at the Faculty of Philosophy, because they perform the function of upbringing and educating of young generations.” It furthermore stated that this group "has abandoned its revolutionary Marxist view of the world by its actions and is in open ideological and political conflict with the League of Communists of Yugoslavia." These were serious accusations at that time.

The League of Communists also stated that the Faculty of Philosophy rejects the assessment of their "negative behavior" and therefore, the Faculty has "disturbed the self-management relations" and "severely damaged general social interests". All this served as an explanation and justification why exactly the Socialist Republic of Serbia’s National Assembly had to bring the decision. The goal of such decision was, as they stated, to "create opportunities for overcoming the problems that were experienced at the Faculty and in general". This was an unprecedented event. 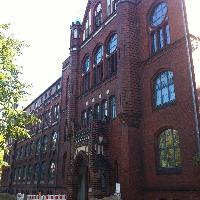 In the GDR, child care and education were firmly in the hands of the ruling SED party, but in 1950 the protestants were allowed to open a seminary on the Island of Hermannswerder, near Potsdam. First, it offered men, and from the 1950s women banned from attending regular secondary schools, the opportunity to obtain their secondary school leaving qualification (Abitur), enabling them to study theology or church music. In the GDR pupils were often prohibited from attending secondary schools for religious and/or political reasons. It was particularly common for the children of clergy members to attend the seminary.

In addition to a growth in the school size during the 1970s, the curriculum also changed. It then included more subjects that were not part of theological education, for example the possibility to focus on modern languages. From 1982, the school even adopted the curriculum of North Rhine–Westphalia (West Germany) as part of their leaving qualifications.

The State Security Service (Stasi) constantly had their eyes on the institute and commonly conducted searches for forbidden material. “Youth Sundays”, taking place yearly from 1949, were a huge thorn in the government’s side. During these events, young people discussed, away from the official socialist apparatus, how to lead a Christian life. Even an eventual ban could not stop the meetings as even without official announcements, meeting times were simply passed on by word-of-mouth.

Apart from “Youth Sundays”, the island was also home to church synods and later environmental gatherings and bicycle “star rides”. These are events in which the participants start at different locations, all meeting at the same spot in the centre thus forming a star. In Germany they have taken place since the 1970s to bring attention to different causes, such as the environment.

After reunification, anyone who graduated from the school was retroactively granted the right to study anything, not just theology and church music. Today it is a Protestant secondary school.
read more 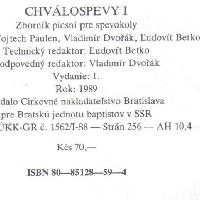 Chválospevy
Although the Chválospevy I [Hymns I] collection of hymns for choirs of the Unity of the Brethren Baptists was released in 1989, congregations in Slovakia used the music circulated in hand-copied and photocopied version, as the title page of the collection states on p. 5: “The hymns are collected in various ways and the choirs then lend them to each other and exchange them, they translate, transcribe and reproduce them, or only copy them.” (p. 5) The anthology was published officially. Its preparation took several years, and it represented a compromise between what the Baptist choirs used in practice and what the scope of the possibilities of the Ecclesiastical Publishing House in Bratislava was.
read more
Ciliga, Ante. "The state crisis of Tito's Yugoslavia", in Croatian, 1972. Manuscript

The manuscript of the article was written after Tito purged the Croatian communists at Karadjordjevo in December 1971. Actually, it was a precursor for Ciliga's work when he published it in Italian under the same title. Ciliga described Yugoslav crisis as a complex whirlpool of political and economic problems. He argued that it was not only the national question that had provoked the state crisis, but also self-management socialism as a model of state capitalism. He saw Yugoslavia headed toward evident collapse and possible new interethnic wars in the absence of political pluralism, wide democratization and a loose confederation. Finally, he advocated for the demise of communist power and the transformation of Yugoslavia from a dictatorship to a democracy and its transformation into a de facto union of sovereign states.