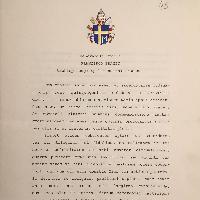 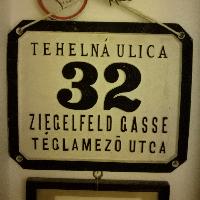 Popisné číslo prvého otvoreného ateliéru
Tehelná street where the 1. Open atelier took place. Rudolf Sikora is not the author of this artefact. Nevertheless, he holds it in his personal collection as an object of commemoration to his formative period as well as to a notable artistic act from the beginning of the “normalisation era”. Afterwards, this plate had become a source of inspiration for the creation of the commemorating plate, referring to the five-year anniversary of the 1. Open atelier.
read more
Popović, Koča. Metal cross, 1938. Painting

The avant-garde painting Metal Cross by Koča Popović from 1938 is an artefact which demonstrates the continuity of artistic alternatives closely associated with the culture of dissent. Associated with the founder of surrealism, Andre Breton, Popović was one of the main promoters of this trend in Yugoslavia. Although a member of the highest circles of the communist government (until 1972 he was one of the closest collaborators of Josip Broz Tito), Popović supported and protected avant-garde artists such as Trokut. 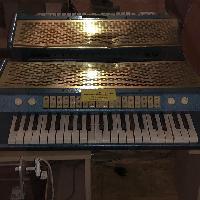 An item from the Popmuseum’s collection is an Ionika keyboard which was produced in the GDR between 1958 and 1965. It was likely the first instrument of its kind made in the Eastern Block. The instrument, among the Czechs and Slovaks, known as “jonika”, was used by a wide range of bands in Czechoslovakia in the 1960s. One of the bands that used this instrument in the first half of the 1960s was, for example, Kometa, one of the first rock’n’roll, twist and big beat bands in the Czechoslovakia. It is said that the instrument often overheated during concerts, thus it was necessary to tune it before every performance. There were not many “jonikas” left after the arrival of better instruments. This is why the Ionika in the Popmuseum’s collection can be seen as rare and it is a unique example related to the roots of rock music in Czechoslovakia.

read more
Portrait of an Unknown Man by Jacek Fedorowicz
Graphic was created by Jacek Fedorowicz as a humoristic answer to the authorities efforts to discredit Lech Walesa as the leader of democratic opposition. To diminish Walesa's influence, the regime addressed him in the media as a "private person". It inspired Fedorowicz to draw a portrait of him, which he signed: "Portrait of an unknown man with a moustache. Second half of a 20th century". The graphic very quickly reached common recognition and was reproduced on posters and in underground publications.

The graphic was rediscovered in 2016 and used again by political activists, who defended Lech Walesa in ongoing conflict between him and the members of ruling Law and Justice party. During anti-government protests in February 2016 this graphic was visible on the posters and pins. One of the most popular Polish newspapers, Gazeta Wyborcza, in the issue from 27 February 2016 placed this graphic in a size of a poster, which was an expression of support for the protesters (http://bialystok.wyborcza.pl/bialystok/1,35235,19683962,portret-nieznanego-mezczyzny-z-wasami-w-sobote-plakat-z-wyborcza.html?disableRedirects=true).
read more
61 - 65
«« previous page 1 ... 9 10 11 12 13 14 15 16 17 18 19 next page »»