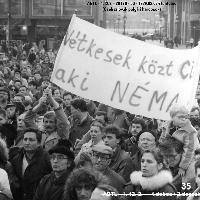 Protest against the persistent imprisonment of civil activists, 1989. Photo

A “Protest against the persistent imprisonment of civil activists,” for example against Vaslav Havel’s arrest, was held on 2 March by numerous alternative organizations and parties. Between 400 and 600 people protested on Vörösmarty Square. One of the photos, one can see a banner with the sentence “Silence is complicity.” This photo was probably taken by István Kurta. 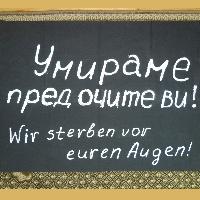 Protest flag „We Are Dying in Front of Your Eyes”

The material belongs to the final stages of the ecological protests – in 1990 and 1991. The request for international assistance on resolving the environmental problem was one of the ways, sought by the citizens of Ruse in finding a solution to their predicament. Along with numerous petitions to international organizations and media that covered the issue, this bilingual black banner with white-paint letters was one of the most direct expressions of the desire for international help.

The banner was donated by Iskra Pencheva, a participant of the ecological protests, to the Rousse Regional Museum of History in 1991. 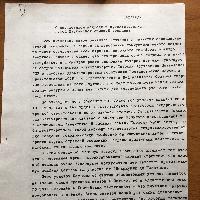 Protest letters against construction of Pļaviņas HES in 1958

The petition from the 55 public figures about the preservation of the valley of the River Daugava as a result of the construction of the Pļaviņas HES. 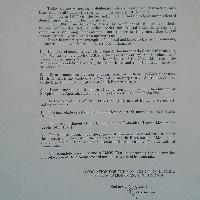 Protest message of the International Association for the Protection of Monuments and Historic Sites in Romania, in French and English, Paris, 1985

This document reflects the way in which the Romanian exile community organised itself and acted to promote media coverage in the West of the urban systematisation project of Ceaușescu's regime, which tacitly involved the demolition, mutilation, or destruction of the national heritage. The protest message was shared when the International Association for the Protection of Monuments and Historic Sites in Romania was founded in 1985, in Paris. The purpose of the association was to draw the attention of political decision-makers and international public opinion to the communist regime's plan for the demolition of the architectural and urban heritage of Romania. The actions undertaken within the Association focused particularly on the promotion of media coverage of the demolition of the city centre of Bucharest, which the communist authorities planned to reorganise according to their architectural vision. On the occasion of its foundation, the association organised a protest on the streets of Paris, during which it distributed a protest message to participants and passers-by with texts about communist Romania accompanied by photographs of historic monuments destroyed by the communists or scheduled to be demolished or moved. A copy of this protest message was sent by post to several Romanian exiles in order to convince them to join the Association and get involved in unmasking the communist regime in Romania and, in particular, the urban systematisation project of the Ceaușescu regime. This document was sent by the president of the Association, the architect Ștefan Gane, to Sanda Stolojan, a personality of the Romanian exile, who kept it in her private archive. The document, which can be consulted in the IICCMER collection, was written in English and French, in A4 format. The material, titled "Protest: Romania's historical and spiritual heritage is in danger," briefly outlines the consequences of the Bucharest systematisation project undertaken by the Communist authorities since 1977 and some examples of monuments from the historical and spiritual heritage of the Romanians that had been destroyed, demolished, or mutilated by the Ceaușescu regime. Against this background, the association protested, asking for: a stop to the  demolition of historic monuments and sites in the country; the re-establishment of the Romanian Historic Monuments Commission, abolished in 1977; and the rebuilding, under the aegis of this Commission and with the help of the International Council for the Conservation and Restoration of Monuments and Sites and other international organisations, of the demolished historic monuments and sites. 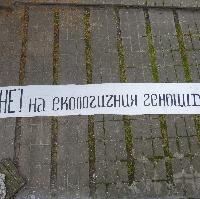 Protest poster "NO! to the Ecological Genocide"

The years of continuing chlorine pollution of Ruse, as well as the lack of visible results from the actions of the local authorities in cooperation with the Romanian authorities, were sometimes interpreted by the locals as a purposeful act against their home town.

In this respect, the call for ceasing the "ecological genocide" does not appear as a dramatic overstate, but rather as an expression of the citizens’ desperation.

The poster was donated by Iskra Pencheva, participant in the ecological protests, to the Rousse Regional Museum of History in 1991.