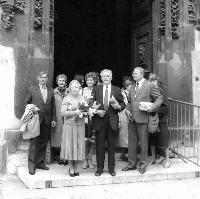 Photos of Golden Wedding of H. Gordon Skilling and his wife in Prague, 1987.

Skilling’s Golden Wedding anniversary, was at the Old Town Hall in April 1987. The journey Gordon Skilling made to Prague in April 1987, marked the celebration of Skilling's 75th birthday and the 50th anniversary of his marriage to Sally. The wedding ceremony was arranged by his dissident friends in the Old Town Hall, which was also the same ceremonial hall where they were married in 1937 (their wedding in October 1937 took place during G. Skilling’s first time in Czechoslovakia, where he studied the History of Central Europe as a student of London University). The anniversary celebration was a delicate irony in which the guests were fond of - a tribute to the "enemy of the state" because the Communists had released a number of dissidents which they had not known about. The next day in the Prague Evening, the news appeared, with a somewhat funny title, "Wedding Overseas". Jiřina Šiklová gained a great credit for this, because she paid the newspaper editors with the make-up from Tuzex at that time.

Gordon Skilling himself remembers this after years in an interview with Lidove Noviny in June 1993: "It was an interesting ceremony because perhaps all Czech dissidents - Havel, Pithart, Dienstbier and others - were present. It was strange that, in this honest ceremony, the chairman of the National Committee for Prague 1 spoke about what I did for Czech history. But he did not know that I also wrote a book about the Prague Spring, a book on Charter 77 and other things. He did not know it, and so he was very glad. Absurd situation. But the dissidents liked it. They were smiling internally. And then we had a gala dinner at the Municipal House. I like to recall the event." 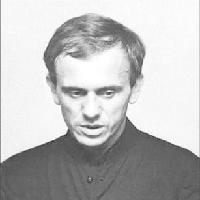 Photos of Reverend Jerzy Popiełuszko
Erazm Ciołek had a close relationship with Reverend Jerzy Popiełuszko (1947-1984), a Roman Catholic priest and staunch supporter of the Solidarity movement, who was abducted and murdered by security police in October 1984. The crime galvanized Polish society, shocked international public opinion, and had a surprising resolution. The three direct perpetrators and their supervising officer were arrested, tried, and sentenced to long prison terms by the General Jaruzelski government. However, security officials responsible for the crime were never brought to justice. Some 250,000 people attended the funeral of Popiełuszko, the largest public protest against the communist regime since the imposition of the martial law in December 1981. In 2010, the Roman Catholic Church beatified Reverend Popiełuszko.
The sixteen photographs by Erazm Ciołek documented the life, death and funeral of Reverend Popiełuszko. They were quickly assembled into an exhibition, which went on display in nine churches. Ciołek's photos gained enormous popularity and contributed to the spiritual cult of Popiełuszko and his transformation into a religious martyr. Ciołek's photos are also part of the permanent exhibition of the Museum of God Servant Reverend Jerzy Popiełuszko located on the grounds of St Stanisław Kostka's Church, Popiełuszko's last parish in Warsaw.
read more 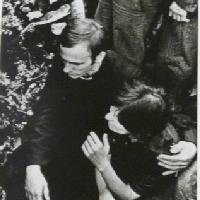 Photos of the funeral of Grzegorz Przemyk in 1983
In 1983, Erazm Ciołek attended and photographed the funeral of Grzegorz Przemyk, the nineteenth-year-old son of Barbara Sadowska, a Polish poet and opposition activist. Przemyk was detained and then beaten to death by communist police in Warsaw in May 1983. The regime covered the crime up by arresting, incriminating and sentencing paramedics who transported the dying Przemyk from his home to hospital. After 1989, there were several unsuccessful attempts to bring Przemyk's murderers to justice. Barbara Sadowska died in 1986 whereas her friend, Reverend Jerzy Popieluszko, was assassinated by security policemen in 1984.
Przemyk's funeral was attended by tens of thousands of people, possibly the largest public gathering during the martial period, which lasted until 22 July 1983.
Ciołek's photos show the scale and drama of public response to Przemyk's death in Warsaw. His photo of Barbara Sadowska being comforted by Reverend Popiełuszko remains one of the most moving images of the martial law in Poland. Ciołek's footage of Przemyk's funeral was assemblied into an exhibition and put on display in twelve Roman Catholic churches. Later, it was published in various editions of Erazm Ciołek's work.
read more 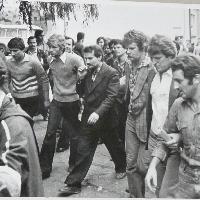 Photos of the strike in the Lenin Shipyard in August 1980
Erazm Ciołek went to cover the strike at the Lenin Shipyard in August 1980. Not only did he witness and document the birth of the Solidarity movement, but also completely converted to the cause of the striking workers. His photos taken in Gdańsk in 1980 mark the beginning of Ciołek's role as the photographer of the Solidarity movement and the democratic opposition in Poland in the 1980s. He created some of the most iconic images of the 20th-Century Polish and European history, visualizing the workers' and social protest that gave birth to the movement, which decisively contributed to the collapse of Communism in East Central Europe. Ciołek's photos taken in Gdańsk in August 1980 have been reprinted worldwide ever since.
read more
Plenary Meeting of the Latvian Communist Party Central Committee on October 9-10, 1957: On Work with Intelligentsia. Stenographic account

The stenographic account of the plenary meeting of the Latvian Communist Party Central Committee (LCP CC) that took place on 9-10 October 1957 shows most vividly the confrontation between the conservative faction of the LCP and its more liberal part, especially regarding the situation in literature, the applied arts and journalism, and the mood of the intelligentsia in general. This confrontation was influenced by the 1956 events in Hungary and Poland. Most CC members speaking at the plenary meeting represented the conservative faction, complaining about the ‘formalism' and ‘bourgeois nationalism' cultivated by artists, as well as the indirect support for the liberal tendency by many Moscow functionaries. However, the mood at the meeting was that the conservatives at that moment were on the defensive, but they managed to strike back in July 1959, when the liberal faction was defeated.