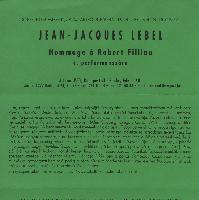 Lebel, Jean-Jacques. Hommage a Robert Filliou, 4 April, 1998, Artpool P60. Performance
Performing in the space of Filliou’s reconstructed Poipoidrom, Jean-Jacques Lebel (one of the first European happeningers), informs the audience of the installations history to music performed by a live Roma band. (Many foreign curators and art collectors were present in the audience, as they were enjoying a short visit to Budapest). Lebel pointed to the freedom of art and the ineffectiveness of museums (the installation was kept in storage in a museum between 1976 and 1998 without being displayed on a single occasion). Lebel drew attention to the ability of the Galántai-Klaniczay partnership “to make things happen,” and he also expressed his deep appreciation of the underground era of Artpool.
read more 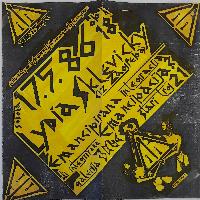 Lecture about emancipation of women in Ljubljana, 1986. Poster

As an engaged feminist Lydia Sklevicky held public presentations in the Yugoslav centres of the new feminist movement, Belgrade, Zagreb and Ljubljana, in which she advocated for the greater presence of the "women’s question" in public and scholarly circles, constantly emphasizing that this question  had not been resolved within the Marxist and socialist political order in Yugoslavia.

One of the lectures Sklevicky held was on the topic of "Emancipated Integration or Integrated Emancipation" in the ŠKUC Gallery (Old Square 21) in Ljubljana on Saturday, May 17, 1986. The lecture was organized by the first Slovenian feminist club, Lilit,  and the poster for it stated that the lecture was intended strictly for women. The poster is kept in the Sklevicky Feminist Collection. 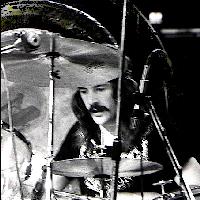 The pirate records of Led Zeppelin’s first concert constite a special part of the holdings of the music collection. Péter Hont acquired the recording as private property when the collection was eliminated in the early 2000s. 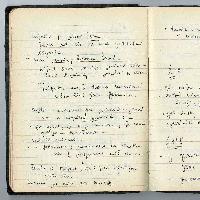 Jiří Lederer's personal memos are from the meetings, consultations and sessions, especially from the Union of Czech Journalists from 18 April 1969 to 22 August1969. The book ends with notes from the events of the 1st anniversary of the occupation of Czechoslovakia by the Warsaw Pact troops.

These notes capture the thoughts and encounters with various people during these dramatic days, as well as the feelings of Jiří Lederer, a prominent journalist, dissident and eventually an exile.

In the notebook remarks on Husak, Svoboda and Cernik, as well as known Czech writer Seifert, can be found in addition to short notes on the "silent demonstration" on Wenceslas Square on August 21. These notes serve as a unique example of journalist scriptures from the dramatic August events of 1968.

read more
Legal documents on special issue of "The Student" of 25 June 1968
The documents in this folder contain valuable testimonies about the student demonstrations in Belgrade, where intellectuals and students joined forces and turned against the authorities. The documents listed here are an important component for chronicling the events that marked the student movements in Yugoslavia. Popov's collection is of special value for research on the court cases related to the banning, confiscation, and subsequent destruction of the Special Issue No. 5 of “Student”, the main journal of the student population at Belgrade's University during the demonstrations in June 1968. In Box No. 11, in the folders called 'District Court Decisions', July 18, 1968, twenty court documents pertain to the case of Special Issue No. Four, 25 June 1968.

In the decision of the Belgrade District Court on June 28, 1968, it appears that the court banned the further distribution of “Student”, and furthermore could not decide what to do with the already confiscated issues. However, several weeks later on 18 July, it was decided that all confiscated samples of the journal would be destroyed “by being processed by the paper factory in Belgrade, with the appropriate compensation that will be put into the budget of the city of Belgrade as […] surplus income” (Kv. 752/68). Although the original document containing a detailed explanation of the ban is missing, it is still possible to reconstruct events by inspecting the available materials. This file also contains an appeal to the District Court, stating that the court's decision was unfounded because facts were incorrect, and the court “extracted incriminating sentences, individual expressions, and even only certain words from the articles so that the resulting conclusion was completely different than the original information”(Kr. 93/68, Belgrade District Court). One of the accusations of the court was that the texts in this issue suggested “a severe revolt against the working class and other working people in our country,” which is cited in the appeal as absurd.

Other documents reveal that the appeal was rejected by the Supreme Court on the grounds that usually, “an article in the press is absorbed by the reader as it was written without any additional explanation by the writers of the article.” (Kr. 996/68). The Supreme Court's ruling indicated that the writers of the article were, “stressing certain negative phenomena, and such generalization of these phenomena, which depict our socio-political system entirely as backward, hopeless and stale, cannot be understood differently than to express and disseminate such distorted news and insights in order to cause peoples' unrest”.

Particularly problematic is the last sentence in the article Mystery and Hysteria by Nebojša Popov, which says “who can not listen to a song, will listen to a storm,” which can be interpreted as spreading of alarming news to threaten  “public order and peace” and as a “threat of new unrest” (Kr. 996/68).