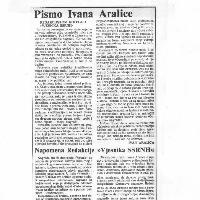 At the beginning of August 1985, Ivan Aralica wrote a statement to the editorial board of Vjesnik regarding the campaign and accusations that were levelled against him due to the Ivan Goran Kovačić Award. In the text, he did not refute the political qualifications concerning his former activities at the time of the Croatian Spring, after which he had realised that political work is not for a writer. Aralica pointed out that in the scholarly and colloquial terminology there was no distinction between the term “nationalism” and “chauvinism.” He noted that the term “national” replaces “nationalist,” and that “nationalist” is the same as “chauvinist,” and that the latter qualification had been imposed upon him, which he could not accept because any hatred toward man or a nation was totally foreign to him.

He stressed that to him it is quite strange that the author is separated from his literary work and concluded his defence by saying: “Should I say that I do not demand any political rehabilitation for myself […] I am horrified with the idea that I would hate someone, I feel deep regret for those who hate someone. Hatred makes me unhappy, even when I am not involved” (Vjesnik, 3 August 1985). 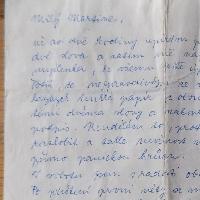 This letter from Juliana Jirousová (then Stritzková) to Ivan Martin Jirous, the key figure of the Czechoslovak underground, from 10 September 1974 is the first of the letters stored in the library Libri Prohibiti. This letter was not sent to prison, unlike the rest of the collection. This is perhaps why it has not yet been published and is unknown to most people. The letter was written before the wedding of I. M. Jirous and J. Stritzková in 1976 and was not the subject of censorship. There is some interesting information about relationships in the underground, friendships, as well as the everyday life which I. M. Jirous and Juliana Stritzková led. In the letter, Stritzková mentioned songs by Karel Soukup (alias Charlie, a Czech underground songwriter), the married couple the Daníčeks (Jiří Daníček was a poet, playwright, script writer, translator and political prisoner. His wife Vlasta, called Amálka in the letter, was Juliana’s best friend), and also about the psychiatric sessions Jirous had to attend.

One letter in the collection was written by Kersti Kaljulaid, the current president of Estonia, who was a schoolgirl and the secretary of the Student Scientific Association at the time. The letter is one of the most restrained in the collection, as some of them are very emotional and even angry. In her two-page letter, Kaljulaid considers the potential dangers to the living environment. Unlike many other letters, Kaljulaid does not touch on the national question in her letter, although like some other writers, she demands a referendum on the plans for phosphorite mines.

The letter is handwritten, and has a few corrections, which means she probably did not write a draft. It was written on February 28, a few days after the relevant episode of the ‘Panda’ television programme.

It is interesting that Kaljulaid does not herself remember ever writing the letter, and assumes that it was the result of a recommendation by members of the Student Scientific Association.

The letter was published in the Estonian weekly newspaper Eesti Ekspress on 5 April 2017. 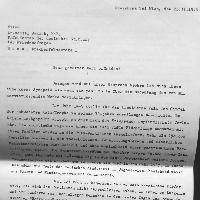 In this letter, Mihajlo Mihajlov asks Edward Kocbek to join the initiative to establish the first free magazine that would not be under the surveillance of the Yugoslav Communist Party. Mihajlov was the head of the intellectual circle in Zadar as a young Russian literature professor who advocated the liberalization of the communist regime. Knowing that Kocbek was an exceptional intellectual authority and that he was in a certain opposition to the authorities, Mihajlov considered him a suitable person for the journal he intended to initiate, which was supposed to advocate pluralism and democracy.