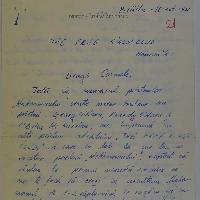 Letter from The Club of the Free Kings to Cornel Chiriac, 15 October 1971

Dated on 15 October 1971, the letter was signed by three members of The Club of the Free Kings. The club was in fact a group of teenagers, fourteen to sixteen years old, who gathered occasionally in order to listen to foreign music. In order to distinguish themselves from their peers, each member of the group took an English nickname and decided to wear a yellow T-shirt with the group’s initials and a flower imprinted on it. They also made badges for themselves with the name of the club, their nicknames, and the word “hippy,” as they wanted to be identified as a hippy group. Because their favourite music programme at RFE was Cornel Chiriac’s programme Metronom, they decided to write him a letter on behalf of the group. In their message, these young people described the impact of Theses of July 1971, which imposed an embargo on foreign cultural products of all kinds: “After the famous date of 7 July 1971 [actually, Ceaușescu delivered his speech on 6 July], a date that will remain forever inscribed in the calendar as a day of mourning, the lives of young people in Romania worsened even more: gone were the beards and the long hair, gone was pop, beat or progressive music. Everything was gone!” (ACNSAS, Informative Fonds, file 3032 vol. 1, f.21). Their letter represented a quite radical criticism of the cultural policies of Ceaușescu’s regime and the economic difficulties the Romanians had to face in their daily life. Moreover, they considered Cornel Chiriac’s show Metronom to be an escape from the grim reality of their lives and a window to “a freer, more beautiful life, a life you would like to live.” In the final part of the letter, the signatories asked Cornel Chiriac to broadcast their favourite songs. Unfortunately for them, the Romanian secret police, the Securitate, intercepted the letter and subjected its authors to an investigation. In the end, the members of The Club of the Free Kings received a warning from the Securitate and had to sign a declaration in which they recognised their guilt and pledged not to get involved in similar activities in the future. 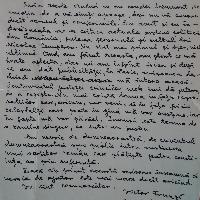 Letter from Victor Frunză to Eugen Ionescu in Paris, in Romanian, 8 September 1978

This letter is an important document for the history of the post-war Romanian exile community because it is a proof of the attempt of a Romanian dissident to establish a connection with the emigration. The purpose was to gain the support of Romanians abroad. If their situation was publicised in the West, then there were chances that once returned to their country they would not suffer the reprisals of the communist regime. Also, such actions were meant to trigger the support of international public opinion in criticising Nicolae Ceausescu's dictatorship. One such example was the action of the Romanian writer and journalist Victor Frunză during a tour in France in 1978. In Paris, he wrote a letter to Eugène Ionesco (Eugen Ionescu), a French-language writer originally from Romania, a representative of the theatre of the absurd and a member of the French Academy. In this document, sent on 8 September 1978, Victor Frunză informed Eugène Ionesco that, in France, he criticised openly the situation in communist Romania, especially the personal power and personality cult of Nicolae Ceaușescu. Starting from the idea that he was not the first Romanian and hopefully not the last to do so, Frunză told Ionesco that his approach was deliberately chosen, in full awareness of the possible consequences for him: "When I did this, I knew what I could expect, but I have defeated my fear (...). The sense of the justice of my criticisms gives me the strength to resist. There is no fear of the reprisals that will come anyway, but in the face of the fears of others who can in my mind support me, and in fact will leave me. Immense is the fear of staying alone, as in a desert." In conclusion, Victor Frunză asked Eugène Ionesco to publicly support his action of criticising the dictatorship and personality cult of Nicolae Ceaușescu.

Nikolić asked Radica, as an outstanding Croatian writer in exile, to be an associate in the newly founded Croatian Review. Later Radica would be his closest collaborator, given his correspondence with Nikolić, as well as his articles and essays in the journal. Nikolić extended his offer of cooperation to Radica because his main goal was to bring together the Croatian intelligentsia irrespective of the partisan, political and ideological differences which otherwise harrowed and fragmented it. The common end was to continue the free cultural development of the Croatian nation when the homeland was under communist rule in order to affirm the Croatian national question through the journal’s pages. In the same letter, Nikolić asked Radica to convince Ivan Meštrović to accept collaboration in his review. Nikolić believed that Meštrović could influence the unity of Croatian emigrant communities with his authority as a great and renowned artist.

read more
Letter from Vinko Nikolić to Croatian émigrés on his incident in France in 1966, December 1966

Nikolić communicated his intention to write a doctoral dissertation on French-Croatian relations at the Sorbonne in Paris. He was granted a temporary one-year residence in France, but the French Ministry of Internal Affairs, through the Paris Prefecture, made a decision on 18 October 1966 to expel Nikolić from France. Nikolić left Paris and France on 27 October of 1966. He warned that the Yugoslav government, through its embassy in Paris, urged France to cancel his residence in France. It accused him before the French authorities of revolutionary activities against Yugoslavia. Contrary to these accusations, Nikolić stressed in his defence that his review is a democratic and universal Croatian periodical that gathers Croatian intellectuals in the free world. On this occasion, Nikolić said that he advocated for exercise of self-determination to the Croatian case as well and that Yugoslavia would also need to agree to hold free elections. In conclusion, he said he supported a peaceful solution to the political crisis with Yugoslav communists and with other people in Yugoslavia. His defence before the French authorities did not bear fruit, and after that he travelled throughout Europe for the next two years, until 1968, when he arrived in Spain. 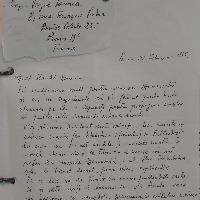 Letter from Virgil Ierunca to Sanda Budiș, in Romanian, 25 February 1985

This letter is an important document for the history of the post-war Romanian exile community because it is proof of the activity of fighting communist propaganda outside the country, as well as of the integration of Romanian culture into Western culture. Such activity was also carried out by Sanda Budiș, an exile community personality, who emigrated to Switzerland in 1973. One of her actions, alongside another representative of the Romanian exile community in Switzerland, the lawyer Dumitru Stambuliu, consisted in supplying the Swiss Library for Eastern Europe in Bern with publications of the Romanian exile community. The starting point of Sanda Budiș’s project was a book donation from Romania, which the Romanian ambassador to Switzerland made to the Cantonal and University Library of Lausanne in 1984. This donation took place during a festivity advertised in the local press. In response, Sanda Budiș took the initiative to donate publications of the Romanian exile community from her personal library to this library, but her donation was denied "for political reasons." Consequently, she addressed the leadership of another institution – the Swiss Library for Eastern Europe in Bern – which served at the time as a documentary fonds for the Swiss Eastern Institute (Institut suisse de recherche sur les pays de l'Est–ISE/Schweizerische Ostinstitut–SOI), an institute that carried out research on communist countries. At the Institute, both the management and the members were Swiss personalities with authority in their field of expertise. The management of this library accepted her donation “with great satisfaction, especially as it is literally flooded by propaganda publications sent free and regularly by the various propaganda officers of the Ceaușescu regime.” In order to counteract the propaganda of the Romanian communist authorities, Sanda Budiș continued her efforts by sending letters to the management of important and representative publications of the Romanian exile community. Among the recipients of such letters was Virgil Ierunca, who accepted her invitation and sent to the library not only newspapers and magazines of the exile community, but also books published by Romanians abroad. Ierunca also responded to Sanda Budiș in a letter in which he congratulated and thanked her for the action she had initiated. The original handwritten letter is to be found today in the Sanda Budiş Collection at IICCMER.