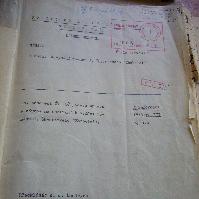 The Central Press Supervision Authority Collection contains materials documenting the prohibition of the novel “The Cowards” by the Czech writer Josef Škvorecký. The novel, written in 1948-1949, depicts the last days of the Second World War in the city of Náchod (‘Kostelec’ in the book) from the perspective of Škvorecký’s literary alter ego Danny Smiřický. The novel was first published in 1958 by the Czechoslovak Writer publishing house and met with much criticism. Škvorecký was accused of ideological muddledness, anti-humanism and cynicism. His depiction of the Soviet Army was also criticized. In addition to a report prepared by the Central Press Supervision Authority for the Central Committee of the Communist Party of Czechoslovakia, copies of some of Škvorecký’s older texts that were unknown to literary historians, as well as records from meetings between the employees of the Československý spisovatel publishing house, Josef Škvorecký and the leadership of the censorship office, are also part of this collection. 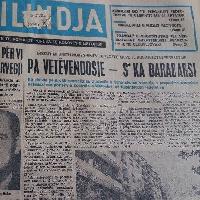 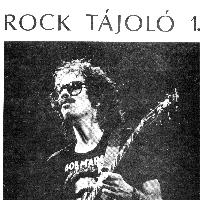 Rock Tájoló (Rock Compass), 1984. Fanzine
The case of “Rock Compass” is a typical example of how a music brochure in the 1980s could be published semi-legally or as a quasi samizdat. A Rock Club hosted by the Youth Club of Pécs since 1983 gave an opportunity for this kind of publication by publishing a kind of information bulletin (or franzine) for its members. The “program guide” printed in 1984 presented, for instance, Laurie Anderson and the second album of the band Bikini (“Twentieth-Century Newsreel”), and it also published an article by Koszits on the local event Art Rock New Wave Festival, which included a concert by the band Trabant. It is astonishing that printed material like this could be published at the time with neither preliminary and nor after-the-fact permission from the censors. The afterlife of ’Rock Compass’ was nevertheless strange, since there was also a survey published on club members’ interest in the bulletin, which, for some reason, caught the attention of the local police. Koszits was interrogated some secret agents responsible for “the protection of youth.” They asked him several questions about new trends in music, including punk, new wave, hard rock, and especially black rock, which the authorities regarded, because of its name, as somehow the most dubious novelty. Koszits eventually managed to calm them and reassure them that the Rock Club in Pécs was not a meeting place for Satanist kids. Still, this remained the one and only issue of “Rock Compass,” and Koszits and friends could not publish any more issues.
read more 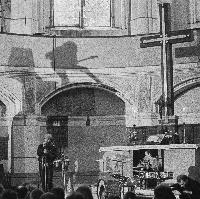 Rock concert in Zionskirche
Zionskirche (Zion Church) in Prenzlauer Berg was a place where numerous rock and punk concerts and youth meetings took place on a regular basis. This black and white picture captures the singer André Greiner-Pol in concert together with the guitarist from the rock band Freygang. The band, established in 1977, continues to give concerts, despite the passing of its lead singer André Greiner-Pol in 2008.
read more 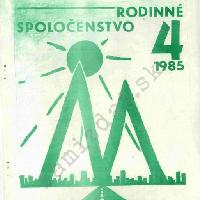 Rodinné spoločenstvo 4/1985
Samizdat Family Community was published between 1985-1989. Every year had different thematic focus: 1. year (1985) - Family in the light of love (masterpiece), 2. year (1986) - Family and Christ´s peace, 3. year (1987) - Community of life, 4. year (1988) - Unity, 5. year (1989) - Freedom. As can be seen, articles in every issue focused on family and had theological or philosphical topic. Every issue then had regular sections: From family life, Lawyer helps, Psychologist among us, History of the Church, Catechesis, Current issues of the Church and society, Personalities.
Fourth issue in 1985 focused on family and school. On 44 pages authors wrote about the role of religion in the profession of teacher, and what it means for young students as well. Every issue dealt with important persona in Slovak religious life, in this case it was Ján Hollý, 1785-1849, first greater Slovak poet to write exclusively in the newly standardized literary Slovak language.
read more
41 - 45
«« previous page 1 ... 1 2 3 4 5 6 7 8 9 10 11 next page »»