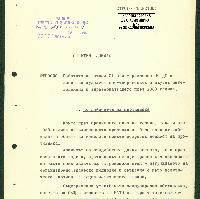 Summary Report about "Work of Department 01 at Division 06, State Security, with respect to the artistic and scientific intelligentsia and healthcare in 1980", Sofia, 23 January 1981.

The report summarizes the work of the State Security among the intelligentsia (in arts, the sciences, and the medical profession) in 1980. It states that, as before, intellectual were a prime target of the subversive efforts by enemy forces from abroad. The report highlights the difficulties in the casework of agents. Yet some of the observations succeeded in "infecting their circles" because they had been conducted over long periods. The report, thus, is a good illustration of the concrete work of the state security among the intelligentsia and of its attempts to prevent acts of cultural opposition. 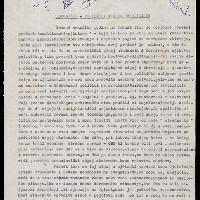 Report for the Ideological Commission's session "About Some Problems of the University's Ideological Work," 1957

This is a document that analyses the ideological activity of the League of Communists (LC) at the University (in Zagreb) and is essential for understanding the way in which LC, through the Ideological Commission, directed the ideological activity in the desired direction in higher education. The "correct" ideological attitude was expected from both students and professors, so the issue of staff in the faculties was of great importance for the political guidance of students. The document criticizes political apathy and a lack of interest by professors and students and seeks to strengthen 'Marxist education" and ideological work, the suppression of religious and "enemy" propaganda opposing scientific (meaning Marxist) views of the world, attracting students providing information on current events and encouraging culture and entertainment. It also proposes a program of ideological work for the entire duration of schooling for students, as well as work with members of teaching organizations.

By 1995, the document was, along with the other records of socio-political organisations, a part of the Archive of the Institute of History of the Labour Movement of Croatia/Institute of Contemporary History. That year, in July, it was handed over to the Croatian State Archives (CSA), where it is kept today. The documents are accessible for use without any restrictions. 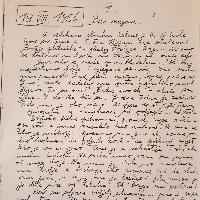 Report from the Chronicle of the Parish of Staševica, 1956. Manuscript

This record is from the Chronicle of the parish of Stasevica dated August 19, 1956, when Franić went on a pastoral visit to parishes in the area around the Neretva River, more precisely in the small village Staševica. Local communists attempted to prevent the arrival of Archbishop Franić in their parish through their Party organizations by physically stopping him on the road to the village, which he was visiting to share the sacrament of the confirmation to young people. The event testified to the total effort to de-Christianize society by the regime at the time. In that sense, Franić's diary is a genuine source of testimony about similar processes throughout his archdiocese. 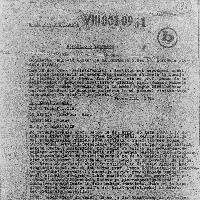 UDB-a captain France Malešič recorded the information obtained by an UDB collaborator with the code name Murovič Agata. At the meeting held on December 5, 1950, the collaborator reported about Maks Samec’s contacts with foreign experts, his health condition and the situation at the institute as well. This was a regular meeting between Malešič and his subordinate that was part of a broad surveillance scheme by the Slovenian branch of secret political police (UDB-a). 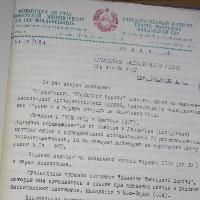 Report of the MSSR KGB on Radio Free Europe/Radio Liberty, 1972 (in Russian)

This document is an internal informative note addressed by the Deputy Chairman of the Moldavian KGB, F. Krulitskii, to the Head of the Enquiry Section of the KGB, A. V. Kulikov, and dated 26 May 1972. This item was produced in the context of the intentions expressed by the members of the Usatiuc–Ghimpu–Graur group to send a number of the documents produced by the organisation to the RFE/RL headquarters in Munich. The radio station is labelled as “one of the imperialist propaganda tools” aimed at the USSR and the “socialist camp.” The note analyses the organisational structure of RFE/RL, and emphasises that its employees “originate from various East European countries ([being] renegades, defectors, repatriated persons, traitors to the Motherland etc.”). The document states that the bulk of the RFE/RL annual budget (approx. 20 million US$) is provided by “CIA subsidies.” It is clear that the Soviet secret services were alarmed by the impact of RFE/RL broadcasts on the population of the USSR and the satellite states, while the radio station’s “subversive activities” were taken rather seriously. Describing the content of the broadcasts and the operational procedures, the KGB official notes that “during the last five years” (i.e. since 1967) RFE has intensified its activities, aiming to ‘subvert the unity, cohesion, and friendship between the peoples of the USSR and those of the socialist countries, foment nationalism, incite tendencies towards emigration, and spread anti-Soviet hysteria.” Specifically, the document asserts that during 1968–1971, RFE/RL broadcasts were paying increasing attention to the “Bessarabian question,” mentioning Romania’s “purported claims to the territory of Soviet Moldavia and the rebirth of nationalist tendencies within the [Moldavian] republic.” These trends provoked the apprehension of KGB officials, which partly explains the harsh sentences meted out to the Usatiuc–Ghimpu–Graur group and the repression against “local nationalism” that intensified throughout the USSR during the early 1970s. The document also points towards the sensitivity of Soviet officials concerning the international context and the USSR’s image abroad.