The agent who went by the cover name “Tamás Fehér” submitted a report about his meetings and talks with István Malgot, during which he attempted to learn about Malgot’s political views. He wrote about Malgot’s ’minimal and maximal political program in 1976. According to Malgot’s maximal program, ideally technocrat scientists, artists, and officials would govern the socialist state. The role of the family would decrease, and instead of families, communes would be created based on love and work. The commune would be a form of existence not only for the free artist but also for the other workers, and it would constitute a reform to tradition practices of child rearing. The minimal program involved the group’s activity, which consisted not only of artistic work but also of a struggle against manipulation and for democracy. The political police judged István Malgot’s political views as antisocial.

Anonymus. Dixi at the terrace of Restaurant Kárpátia, 1969. Photo

János Gémes (“Dixi”), the poet. Here he is in live speech, constantly provoking situations around him, like it is depicted in the photo, on the terrace of the Kárpátia restaurant, most probably in 1969. Dixi was a well-known, ubiquitous persona of the Budapest nightlife for decades.

He delivered endless monologues, orated in an associative manner, creating connections between the beginning and the end of a sentence with word play, twirling a few times the texture. He was a baffling personality, often grandiose, many times provocative, sometimes aggressive. He saw through people and never cared about the consequences.

The author of the photo is unknown. It is probably cut out from a larger photograph, as the edge is jagged. The most interesting feature of the photograph is that someone pegged out the eye of the protagonist with a needle. According to Zuzu this gesture is feminine.

Gábor Bódy introduced Dixi to Zuzu in 1971. At that time Dixi lived temporarily across the street from Zuzu at a guy’s apartment who was in the business of tailoring blue jeans—a hot, rare commodity at that time. He was a habitué at the Kárpátia, and people favored his company. He usually sat on the terrace, close to the entrance, from where it was possible to look into the restaurant as well as onto the street. He was older than them (they were still in high school, Bódy a university student).

Many students, artists, writers, poets, and musicians were hanging out at Kárpátia in those times, practically forming a regular audience. Zuzu, together with his friend Gomba (Erzsébet Gombás, one of the main characters of the film The Third by Gábor Bódy), went there often after school. This photo has preserved the familiar setting.

The figure of Dixi (1943–2002) is preserved in some photos and stories, appearances in six feature films, and a few videos and music recordings. Together with Zuzu they impersonated the characters Antoine and Désiré on the record cover of Tamás Cseh. He also provided inspiration for Géza Bereményi as one of the main protagonists of the novel Baby Vadnai.
read more 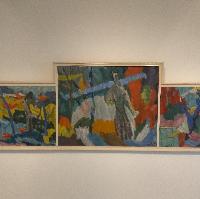 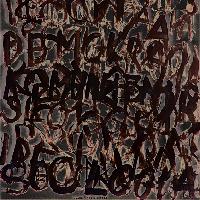 Anti-Picture
Julius Koller (1939-2007) expressed his views on the world more through text, photography, or installations than through pictures. With his anti-pictures and anti-happenings, he responded to artistic tendencies of the time. He used mostly punctuation marks, and especially question marks. This painting is part of a large series of works that originated in the fateful year of 1968.
read more 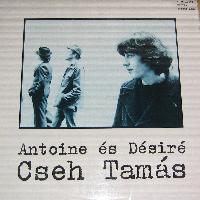 Antoine and Désiré can be considered a concept album. Released in 1978, it was Cseh’s second album. The protagonists mentioned in the title appear on the sleeve, thanks to the photo series by János Vető. They are impersonated by two people who were well known in underground circles of the time: Dixi, the poet and Zuzu, the painter. Two (fictional) biographies are also included.

As the author of the lyrics, Géza Bereményi, notes in his account, Dixi and Zuzu only lent their faces to the cover photos. The biographies reveal two typical life stories from the 1970s, one person who earns reasonably well and another who is less successful in career, nonetheless they remain friends, in spite of their different fates. According to the authorial account, they were inspired by archetype of the white and the red clown, so all the songs on the album can be considered parts of a series of clown pranks. The red clown is Désiré: the saunterer, an awkward kid; the white is Antoine: the successful adult.

In some songs, the voice of Desiré can be heard, in others a narrator tells the story, giving the singer a chance to identify with the character, but also to exit the role. The play with the alternation of identification and distancing is a returning element in their songs. The lyrics balance between the possibilities of speaking out and concealment, and partly expressed sentences and unnamed circumstances are frequent, and this accurately portrays the lives and prospectives of the protagonists. The songs are strongly atmospheric beyond the stories, and they give a precise account on the era through the sentiments they evoke.
read more
36 - 40
«« previous page 1 ... 1 2 3 4 5 6 7 8 9 10 11 next page »»