Before the first demonstration held by the organization in May, 1976, the idea of an advertisement, which was originally intended to be very short, was changed when the members succeeded in contacting Csaba Bázsa, who was working at the famous advertising agency Ogilvy & Mather. Together with him, they wrote a response to a propaganda article praising the Ceaușescu regime in the New York Times, which was then released by the Times. This propagandistic response, which was written by a Romanian Fulbright Fellow, infuriated the young people so much that they decided to write a more serious article in which they would announce the demonstration. In this framework, Csaba Bázsa took the risk of committing himself professional to the promotion, which was worth about $12,000. As this fact was disclosed at the demonstration, the campaign was successful. In other words, after the demonstration, a much larger amount was gathered than the rate which had to be paid to the agency and the paper. In addition to encouraging people to participate in the demonstration in front of the Romanian United Nations Mission, the article discussed the provisions that led to discrimination against minorities in Romania (scarce opportunities in language education and in language usage, falsification of historical data and statistics, confiscation of cultural archives, inability to make contact with relatives, and the fragmentation of minority communities). Then the article provided information concerning the obligations regarding the human rights as laid down in international law and in the U.S. constitution, on which the Romanian government infringed. The article ended by calling on the U.S to take a stand in support of human rights. It appealed to Congress to withdraw Romania’s Most-Favored-Nation Status in order to exert pressure on Romania to improve its treatment of minorities. In addition to raising awareness in the United States, the article called for donations of money and other forms of support. One of the reasons for the success of the campaign was probably that the advertising professional with whom the organization worked pulled out all the mention in the preliminary draft, which was written Bulcsú Veress, Jenő Brogyanyi, László Hámos, and his wife, of “Transylvania,” replacing it instead with Romania. In addition, it listed important violations of human rights not only with reference to the Hungarian communities, but with reference to all minorities in Romania.

The work files (score: ÁBTL 3. 1. 2. M–37304. “Mátrai”) contain the reports which were submitted by agent István Konkoly (code name “Mátrai”), who was a Catholic priest and later served as Bishop of Szombathely (1987–2006). Konkoly became an informer in 1959, not by principled conviction but under pressure from the state. He gave information to his case officers. In the 267-page dossier, there are no pieces of information which members of the state authority could not have gotten from other agents. One-third of the dossier is about the fact that “Mátrai” did not go to the compulsory meetings, the second third is about the fact that Konkoly did not give any reports, and the last third is about well-known, public information on members of the clergy.

In July 1983, Lantos submitted a long report to the secret police entitled “Experiences, Facts and Tendencies.” In this report, Lantos analyzed the political processes that were taking place, the behavior of the dissent students and the oppositional, anti-régime ideas circulating at the Karl Marx University of Economic Sciences (Marx Károly Közgazdaságtudományi Egyetem, or MKKE). He concluded that the intelligentsia was in crisis. According to Lantos, the reasons behind this were the decline of economic and political-ideological life and the lack of proper political education at the university. 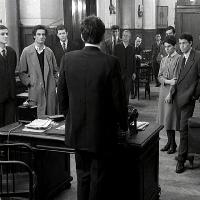 Made as part of the commemoration of the 50th anniversary of the Hungarian Soviet Republic, which emerged following the collapse of the Austrian-Hungarian Monarchy in 1919, the film offers a complex overview of revolutionary practice and the psychology of terror.

Dezső Magyar and Gábor Bódy, the director and the writer created a multi-layered narrative by using diverse literary sources, actual news footage, and references to current events. The main source of inspiration was Ervin Sinkó’s novel Optimists and the memoirs of József Lengyel and the wife of Tibor Szamuely. Georg Lukacs’s account on the subject was also used for references in some cases, as well as quotations from the writings of Mao and Che Guevara.

The film presents a general model of revolution through talking heads reflecting on their own interpretations and ideas. Though the story is based on actual events, the characters are all fictional. The protagonists, however, in addition to being professional actors, were members of radical intellectual and neoavantgarde circles. They pursued intense theoretical debates on the possibilities of revolutionary action, the dilemma of violence, the criticism of new bureaucracy, and the essence of working class culture.

In part as a consequence of the experiences of the Prague Spring and student movements in the West, the terms of the discussions were changed. The 68er radicals dropped Marxist-Leninist concepts and debated the meaning of leftist politics, the future, and the potentials of revolution and social autonomy. They developed an allegorical reading of the 1919 Hungarian Soviet Republic, which provided a pretext for the filmmakers to discuss 1968. Due to its subversive approach, the film was banned for decades.

Ako kvapôčka putovala
How a droplet traveled is a children's fairy tale about drops that create a sea. Drops symbolize the role of Christians in the world. The message of Christian religion was incompatible with the ideology of atheism. The book was rewritten on the typewriter and distributed among children and youth.
read more
16 - 20
«« previous page 1 2 3 4 5 6 7 8 9 10 ... 10 11 next page »»