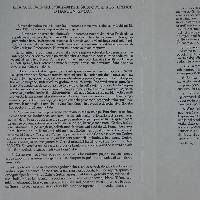 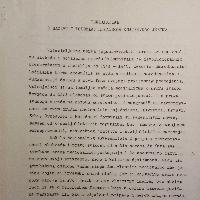 Declaration on the Name and Status of the Croatian Literary Language, 1967. Typescript

The Declaration on the Name and Status of the Croatian Literary Language was proclaimed by Croatian linguists published in the weekly Telegram on March 17, 1967, with the signatures of eighteen Croatian scholarly and cultural institutions. Croatian linguists and writers gathered around Matica hrvatska and the Association of Writers of Croatia were dissatisfied with published dictionaries and orthographies in which the language, according to the Novi Sad Agreement (1954), was called Serbo-Croatian. In late 1966 and early 1967, they had decided to write an amendment to the new Constitution which was being prepared in the late 1960s. They secretly prepared a text about the name and status of the language that was officially used in the Socialist Republic of Croatia (SRH) as part of the then Socialist Federal Republic of Yugoslavia (SFRY). The text of the Declaration was drafted in Matica hrvatska's premises by a group of academics, literary and cultural workers (Miroslav Brandt, Dalibor Brozović, Radoslav Katičić, Tomislav Ladan, Slavko Mihalić, Slavko Pavešić, Vlatko Pavletić). The Steering Committee of Matica hrvatska approved the content of the Declaration on March 13, 1967, and sent it to other Croatian cultural and academic institutions. In the next few days, the Declaration was signed by a total of eighteen Croatian academic and cultural institutions which directly dealt with the Croatian language, and by a significant number of prominent intellectuals.

The publication of the Declaration was not only a cultural but also a political affair. It had additional weight because of Miroslav Krleža, probably the most prominent left-wing intellectual not only in Croatia but all of Yugoslavia, was one of the intellectuals who signed the document. Despite the fact that the writers of the Declaration were cautious in attempting to avoid any boundaries set by the League of Communists (they used the usual communist phraseology and the style of "self-managing socialism" and the Yugoslav slogan of "fraternity and unity"), the publication of the Declaration triggered strong political reactions and set the repressive apparatus in motion. The Croatian language was a litmus test through which the overall economic, political and cultural subordination of Croatia within Yugoslavia was revealed (Kovačec 2017), and the appearance of the Declaration is considered the practical beginning of the Croatian national movement – the Croatian Spring.

The Matica hrvatska Collection at the Croatian State Archives contains the original document of the Declaration with accompanying materials (the manuscript of the Declaration, multiple typescript versions with and without signatures and stamps, Dalibor Brozović's telegrams, letters of the signatory institutions of the Declaration that give their support to its contents). 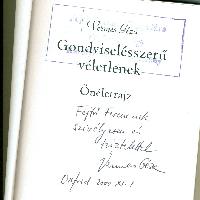 Dedicated book by Géza Vermes to Ferenc Fejtő, 2000.
Ferenc Fejtő wrote several books about the history of Jews and Judaism. He contacted many religious historians, including Géza Vermes, who was born in Hungary and worked in Great Britain. In 2000, Vermes dedicated his autobiography, Gondviselésszerű Véletlenek (Providential Coincidences), to Fejtő in Oxford. This is one of the many dedicated books in the Ferenc Fejtő Library at Fehérvárcsurgó.
read more

Deim, Pál. Cardboard relief, 1981. Cardboard
This work is a model of a large-scale wooden relief made into the representative space of Hotel Sport, Budapest, realized in 1982. The hotel was rebuilt after the political transition of 1989 and the relief was demolished and disappeared. This cardboard relief and some photos preserved in the archive are the only documents about the original work.
read more

Demonstration of the people involved in the culture community
The German Historical Museum in Berlin acquired a series of photos capturing the demonstrations of Autumn 1989 in Berlin. Among these Nagel documented the protests against the election of Egon Krenz as a follower to Erich Honecker, the massive demonstrations at Alexanderplatz on November 4th 1989, as well as the protests against discrimination of foreigners organised by the 'Neues Forum' among others.

Nagel often depicted his images within a neutral context showing fewer people. Only in his photos documenting protests during the autumn of 1989 people became his main focus. During the November demonstrations in Berlin, Jürgen Nagel was actively present documenting also the protests of various actors involved in the creative scenes asking for democratic elections in the GDR and no violence. Himself was actively contributing to the demonstrations organised by the 'Neues Forum' and brought his contribution to drafting the protest resolution of the Union of Artists.
This image was taken during the demonstration of the people involved in creative industries in the GDR on November 11th of 1989.
read more
16 - 20
«« previous page 1 2 3 4 5 6 7 8 9 next page »»