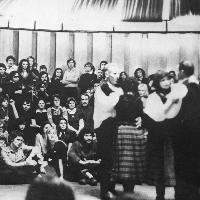 Dance House in the Metropolitan Cultural House, 1974. Photo
This photo shows professional dancers introducing steps of traditional Hungarian dances to young amateur participants. At that time, the dance-house movement was very popular and thousands of young people took an interest in this form of leisure. The photo was originally published in the 1981 book Nomadic Generation.
read more 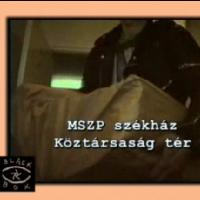 The 34-minute long documentary film ‘Danube-gate’ by Black Box is an event tracking documentation of the secret spying scandal that exploded in Hungary in January 1990. Police Major József Végvári, an active member of the infamous III/3 secret department, in late 1989 called on the cameraman of Black Box to help to reveal the fact that months before the free elections, the ex-communist ruling party, renamed MSZP, was still surveilling the activists of the democratic opposition, just as it did for several prior decades.

In one of her interviews, Márta Elbert recalled her memories about the discovery and its effects: “In January, with the Danube-gate scandal exploding because of our recordings, we practically managed to remove the Interior Minister from his position. In our days, the activities of Department III/3 of the Hungarian secret police were well known. However, at that time no one had any idea about its staff, and how it worked in secret operations; it was our film ‘Danube-gate’ that shed light on these aspects for the first time, informing a wider public. It is no wonder then that these revelatory shots immediately made Black Box known and esteemed not only in Hungary, but also abroad, as the world’s major TV companies tried to come in contact with us. […] Nowadays, in the media, spectacular expositions follow each other at such speed that they often extinguish each other’s effect. But at that time it was different. And just a few months before the first free elections, it was really shocking for most of the public to be informed that the secret police went on surveilling the democratic opposition in much the same way as it had been doing before, although the National Roundtable Negotiations of 1989 concluded in an agreement between the ruling communist party and the opposition to stop all those antidemocratic secret operations. In fact, the Danube-gate scandal set off by our film was the very first case that publicly identified by face and name those hidden and high-ranking apparatchiks who were in charge of operating the secret spying and reporting system in Hungary.”
read more 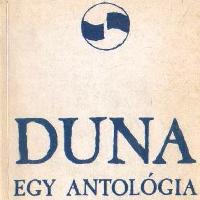 Danube. An Anthology, 1988. Book
In 1988, at the initiative of Anna Perczel, the Danube Circle published the book Danube – An Anthology, which originally was a samizdat. Perczel knew many members of the Hungarian literary world, and she asked them to collaborate. The authors (poets, writers, environmentalists, scientists, engineers, etc.) wrote articles in opposition to the planned river dam system at Nagymaros. Authors from all segments of Hungarian society participated. Miklós Mészöly, Gáspár Nagy, György Petri, Sándor Csoóri, and Miklós Duray were among the contributors.
read more 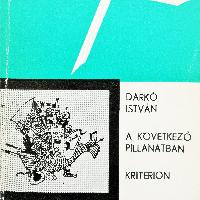 The philosopher Péter Egyed and the poet Géza Szőcs convinced István Darkó to write and to publish his writings in a separate volume. But Darkó's writings did not conform to a regular genre. In his book it is also disturbing that one or two pieces are similar to short stories or narrations but yet are not. In literary terms, this is such a text écriture that it is patterned with some established genres. In those days, text and text literature should have lived its time in Romania too, as in the whole of Europe, but this was an unfortunate environment in which, if one did not adapt to the literary standards, one’s writings were not published. Darkó did not adapt to the current literary standards, because this was not an aim for him as an actor. He wrote down what he wanted, in the way he felt and saw. His writings were often the written modification of a sounding material. In certain cases he may have heard what happened before he could note it down. The writing was born from the sound, and one genre gave him the possibility of another one, but Darkó remained an actor in each genre, as both his tape plays and his writings are performable. In his "city" live "distilled people", who behave amazingly, but with their thoughts, their obsessions they carry the burden of every person. Darkó "plagiarises" many times from his earlier writings: he copies from the programmes of Cat Radio, from the articles of his paper Bendzin, and sometimes from the writings of “Henrik Szénégető” or “Fruléz.” The characters of his fictive world organise their own lives, creating a fictive reality, with a certain deadly content, from which may be understood the true reality, which is thoroughly hidden because of the normality of cowardice. The singularity of his writings lies in the fact that they create a structural fiction with multiple content and layers, which has a kind of hermeneutical relation to the current reality. Darkó never forgets those who are writing the counter story, the cultural history of nastiness, against the forces creating the world order, those who set all kind of traps for the heedless part of humanity, who harass, threaten and chase them. The people of darkness and nastiness cannot be helped to power. Darkó's writings are all allusions to such a utopia, in which the atmosphere and the hopelessness of the depressed existences, the Nothing continuously speaks.

The Forrás (Source) series of the Kriterion Publishing House had an official committee, an editorial council. The usual procedure was to ask for a reference either from them or from other famous writers. Two references had to support a Forrás volume and according to custom the volume editor could ask for references from whoever he wanted. He obviously would not ask for references from anyone he knew would have an unfavorable opinion of the manuscript. Thus Egyed turned to the poet and writer László Csíki and Andor Bajor, because he knew that they understood the message of the author. The two references were obtained, the volume was published, and then came the official standpoint of the editorial council members according to which Egyed had gone beyond the rules and that he had exaggerated or rushed with this project. This was discussed at the consultation organised by Utunk (Our way), the Cluj-based literary, artistic and critical weekly of the Hungarians of Romania. The participants included Zsófia Balla and Géza Szőcs, representing the third Forrás generation, who said that the manuscript had to be published at all means, because it was important, it expressed something that came from their life experiences. They found themselves in Darkó's writing, rather than in other writings that had been published earlier in the Forrás series, boring, grayed, dusty, forgettable. Péter Egyed interprets the expression of cultural resistance, which appeared also in the Romanian press and constitutes a specific genre, in its content as being about an another culture. He claims this because as an editor at Kriterion Publishing House he knew exactly the censorship instructions. He knew very well the sort of cultural products that the Romanian Communist Party expected from authors. He knew the key terms and he corresponded on various matters with the ideological secretaries, who always wrote down what the poem, prose etc. on had to contain. If these were not contained in it, an another culture was obviously born, not one that accorded with the official system of expectations. But the official expectations could not work, because no one was willing to write like a Party official in the 1980s. Specifically, in a situation recalling Cat Radio, in which writing is about nothing other than the fact that everybody is chased and the chasers are also being chased round and round, this could not really be a content corresponding to any official ideological norm. According to Egyed the "opposition" says openly: "not this." Darkó's writing does not go directly against the system, but it says that there is an "Other", which expresses you and which has nothing to do with this system – which says that what you live in is not like that, and pays attention to the fact that you are being chased, that you are near to death. These are the feelings that come over from his text.

The volume was published in a print run of 5,000 copies, an astonishing number from today’s perspective, and created quite a considerable literary subculture. The interpretation of Darkó's writings appeared periodically later in the works of the literary critic Attila Mózes, the man of letters Levente Gyulai, the artistic writer Gábor Martos and the literary historian and poet Ágnes Kata Miklós. 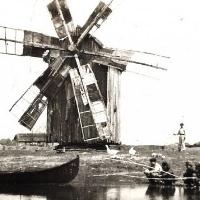 Data Sheets on Windmills from Enisala, Dunavăţ, Frecăţei and Mahmudia in Dobrogea, in Romanian. Research: 1965-1977. File

From 1964 until the end of the 1970s, Hedwig Ulrike Ruşdea, a museologist at the Museum of Folk Technics, conducted multiple pieces of field research on the technology of windmills and on their history and role within rural communities in the region of Dobrogea. In this file, she compiled specification sheets for the researched windmills, notes on the history of artefacts, interviews with former owners, who had been labelled as kulaks (chiaburi in Romanian) by the communist regime because of their owning a windmill, observations on the economic and social role of windmills, analyses of their numeric evolution, photographs of windmills rescued from the villages of Enisala, Dunavăţ, Frecăţei, and Mahmudia in Dobrogea, and reports on the acquisition of these windmills. The information included in this file persuaded the leadership of the Museum to rescue and reassemble the four mills at its open-air exhibition located on the outskirts of Sibiu. The various data gathered in the file are also a valuable historical source on the history of the region's cultural heritage and on the impact on this heritage of the economic and social modernisation policies implemented by the communist regime.