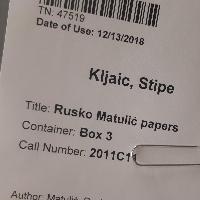 The bequest of Rusko Matulić, an American engineer and writer of Yugoslav origin, is held in the Hoover Institution at Stanford University. The collection largely encompasses Matulić's activities as a political émigré in the United States of America, when he mainly dealt with the publication of the bi-monthly bulletin of the Committee Aid to Democratic Dissidents in Yugoslavia (CADDY). The bulletin and organization acted as a part of the Democratic International, established in New York in 1979. Mihajlo Mihajlov, one of the most prominent Yugoslav dissidents, was a member and the main initiator of launching the CADDY organization and its bulletin. Rusko Matulić was Mihajlov's main collaborator in the overall CADDY project.