There were changes in the history of Hungarian scholarship on music in the 1960s. Researchers started to analyze the personal and collective dimension of the reception and to think about how the historical past could be interpreted through popular music.

The two symbolic dates were 1962 and 1966. In 1962, József Ujfalussy’s book A valóság zenei képe [The Musical Image of Reality] was published, in which he examines the texture of the music and the places and ways in which it was presented.
In 1966, János Maróthy’s major work, Zene és polgár, zene és proletár [Music and Bourgeois, Music and Proletarian], was published. In his book, he elaborated on the different types of music in the twentieth century.
He studied the relationships between the bourgeois worldview and bourgeois music, as well as connections between the folk song and bourgeois music forms and historical types of the folk song. In his book, Maróthy dedicated a section to the relationships between folk and mass music, emphasizing the music of the workers and trying to examine the effects of folk music on workers’ culture. Maróthy turned away from the main directions of the local discussions on jazz. He was interested in the social roots of this type of music, its relationships to folk music, and its labor movement backgrounds. This book is one of Maróthy’s publications which had effects on later research methods.
read more
Masterpiece of Special Collection (NAMU): Bohomazov, Oleksandr, "Sawyers"

Oleskandr Bohomazov's “Sawyers” refers to a triptych the artist worked in 1926-1929, but did not complete. As Elena Kashuba-Volvach notes in her essay for the catalogue Alexander Bogomazov, 1880-1930, the most famous piece “Sharpening the Saws” is held at the National Museum of Ukrainian Art in Kyiv, along with “Sawyers at Work.” The second painting in the cycle is not displayed publicly because of significant paint damage. The third piece “Rolling the Logs” was never completed, although Bohomazov did leave behind a number of pencil drawings and compositional sketches that indicate how the final painting and the project as a whole were meant to appear when finished.

Bohomazov worked on these paintings from 1926 to 1929, when “political considerations were becoming the main criteria for judging art in Ukraine and throughout the USSR,” as Kashuba-Volvach notes. This observation makes it even more remarkable that Bohomazov’s work on this triptych marked his return to painting. He took a lengthy hiatus following the October Revolution and Civil War, prompted in part by his ongoing battle with tuberculosis. During this time, Bohomazov concentrated mostly on teaching at the Kyiv Art Institute and his research into the foundations of painting. These endeavors ultimately dovetailed, leading Bohomazov to draft a teaching manual Experiencing Elements of Art. The desire to test the theories outlined therein inspired Bohomazov to once again pick up the brush.

Socialist Realism would not become official aesthetic dogma until 1934, but one can see how Bohomazov’s choice of subject and setting could come across as “formalist” to Soviet censors. As Simon Hewitt argues in his essay for the same catalogue, Bohomazov's triptych portrays labor in the countryside that features neither peasants nor city workers. Though his sawyers are conscientious and hard-working, they “work in a rhythmic tandem unchanged for centuries.” This work went against the emergent grain of a Soviet aesthetic that showcased cheerful peasants, industrious factory workers, electrification and industrialization.  The “silent subversiveness” of the work is reinforced by its “abrasive color-scheme.” The futurists and the avant-garde “thrived on bright palettes,” but the “orangey-pink contrasts” used by Bohomazov in this work also made him a pioneer of color.

The permanent exhibition at the National Art Museum includes Aleksandra Ekster’s Cubo-Futurist landscape “Bridge at Sèvres.” It was painted during a dynamic time in Ekster’s life, when she was actively collaborating with Picasso, Braque, Guillaume Apollinaire, Max Jacob and with the Italian Futurists Filippo Marinetti, Giovanni Papini and Ardengo Soffici (with whom she shared a studio in 1914). In 1952, this painting was slated for destruction as too formalist and unrealistic, but survived partly because curators designated this a work by an unknown artist. 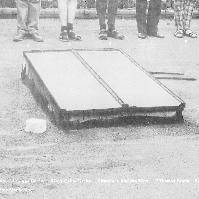 Material about "Hammer-Rehwü", 1982
In a cooperation with other artists, the song theatre group “Karl’s Enkel” performed their programme “Hammer-Rehwü” for the first time in 1982 in Berlin. Apart from countless buffooneries and poetry, it also contained “jaunty songs about the present” as Jürgen Schebera described it in his contemporary critique (http://www.hdjt.org/hammerrehwue/). Behind the scenes, there had been a back-and-forth between cultural officials because the performance was seen as disparaging the “values of socialism”. The Archive for Song and Social Movements has collected countless materials about it, including video recordings of the performance.
read more
Material for the Secretariat meeting, Pezo, Vladimir. Some issues on criminality and antisocialist phenomena among youth, 27 October 1960

The document is an analysis of juvenile delinquency and the so-called anti-socialist occurrences among the youth in the area of Makarska, where the latter are notable as opposing activities. The document cites the oppositional activities of young people: the establishment of nationalist Croatian organizations in schools (e.g., "TIHO" - Secret Organization of the Croatian Intelligentsia, in which Ivan Gabelica was active), an expression of the opinion on the lack of freedom in the state by Bruno Bušić, the flight of the youths abroad and the catechization of the youth.