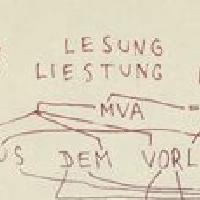 Graphics for an invitation card
Privately organized apartment, studio or courtyard readings offered many authors belonging to the independent literary scene in the GDR the only opportunity to appear and present their texts publicly or in larger groups, as well as to receive feedback from peers. Frequently, the invitations to such events were highly detailed and artistically decorated. Several dozen such invitations, including those to readings of Peter Brasch or Christa Moog are part of the Jan-Faktor-Archive. The invitation shown here is to a reading of Jan Faktor and Werner Theuer in the poetry studio of Wilfriede and Eckehard Maaß, one of the first and most important transregional ‘reading rooms’ of the alternative milieu of East Berlin.
read more 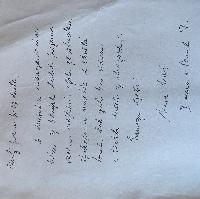 Gratulation to Václav Havel from Ivana and Pavel Tigrid, 1998.

Congratulations to President Vaclav Havel from Ivana and Pavel Tigrid, sent to him by fax on 5 October 1998, at 2:52pm. Pavel Tigrid and Václav Havel held a long-standing friendship that began in the spring of 1968 when Havel returned from the United States. They scheduled a short meeting in the transit area at Orly Airport in Paris, which then stretched into a whole week that Havel spent at the Tigrid House in Héricy near Paris. In this case, the encounter happened to be when pilots and air dispatchers went on strike at the airport. Tigrid even met Havel and his wife Olga briefly in 1969 when they visited him on his trip to France. After that, Václav Havel was deprived of his passport for a long time, about twenty years, leaving only telephone and written contact between Tigrid and Havel. And it was Havel, who invited Pavel Tigrid to Prague in December 1989 for his inauguration. Tigrid returned to his homeland after over forty years away to help build a democratic state.

Skirt, in Sorin Costina’s private collection, is a painting in oil on canvas. It is unsigned and undated, but is one of the well-known works of the artist Ion Grigorescu, at present the most well-known Romanian artist internationally. The painting is 32 cm in width and 58 cm in height. It was acquired on 20 April 1982 at an exhibition in Căminul Artei (Home of Art), the Union of Visual Artists gallery in Bucharest, at a price of 1,000 lei. At the time of its acquisition it was unframed. Its present frame was made from a rod of oak, at the suggestion of another contemporary artist of considerable fame in Romania, Paul Gherasim. It was brought to the collectors home by Ion Grigorescu himself, who stopped for a time in Brad in June 1982 on his way to a monastery in the region. Skirt may placed in the context of the artist’s visual experiments with the human body, a taboo theme in the communist period. It has been displayed in a number of thematic or solo exhibitions, including various Ion Grigorescu retrospectives, the most recent of which was hosted by the Museum of the Criş Land in Oradea in 2018. 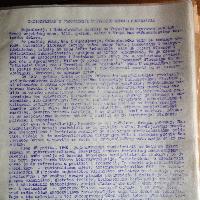 "Until the last war, Czechoslovakia, as well as Yugoslavia, was the dungeon of peoples. Slovakia, the supplier of cheap labour to the Czech bourgeoisie and landowners, the focal point for the goods of the Czech industry, was the object of the class and national exploitation, condemned to permanent poverty. It was the situation that resulted in nationalism and chauvinism the same way as it happened in pre-war Yugoslavia. Then Hitler came and 'helped' Slovakians to 'liberate themselves' from Czechs, as well as he 'helped' Croatians to 'liberate themselves' from Serbs.  In a joint struggle against fascism, the Czechoslovakian as well as the Yugoslav peoples reunited, of course, with enormous sacrifices."
read more
Grygar, Milan. Haptic drawing, 1983. Video recording
The Haptic drawing by the Czech artist Milan Grygar was first made in 1969, the event took place again in 1983 for the purpose of the recording. Milan Grygar is dressed in black and after the haptic drawing (there is no use of sight) on the white sheet of paper, Grygar destroys the result.
read more
21 - 25
«« previous page 1 2 3 4 5 6 next page »»