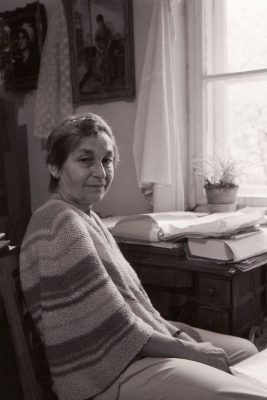 Doina Cornea kept a diary from the late 1940s up to the 2000s, which reflects the inner life of a Romanian intellectual under communism who embarked on a courageous opposition to Ceauşescu’s dictatorship.  The manuscript offers a valuable insight into the intellectual atmosphere in which Cornea’s open letters and samizdat translations were created. In 2009, the Civic Academy Foundation published those notebooks which cover the period from 1988 to 1989, when Doina Cornea intensified her oppositional activities and sent several of her famous open letters of protest, such as that opposing the demolition of Romanian villages or the “Letter of 23 August,” which synthesised her criticism of Ceauşescu’s regime. In June 2009, the book was launched at the French Cultural Institute in Bucharest. Henri Lebreton, the head of the French Cultural Institute in Bucharest, chaired the discussion and the Romanian poet Ana Blandiana presented the book to the public.