Cornea, Doina; Combes, Ariadna. Letter to those from home who did not give up thinking with their heads, in Romanian, 1982. Manuscript 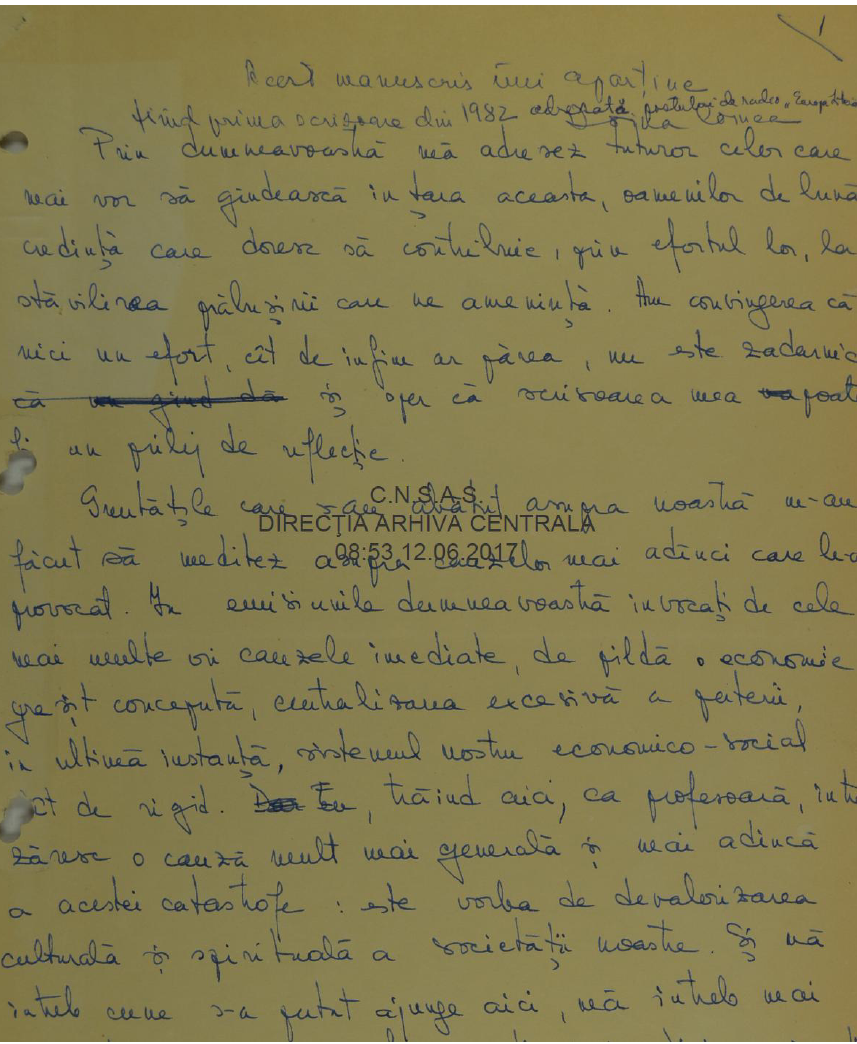 After listening in November 1987 to the news broadcast by Radio Free Europe (RFE) about the anti-communist revolt of the workers in the factories of the city of Braşov, Doina Cornea openly displayed her solidarity with the protesters. On 18 November 1987, she drafted 160 manifestos, which were spread with the help of her son Leontin Horaţiu Iuhas in several public spaces in Cluj (Cornea 2009, 194–195). Consequently, on 19 November 1987, she and her son were arrested by the Securitate after a detailed home search (Cornea 2006, 203). During home searches on 19 and 23 November 1987, the Securitate confiscated many documents from Cornea’s private dwelling, including all the drafts of her letters to RFE.

Among these documents, the Securitate confiscated the handwritten draft of the first letter she sent to RFE entitled: “Letter to those from home who have not given up thinking with their heads.” According to interviews granted by Doina Cornea, this letter was drafted by Cornea and her daughter Ariadna Combes in July 1982 (Cornea 2009, 169-170). The document was smuggled to the West and sent to RFE with the help of her daughter, who chose to remain in France in 1976 and visited her mother in July 1982 (ACNSAS, FI 000 666, vol. 2, f. 11). In August 1982, the letter was broadcast by RFE during the radio programme “Talking with RFE listeners.” It was the first letter in a series of twenty open letters sent by Doina Cornea to RFE in the period from 1982 to 1989, through which she asserted herself as one of the most prominent Romanian dissidents (Cornea 2009, 195–196). The open letters sent by Doina Cornea to RFE intensified the surveillance and repressive actions of the Securitate, which had already been monitoring her closely since 1981. Due to the fact that the strict surveillance in communist Romania did not allow the development of a samizdat and tamizdat milieu, RFE played a key role in conveying the messages of Romanian dissidents to their fellow citizens (Petrescu 2013, 277).

The letter starts with a reference to radio programmes of RFE that had been previously broadcast. During these radio programmes, journalists specialising in East European issues had dealt with the crisis that affected communist Romania during 1980s and identified political and economic factors as the immediate causes. Instead of these causes, Doina Cornea emphasises in her letter causes relating to moral and cultural values. By idealising interwar Romania, she brings into discussion the destruction of the Romanian intellectual elite during the first two decades of communist rule and the decay of the educational system. In Cornea’s opinion, this “spiritual crisis” is illustrated by the everyday “compromises” and “lies” that citizens living under a communist dictatorship have to “accept and circulate” (ACNSAS, P 000 014, vol. 2, f.1). Her argumentation in this respect is similar to that developed by Vaclav Havel’s essays and epitomised by his principle of “living in truth” (Havel 1990). Cornea argues that “the people is fed only with slogans,” which stifle all openness towards “truth, revival, and creativity” (ACNSAS, P 000 014, vol. 2, ff. 2–3). She criticises the conformism of Romanian intellectuals and state policies which limit theoretical education (especially the humanities) and promote technical education in order to fill the need for cadres in the rapidly growing heavy industry.

She concludes her text by asking for a reform in the educational system and encourages those working in this field at least to take advantage of the limited possibilities available to them to promote what she considers to be authentic cultural and moral values. According to Cornea, those working with students should not teach them “things in which they themselves do not believe” and they should “encourage the creativity of young people and not be afraid to say what they think” (ACNSAS, P 000 014, vol. 2, ff. 4–5). At the end of the letter, Doina Cornea inserted her name with the mention: “for the messengers of RFE listeners” (ACNSAS, P 000 014, vol. 2, f. 5). She did not intend to reveal her real identity to the listeners of RFE, but just to prove the authenticity of the document to the editors of the radio programme. Due to a misunderstanding, her real identity was revealed during the radio show.

In November 1987, after the draft of this document was confiscated by the Securitate, the secret police used it as an argument of accusation during Cornea’s interrogation. This focused especially on the channels used by Cornea to send the letter to RFE. Although she did not mention it during the interrogation, the Securitate suspected that her daughter Ariadna Combes had helped her in this respect. For this reason, Cornea’s daughter thereafter did not receive a permit to enter the country to visit her family until the fall of the communist regime.