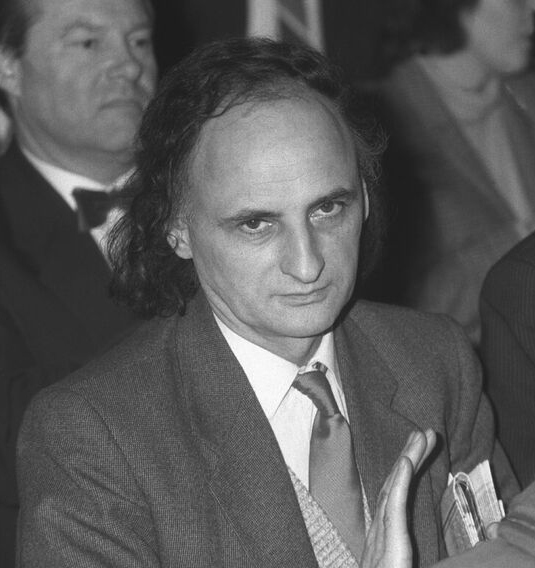 Grigore Vieru (b. 14 February 1935, Pererîta, Hotin county, then in Romania, today Briceni district, Republic of Moldova – d. 18 January 2009, Chișinău) was a Moldovan poet and writer. He is mostly known for his poems and children’s books. His poetry is characterised by vivid natural scenery, an outspoken national orientation and powerful images of motherhood. Vieru came from a relatively well-to-do peasant family. His literary debut came in 1957, with a booklet of poems for children. The following year, Vieru graduated from the Ion Creangă State Pedagogical University in Chișinău, receiving a degree in history and philology. In 1959, he became editor at the magazine Nistru, published by the MWU. From 1960 to 1963, he served as editor in chief of the Cartea Moldovenească publishing house. In 1967, Vieru's book Poezii pentru cititori de toate vârstele (Poetry for readers of all ages) (published in 1965) was awarded the Moldavian Prize for Youth Literature. The following year, his book Numele Tău (Your name) became part of the contemporary literature curriculum in Moldavian universities. This book featured several poems dedicated to prominent Romanian poets and artists (Arghezi, Blaga, Brâncuși, Labiș, and Sorescu), which was unprecedented in the literary context of the MSSR. Starting from the early 1970s, Vieru collaborated with a number of Moldavian composers, while his lyrics became rather popular in the 1980s and early 1990s. After 1965, starting with the Third Congress of the MWU, the poet began to display an increasing political sensitivity and open “pro-Romanian” tendencies. In 1970, he published a children’s book in which he inserted a poem – “Curcubeul” (The rainbow) – metaphorically referring to the three colours of the Romanian national flag. This volume was destroyed by Soviet censorship, and Vieru was accused of an “ideological diversion.” In 1973 Vieru visited Romania for the first time. He later confessed: “If somebody dreamed of getting to outer space, for my whole life I have dreamed of crossing the Prut River.” He visited Romania as part of a Soviet delegation and had a meeting with the editors of the popular Romanian journal Secolul 20 (Twentieth century), notably Dan Hăulică, Ștefan Augustin Doinaș, Ioanichie Olteanu, Geo Șerban, and Tatiana Nicolescu. In 1974 he visited Romania again, responding to the invitation of the chairman of the Romanian Writers’ Union, Zaharia Stancu, followed by another trip in 1977, during which he visited Bucharest, Constanța, Cluj, and Iași. In the late 1980s, Vieru became one of the most significant supporters of the national movement, being a founding member of the Moldovan Popular Front. He fervently advocated the introduction of the Latin script. As early as 1988, he authored the first text in the Latin script to be published in the MSSR since 1945, which appeared in the MWU weekly Literatura și Arta. He was also one of the main organisers of the Great National Assembly of 27 August 1989. He supported the new language laws voted by the Supreme Soviet of the MSSR on 31 August 1989. Vieru’s lyrics for a series of patriotic songs became a powerful tool of nationalist mobilisation in the late 1980s and early 1990s. Although he retired from active politics after 1992, he remained firm in his nationalist convictions and participated in the identity conflicts that erupted in the Republic of Moldova. Dividing his time between Moldova and Romania, Vieru remained a prominent public figure until his death. He died on 18 January 2009 as a result of a car crash. His funeral, organised two days later, gathered a crowd of over 10,000 people, and was the most massive event of this kind after Moldova’s independence. He remains unequalled in terms of the mass impact of his works, especially due to the wide dissemination of his children’s books and the popularity of his song lyrics among a significant part of the population.