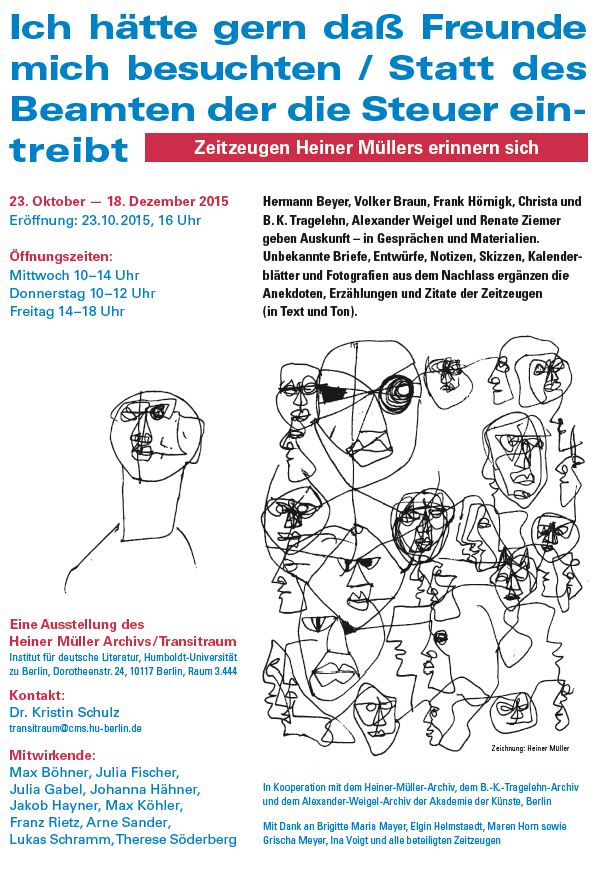 On the basis of the“Heiner-Müller-Archive / Transitraum” several exhibitions have already been realized. What is particularly remarkable, are the results of the student seminars, e.g. the exhibition: "Fürs Erste sind wir in der LPG" [For now, we are in the LPG (Agricultural Union of the GDR)], "50 Jahre Heiner Müller" "Die Umsiedlerin oder Das Leben auf dem Lande“ [The Resettlerd or Life in the Countryside]. They were shown at the Heiner-Müller-Archive from 20.10.2011 - 17.11.2011 and took place in cooperation with the foundation of the Academy of Arts (AdK). Also in cooperation with the AdK, Kristin Schulz produced an exhibition, along with the recollections of selected eye-witnesses called: “Ich hätte gern, daß Freunde mich besuchten / Statt des Beamten, der die Steuer eintreibt“[I would prefer friends come visit me / Instead of the public officer collecting taxes]. The "Transitraum" accommodated the exhibition from October 23 to December 18, 2015. In March 2016, the “Internationale Heiner-Müller-Gesellschaft” conducted a “Heiner-Müller-Festival” in The Berlin theatre "Hebbel am Ufer" (HAU). At this event, Kristin Schulz presented the “Heiner Müller-Archiv / Transitraum” under the title "Transitraum goes HAU" as an extravagant temporary exhibition,  showing Heiner Müller's relationship to his books.