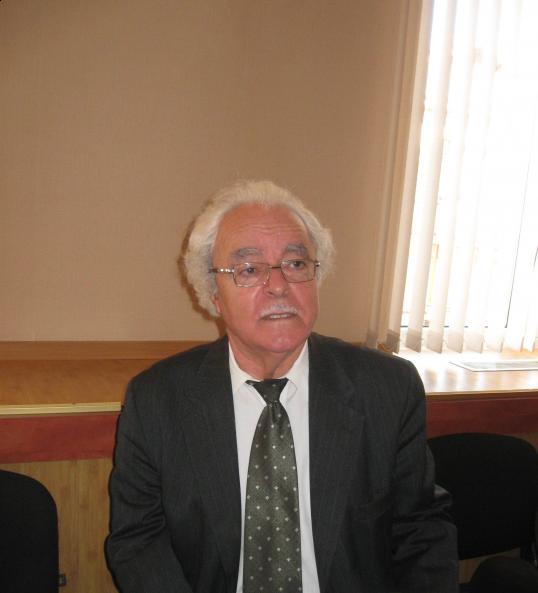 Mihai Moroşanu (born 22 November 1939, Drepcăuţi, currently Briceni District, Republic of Moldova) is one of the most famous Moldovan dissidents of the Soviet period, well-known for his staunch criticism of the regime and for his strong nationally oriented views. In 1949, he and his family (his mother, father, two sisters, a brother, and grandmother) were deported to Siberia, Kurgan Region, Russian Soviet Federative Socialist Republic. The deportation of Moroșanu’s entire family, who were labelled as “kulaks,” was part of the second massive wave of deportations, organised by the Soviet authorities in order to break peasant resistance to the process of collectivisation. The main target of the 1949 wave of forced resettlement was the “class enemy” in the countryside, i.e. the relatively prosperous and middling peasants, identified as “kulak elements.” This traumatic experience left a lasting impression on Moroșanu. In 1953, when he was only fourteen, he was forced to get a job, because his family was facing serious material problems and his parents had become ill. On 12 March 1955, he lost his right arm in the wake of a labour accident, becoming partially disabled at the age of seventeen, which entitled him to a monthly disability pension of 17 roubles and 80 kopeks. He nonetheless attended a seven-grade school in Siberia. In 1958, his family returned to Drepcăuţi and Moroșanu resumed his education. He graduated from a local secondary school in 1961, and the same year became a student at the Faculty of Engineering and Construction of the Moldavian Polytechnic Institute in Chişinău. After completing three years of study, Moroșanu was expelled at the beginning of the fourth year for organising a wreath-laying ceremony at a monument dedicated to the medieval ruler Stephen the Great. This historical figure successfully reigned over historical Moldavia for forty-seven years and thus represents one of the most prominent personalities in Romanian national history. The event took place on 11 October 1964, as Chişinău was celebrating the fortieth anniversary of the Moldavian Autonomous Soviet Socialist Republic (MASSR), which had been established on 12 October 1924 in order to substantiate the creation of a Moldavian identity among the Romanian-speaking population of the Soviet Union. It was rumoured that the monument to Stephen the Great would be moved to another, less central, location. Moroșanu thus collected signatures from students who wanted to express their opposition to the plan (he managed to collect over three thousand signatures from several educational institutions in Chișinău) and money for a floral wreath with the inscription “from the youth of Moldavia,” which he laid at the statue. As a punishment, he was suspended from the institute and forced to work at a Chişinău-based reinforced-concrete plant for two years. Only after that could he resume his studies. However, he was arrested on 28 July 1966 and sentenced to three years’ imprisonment on 2 November 1966, on the basis of Article 71 (undermining the national and racial equality of Soviet citizens) and Article 218 part 1 (hooliganism with aggravating circumstances) of the Penal Code of the Moldavian Soviet Socialist Republic (MSSR). His arrest was due to his involvement in another incident, during which he insisted on speaking Romanian to a Russian shopkeeper in a central Chișinău shop. Thus, Moroșanu was accused of “nationalism.” The irony is that his demand was in line with Soviet legislation, since the federal constitution stipulated that the Moldavians had the right to use their language as the “national” language of the republic. However, the accusation of “nationalism” entailed serious consequences in this period. Moroșanu was amnestied in 1967, on the occasion of the fiftieth anniversary of the October Revolution of 1917, but he was released only in September 1968, ten months before the end of his three-year sentence. Starting from January 1969, he was employed by a construction company in Chişinău, where he did his best to prove that he was a highly skilled specialist and thus frequently received bonuses for fulfilling the plan. Immediately after his release, on 30 September 1968, Moroșanu submitted a request to be readmitted to the Faculty of Engineering and Construction of the Polytechnic Institute. His request was denied on a technicality, but the real reason was political: as a person convicted for nationalism, he was a liability for the leadership of the MSSR. During the following year, however, Moroșanu filed a number of petitions to higher Soviet authorities, pleading his case. With the support of Construction Trust No. 13 in Chişinău, where he was working at the time, Moroşanu left for Moscow in July 1969, where he asked for an audience with the minister of higher education. As a result, the minister approved his request in August and he was readmitted as a part-time distance-learning student.

At that time, Mihai Moroşanu was well-known among Chişinău residents due to his courage in defending the Moldavians’ national rights. He did not hesitate to discuss nationally sensitive issues with the employees of the construction trust where he worked after 1968, emphasising the need for Russian-language speakers to learn Romanian. Moreover, while a student in 1963, and then again after 1968, Moroşanu openly talked about the fact that the Ismail region had historically been part of Bessarabia but had been forcibly attached by the Russians to Ukraine. For these ideas, Moroşanu was repeatedly called to the KGB headquarters, harassed, and threatened with incarceration. He avoided further convictions because he fought against the regime with the weapons that it tacitly approved of. In particular, he read carefully and knew thoroughly everything that Marx, Engels, and Lenin had written about Bessarabia, the tsarist regime in the region, and the Soviet nationalities policy. Moroșanu also attentively studied the Soviet laws that were defied in the MSSR. Regarding the issue of southern Bessarabia, he referred to a book by Artyom Lazarev, one of the most visible local dignitaries and a trusted party intellectual. The book, written in 1974, openly criticised the redrawing of the Bessarabian borders in 1940, when the northern and southern districts of this region were transferred to Ukraine, while the rest of Bessarabia was merged with the MASSR to form the new MSSR. However, the KGB and a special commission of the Institute of History of the Moldavian Academy of Sciences concluded that these ideas were dangerous and that they fomented interethnic hatred. Moroşanu’s case proves his perseverance and his constant struggle for the protection of national rights and symbols in the MSSR. His uncompromising stance earned him the respect of certain KGB officers. In the late 1980s, Moroșanu, together with a group of other descendants of former deportees, filed a lawsuit for defamation against the infamous second secretary of the Moldavian Communist Party and Moscow’s unofficial envoy, Viktor Smirnov, who had insulted the “offspring of the former kulaks” during a plenary meeting of the Central Committee on 30 May 1987. Moroșanu finally won the case in April 1990, when the Moldavian Supreme Court forced Smirnov to pay Moroșanu damages and to publicly apologise. Moroșanu also took an active part in the movement for national emancipation in the late 1980s. For example, he was one of the organisers of the famous meeting on 7 November 1989, which became the most massive anti-regime demonstration hitherto organised in the MSSR and culminated in the blocking of a column of tanks by the angry crowd. In the early 1990s, Moroșanu was a member of the Council of the Moldavian Popular Front and was directly engaged in politics. He became less visible in the public sphere in the late 1990s, but remained closely involved in public initiatives related to preserving the memory of Soviet repressive policies. He still remains a symbolic figure for his uncompromising and constant resistance to the Soviet regime.