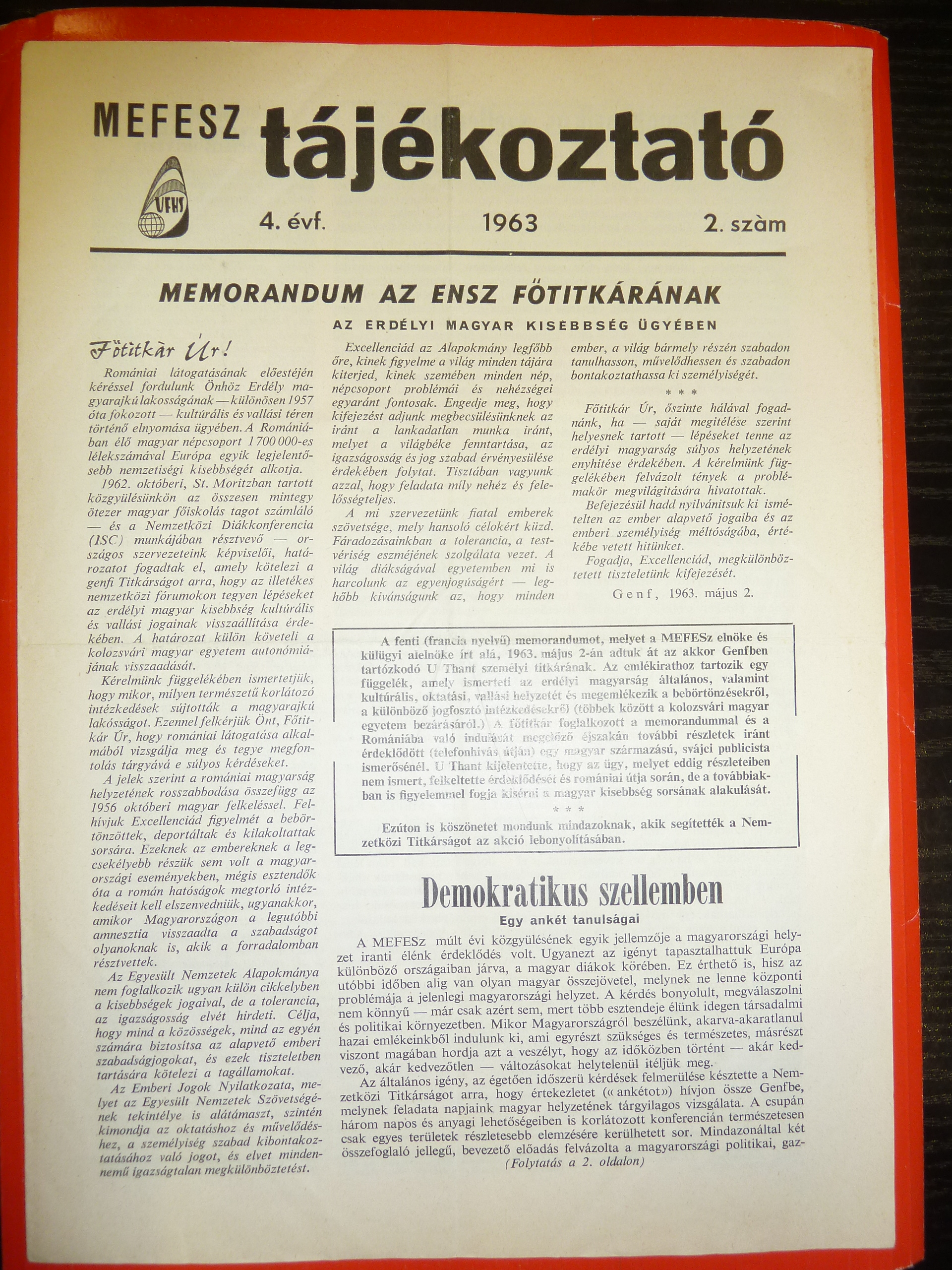 When a new issue of the Hungarian émigré students’ bulletin was published in May 1963, major political changes had taken place both in Hungary and all over the world. By the end of 1962, the “Hungarian question,” which had been a subject of debate for six years, had been taken off the agenda of the UN General Assembly. In early 1963, an amnesty was proclaimed in Hungary for most of the 1956 political prisoners, and the consolidation of Kádár regime began with a number of concessions. It seemed that those in power in both East and West preferred peaceful cooperation to confrontation. This challenging new setting forced the politically active Hungarian émigré circles to rethink their future role and strategy.

The UFHS/MEFESZ also felt the need to reorganize its activities according to some new preferences. They felt that their three most important tasks were defending democracy and defending human and minority rights (especially the rights of ethnic Hungarians beyond the borders of Hungary). This can be seen in the front cover news and articles. UFHS/MEFESZ would open public debates for its members to discuss recent economic, social, and political changes in Hungary, together with presentations by experts, and it launched a new solidarity campaign with Transylvanian Hungarians suffering from forced assimilation by the Romanian state.

The latter subject is of particular interest, as it was in part a sinister by-product of the massive reprisals following the brutal suppression of the Hungarian revolution of 1956. As is explained in an open letter to UN General Secretary U Thant by the central Geneva office of the UFHS, in Romania, especially in the cities in Transsylvania and Partium (where larger Hungarian-speaking communities lives), there had been massive peaceful solidarity demonstrations during the Hungarian revolution, and in revenge, thousands of students had been arrested and brutally beaten by the Romanian police. Years later, many of them were still kept in jail for nothing, while in Hungary a general amnesty has been announced and most of the revolutionaries had been released. U Thant was just about to pay a visit to Bucharest as a official guest, and he was asked by the UFHS to raise his voice in support of a general amnesty in Romania too. (Political prisoners started to be released from jail in Romania only a year later, in 1964.)