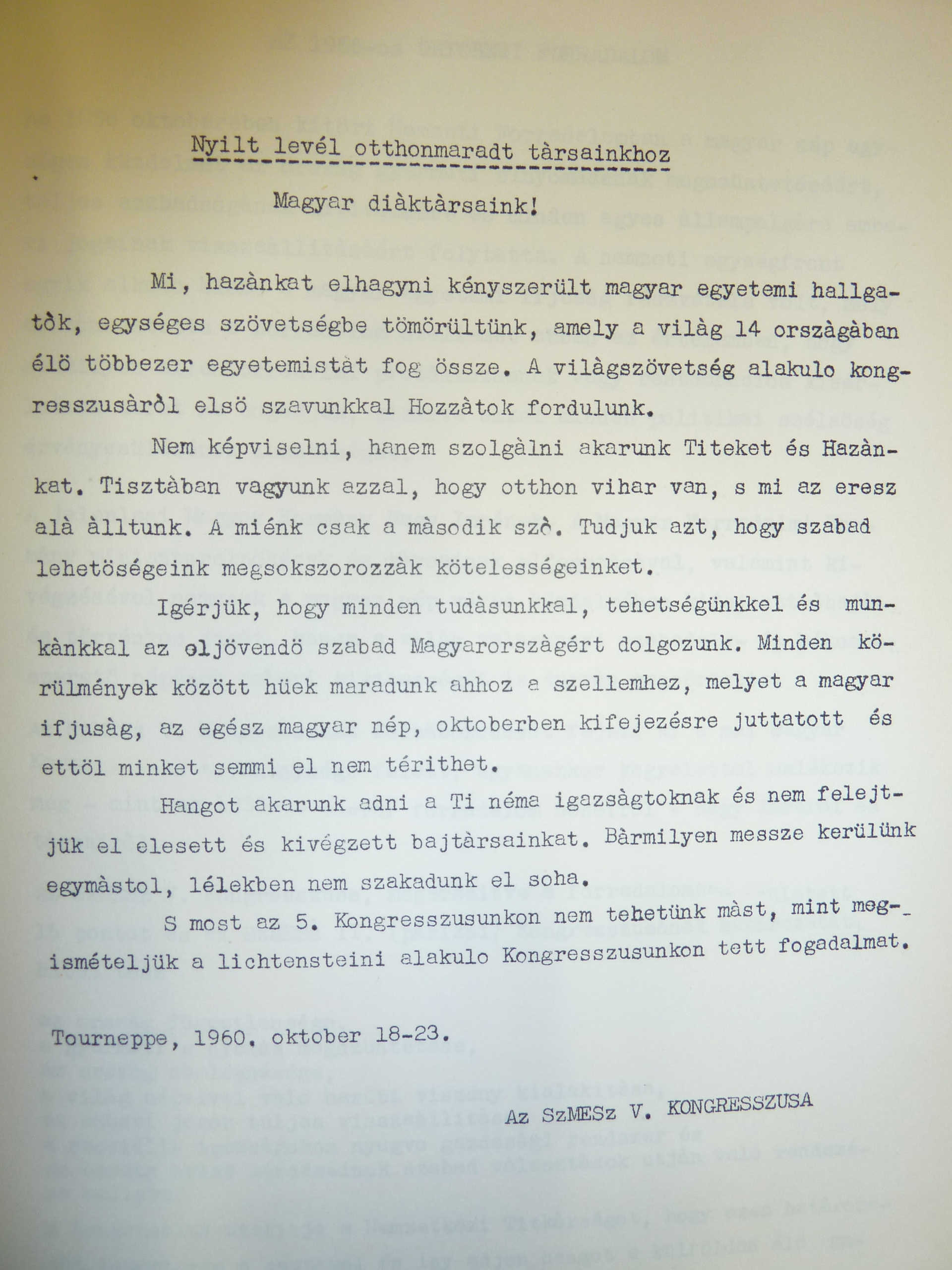 This was the very first public document issued by the émigré Hungarian student movement, this brief message to fellow students who remained in Hungary. Its purpose is quite clear: to reaffirm the union of all Hungarian students and to affirm a pledge that those who had fled Hungary for the West, however distant they may be from their homeland, would remain loyal to their country in spirit and never abandon the ideas of the revolution and the goal of an independent Hungary.

No more than half a year had passed since the great Hungarian exodus of late 1956 when, of the overall 200,000, refugees some 7,000–8,000 students fled to the West. (According to the official statistics, all in all some 29,000 students pursuing higher education remained in Hungary in early 1957, which meant that the country had lost some 20 or 25 percent of its students, which constituted a great demographical loss and a great intellectual loss.) The personal links of the members of the younger émigré generation to their native country remained vivid and strong, as did memories of the tragic moments of the revolution. Their losses are still painful: the loss of home, family, friends, comrades, and fellow revolutionaries, but at the same time, those who fled faced the challenge of starting new lives in the West and making shows of their unity as a new émigré community for the sake of their homeland. They had only just begun their mission, and they clearly felt a profound sense of responsibility. The declaration was read in Vaduz at the Chancellors’ Hall of the Lichtenstein Principality on Pentecost Sunday of 1957 with the solemn statement: “We do not want to represent You, but rather to serve You and our Homeland” and: “We also know that our freedom gives us more obligations.”

The opening speech of the Founding Congress held by Béla Jankó, the Union’s President, began with an homage to fellow students who had died as victims of the fighting in the streets of Budapest. (“It is hard to remember you all, dead friends, all 51 who lie there in the garden of the Medical Clinics. I could hardly identify your faces, and hardly remember all your names. 51 Hungarian students died there, and none of them was older than 24.” Magyar Diák / Hungarian Student 2 July 1957; a special issue published for the Founding Congress of the Union.) However, this grave motive returned at the end of the Open letter: “we will never forget our comrades who fell or were executed.” Instead of lamenting over the losses and victims it is more important to express the main points of the message sent to the fellow-students in Hungary: to declare the unconditional loyalty to and the patriotic as well as the emotional unity with them.

Open letter to our fellow students remained in Hungary

We, Hungarian university students having been forced to leave our homeland have joined into a union of alliances, representing thousands of students in 14 countries worldwide. With our first world from the founding congress of our union we turn to you.

Instead of representing we wish to serve You and our Homeland. We are fully aware of the fact, that the storm has not passed yet over our country and we are lucky to have reached an asylum. Therefore we may have the second world only. However, we do know that our freedom can only multiply our range of duties.

We promise to work for the future freedom of Hungary with all our efforts, talents, and abilities.  We will preserve the revolutionary spirit, which the Hungarian youth and the whole Hungarian people expressed last October, under all circumstances, and nothing can change our devoted efforts to do so.

We wish to give a voice to your silenced just case, and we will never forget our comrades fallen in the fights or executed. However distant we may be, in spirit we remain together with you.