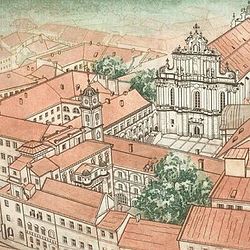 Almost every high school in the Soviet Union had a student scientific society. The aim of these organisations was to raise the new generation of researchers and lecturers, and popularise studies among young people, developing the ideological side of their views. Some student organisations went beyond these formal aims. In the late 1970s and 1980s, members of the Student Scientific Society of History at Vilnius University made attempts to look at new topics for research, discussions and presentations at conferences, which were not strictly forbidden, but also not approved and supported by the government of that time. The collection was formed after an interview with Vytautas Umbrasas, the leader of the Student Scientific Society at Vilnius University.