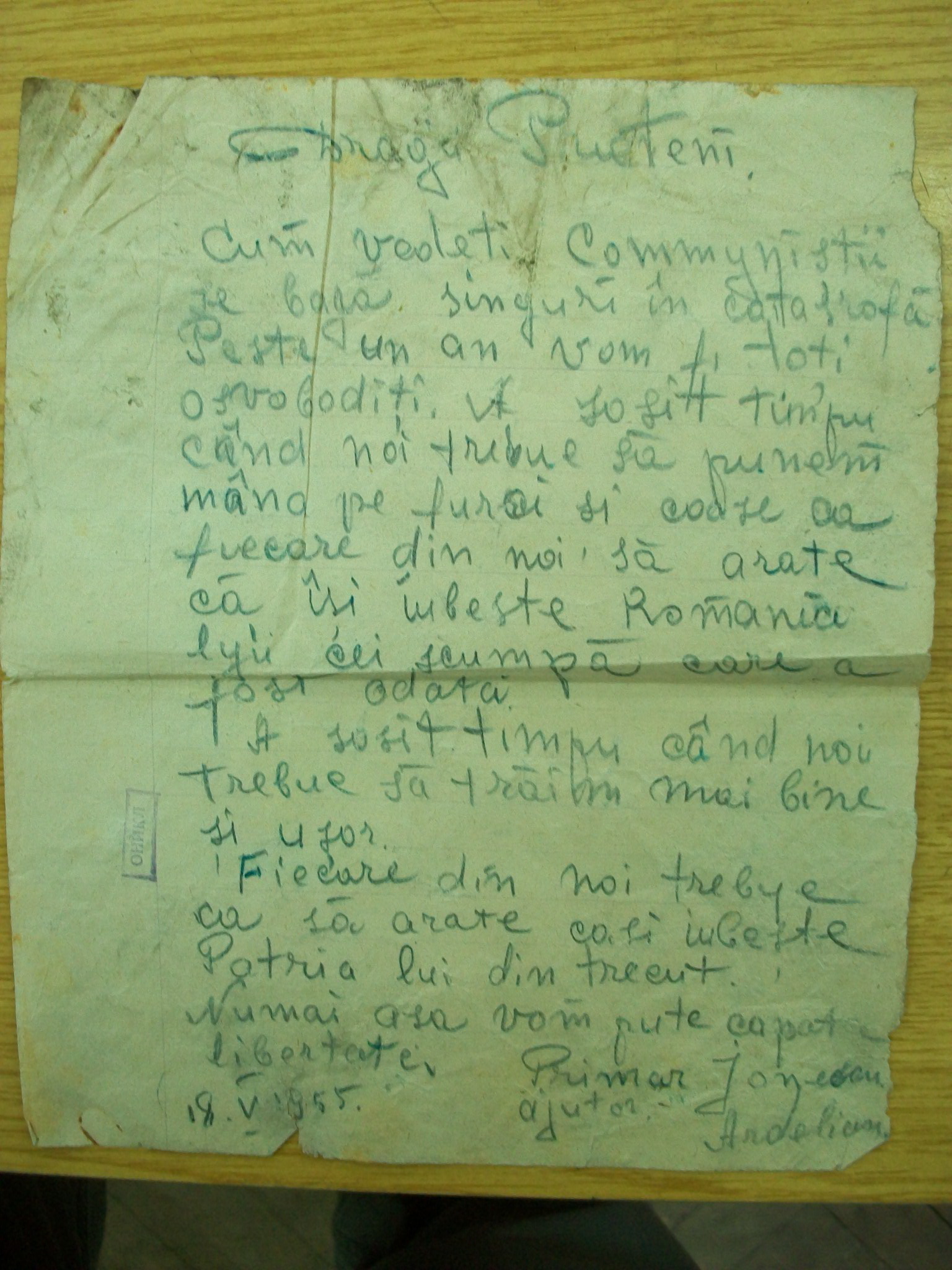 On the night of 18/19 May 1955, after suffering from verbal and physical abuse at the hands of two police officers at the Chişinău railway station, Zaharia Doncev produced four handwritten texts (leaflets) with a radical anti-regime message. He spread the four leaflets on the premises of the railway station and in the surrounding area. Doncev wrote the text on four white sheets of paper of notebook format, using a pencil. Three of the leaflets were in Russian, while the fourth was written in Romanian, in Latin script. The content of the Romanian-language and Russian-language texts was different. The Romanian text emphasised the crisis of the Soviet regime and appealed to the Moldavian people to rebel and show their “love” for Romania in order to regain their freedom:

“...as you can see, the Communists are getting themselves into a catastrophe. In a year, we will all be liberated. The time is ripe for each of us to take pitchforks and scythes in order to show that we love our dearest Romania that once was. The time has come for us to live better and more easily. Each of us must show his love for our former fatherland. This is the only way for us to win our freedom....”

The texts of the Russian-language leaflets were more explicitly anti-communist, more radical and more incisive in their criticism. One of them read as follows:

“Dear friends, very soon the whole Moldovan people will stand up for the interests that it had before the war. Communism is failing everywhere. Now they are going to find out how the poor Moldovan people lives. We have all become beggars; we have no bread, clothes or land. The time has come for us to rise and tell the communists: it is enough for you to get rich as flunkeys. The time is ripe for us to take revenge for this life of slaves. Each of us must do something to set us free from the communists. Let us prepare a powerful blow [for them]....”

The other two leaflets were less original, repeating the basic content of the one above. However, one of the texts also contained a direct reference to the “Jewish leadership” of the Communist Party, calling for “liberating our fatherland from communists and Yids [zhidov] who have climbed upon our backs” and were exploiting “all the people from the working class.” This passage is revealing for the persistence of anti-Semitic stereotypes within a part of the population and for the specific uses of the nationalist language originating from the interwar period to challenge the legitimacy of the Soviet regime. Although Doncev’s proclamations had no impact on a mass audience and were swiftly removed by vigilant policemen, they point to the patterns of the language of opposition that would emerge later. Besides the already mentioned interwar models of nationalist thought, another topic popular after 1945 was that of impending war with the West and the consequent “liberation” of Moldavia from Soviet domination. Despite the isolated nature of Doncev’s act of defiance, it was clearly indebted to broader patterns of anti-Soviet discourse that he probably borrowed from his earlier Romanian education, his family and his entourage. The context of the early Thaw is even more significant in order to understand Doncev’s motivations. The first signs of a more liberal approach to expressions of dissent, as well as the temporary weakening of police surveillance, provided a more favourable atmosphere for the voicing of discontent, which was to be confirmed by the impact of the Hungarian Revolution on the Soviet citizenry. By the time of Doncev’s arrest in December 1956, however, the party leadership and the KGB had moved decisively to reassert central control and crush any signs of open opposition to the regime. This also explains the harsh sentence in Doncev’s case, despite the overwhelming evidence that his actions had no impact on a wider audience. Still, the atmosphere of the Thaw played a role in the reduction of his prison term in 1960. In his appeal to the Soviet authorities, while emphasising his loyalty to the regime, Doncev also explicitly mentioned Khrushchev’s assertion during the Twenty-first Congress of the CPSU in 1959 that “we have no political criminals.” Although this was clearly intended to impress the recipients of his petition, it is significant that his case received a favourable resolution. The original versions of Doncev’s leaflets were not destroyed by the KGB operatives and are still part of his case file.