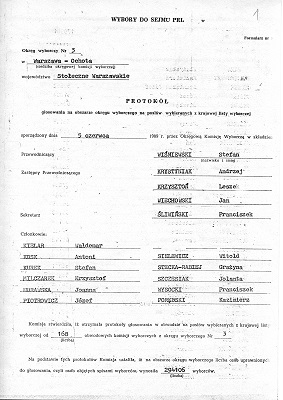 Jerzy Regulski was one of the most significant creators of the Polish local political system after 1989. He participated on Rountable Talks where he chaired the local government group. In 1989 he was elected a member of the Senate, in which he continued working on the local government reform and the relations between the different levels of authority.

Materials of Jerzy Regulski, donated to the Archives of Transition, map the reflection of the democratic opposition on the state of the Polish politics and society. In his notes, memoirs, and letters, Regulski started the discussion reaching beyond party interests and ambitions, and tried to envisage the potential future of Polish democracy in statu nascendi. The heritage of Regulski remains a unique source on the history of the parliament and the local democracy.

Regulski’s materials were donated to Archives of Transition in 2009. They contain 5 meters of document (92 files and 668 scanned documents).