Writer, scenarist, director, lyricist for Tamás Cseh, with whom he started to work in 1970. They composed some 1,200 songs, mostly in the early 1970s. However, they did not publicize these works in the early years. The songs, rather, were performed only privately. According to several people, they reveal more about life during the Kádár era than history books.

Born Géza Vetró, he later acquired the name Rozner from his foster father, which he replaced with his grandfather’s family name, Bereményi, when he became a legal adult. Studied Italian and Hungarian linguistics at ELTE and later worked as a dramaturg and as artistic director and a theatre director.

He published thirteen books, directed seven films and twenty-one plays, and wrote twenty film scripts and forty-six play-scripts. Member of the European Film Academy and the Hungarian Academy of Arts. 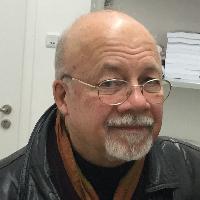 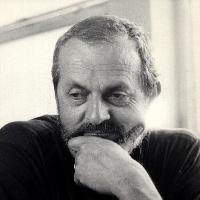 Horia Bernea (b. 14 September 1938, Bucharest – d. 4 December 2000, Paris) was one of the most well-known Romanian painters of the second half of the twentieth century. After being twice refused admission to the Academy of Fine Arts in Bucharest, he turned towards various other disciplines, declaring in order to be admitted that his father, the sociologist Ernest Bernea, who was a political prisoner, was in fact dead. He prolonged his studies in order to avoid the military service that was compulsory in the communist period, and studied mathematics and physics at the University of Bucharest (1957–1958), and then at the Technical School of Architecture (1959–1962) and the Drawing Section of the Pedagogical Institute (1962–1965). Horia Bernea was a representative of the so-called Poiana Mărului school, named after the isolated mountain village where a number of painters withdrew in the 1950s and 1960s as a place of refuge away from the control of the censors. It was not a group with a well-defined aesthetic orientation, so much as “an informal and heterogeneous group of artists, with a fluctuating composition, who had shared preoccupations and affinities” (Popica 2013). Later, from 1985, Horia Bernea was a member of the Prolog group, along with de Constantin Flondor, Paul Gherasim, Horia Paștina, Cristian Paraschiv, and Mihai Sârbulescu.

According to Andrei Pleşu, Horia Bernea achieved in his painting “a sort of earthly paradise, in which the voices of the West and of Byzantium interpenetrate.” According to his own testimony, his return to the values of Eastern Christianity was not incompatible with the avant-garde, but an experiment that combined tradition with modernity in the specific context of the Ceauşescu dictatorship. “It was more a matter of re-sacralising the act of making than of bringing religious paraphernalia into painting. This began to change a little at the point when Ceauşescu began to demolish, when atheism began to manifest itself so strongly, as it still manifests itself. And I felt the need to bear witness through faith, church towers, the cross, the processional banner, iconostases, subjects that were almost untreated in painting, precisely out of the desire to manifest Orthodoxy in a direct way.”

In the course of his career, Horia Bernea took part in many solo and group exhibitions, both national and international, and received numerous prestigious awards in his field. After the fall of communism, he was for almost a decade the director of the Museum of the Romanian Peasant (Muzeul Țăranului Român – MŢR) in Bucharest. During his time as director, he managed to bring about a spectacular and beneficial metamorphosis of the institution, which had taken over the building of the former Museum of the Romanian Communist Party. “I am dominated by a strong belief in the values of peasant art, in its validity, and by respect for those people who were unable to defend themselves,” Horia Bernea confessed. Following its transformation according to Horia Bernea’s vision, the Museum was accorded in 1996 the distinction of European Museum of the Year. “When I stated that the Museum was subversive, I had in mind a subversion of the Christian type, one that makes you feel and believe that the world is good by virtue of its purpose, beautiful by virtue of its creation, complex by virtue of its life, and spiritual by virtue of its materiality,” reflected Horia Bernea, speaking of the metamorphosis that he achieved at the Museum of the Romanian Peasant.

Sándor Bernáth(y) was a painter, graphic designer, musician, founding member of the Bizottság (Committee) band, and member of the Vajda Lajos Studio. From 1975, he was an active participant of the avant-garde art scene. While he started his career as an autodidact painter, he was also tied to the underground music life from its very beginning: he designed street posters and book and record covers. For example, he was the one who designed the covers for ős-Bikini (ancient Bikini). From 1977, he was a member of the Leninvárosi Kísérleti Műhely (Leninváros Experimental Workshop), and in 1978, he joined Fölöspéldány csoport (Excess group). His first exhibition took place in 1981, at the Studio of the Young Artists’ Association. His paintings feature photographs published in various newspapers, enlarged, reinterpreted, and full of political and social criticism.

In 1980, András Wahorn, István ef Zámbó, and László feLugossy formed the band A.E. Bizottság (Committee), with Bernáth(y) as guitarist. During the initial period he was the one who organized many of the concerts, since he was the one with a telephone and an apartment in Pest, and they often built the equipment that was hard or impossible to acquire. While Bizottság became legendary over time, Bernáth(y) does not like to dwell on the past. As he put it in a 1997 interview: “I like to pay attention to the time I live in, I am interested in what I am doing right now. I do not even understand from where young people hear about Bizottság, and why they are interested in it.” At the time he was against re-releasing the two records as well. As he sees it, there were too many compromises: only a small portion of their repertoire was released, and even that was heavily censored. Meanwhile, Bizottság was more of a “a joke-dadaist artist band,” so their lyrics were not essentially political. Nonetheless, the process meant additional police reports, summons, and hearings. Due to their disagreement over the upcoming albums, after a concert where Bernáth(y) was deliberately playing on a untuned guitar and nobody mentioned a thing, he left the band.

Bernáth(y) was planning to give up his career as a musician altogether, but fate had other plans: shortly after he left Bizottság, he played in the bands Dr. Újhalnal, Matuska Silver Sound, and Szkárosi & Konnektor RT. While Matuska, launched in the middle of the ’80s, was not a particularly popular band, it was very important for Bernáth(y): with two of his friends, they started to make “machine music.” He was always interested in technology, and when he was a kid, he wanted to be mechanic, repairing and making radios. However, neither the public nor the authorities appreciated the music made with computers: for instance, one of the newspapers, Esti Hírlap (Evening Paper), wrote about it as an inhuman and antisocial phenomenon better avoided.

After the transition, Bernáth(y) had an important role in the development of Hungarian electronic music, and as such, he is one of the founding fathers of techno in Hungary. In the ’90s, he was the one who organized a “techno-tent,” Love Barricade, at the Sziget Festival. In 1994, he started a techno live act formation with his son, Zsiga, under the name Bernathy & Son, which is regarded as the first electronic live act in Hungary. They were active up until Bernáth(y)’s death in 2012, and performed at a number of Hungarian and foreign events. He also established the music club Supersonic, and later Vörös Yuk & Kék Yuk (Red Hole and Blue Hole). Around that time, he was the editor and art director of the art magazine Új Hölgyfutár (New Women’s Courier), and in the ’90s, he and his son were producing the art magazine Gépszava (The Machine’s Voice), focusing on techno culture. He also regularly appeared in documentaries about the topic, such as “Az egyén diadala” (The triumph of the individual) by Zsolt Füstös and “Patrik népe” (Patrick’s people) by Gábor Zsigmond Papp. In 2011, he has awarded the Mihály Munkácsy Prize.
read more

After the 1989 revolution, she got a compensatory pension granted to formerly dislocated citizens, and in the 1990s she established the Bethlen Foundation to support disabled people. Following the family tradition, she used her experience and financial resources to help those who suffer from physical disabilities. The foundation also operated a bookbinding workshop in Târgu Mureș. The Countess Bethlen reckons among the property of the foundation all the objects belonging to the collection.