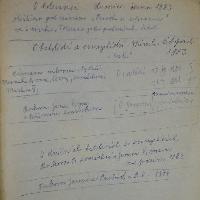 The machine-read transcript of the audio recorded interviews from the secret meetings which took place in Božena Komárková´s flat, comprised of 42 pages. She discusses her life, reflection of T. G. Masaryk, St. Augustine, relationship to democracy, Christian faith, Socialism and Christianity, church affairs after the Communist coup in 1948, etc. The transcription is crossed out and supplemented by Božená Komárková´s comments. Part of the collection is also the original audio record. This document shows authentic and original views from the meetings and a wide range of views from the prominent figure of Protestant dissent - Božena Komárková. 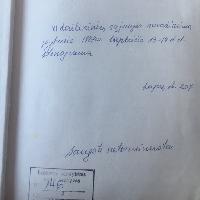 Transcripts of 11th Congress of Union of Artists 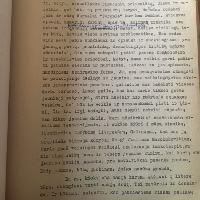 The 5th Congress of Soviet Lithuanian Writers, which took place on 27-28 May 1970 in Vilnius, was a significant event among local writers, showing that ethnic values had become one of the main issues with local writers, but at the same time revealing that there were limits to Modernist expression. During the Congress, writers of the older generation, who dominated the Union of Writers, criticised their younger colleagues, calling their Modernist position Formalism. At the Congress, writers such as Eduardas Mieželaitis, Algirdas Pocius, Vytautas Bubnys and Algimantas Baltakis criticised authors such as Jonas Mikelinskas, Romualdas Lankauskas and Juozas Aputis, for disassociating themselves from tradition and everyday problems.
This document is important, because it reveals that the older generation had adapted to the stricter ideological policies of Brezhnevism, and disciplined their younger colleagues. 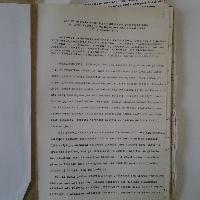 Transcripts of Sniečkus meetings with the members of the Union of Lithuanian writers
Transcripts of Sniečkus’ meetings with members of the Union of Lithuanian Writers at the very beginning of 1957, after the mass protests by students in Vilnius and Kaunas in 1956. During these two meetings, Lithuanian writers raised questions about the Lithuanian cultural heritage (to restore the Lithuanian street names in the cities, especially in the capital Vilnius, about the use of the Lithuanian language in administrative bodies, etc). These questions were raised by the protesters during the 1956 events. The first secretary accepted that during the Stalinist period, a lot of mistakes had been made in cultural policy. However, Sniečkus stressed that all changes in society had to come from the leadership of the LCP. These documents are known only to researchers.
read more 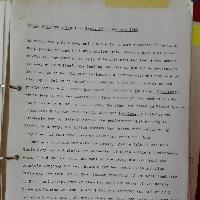 Travel reports of lecturers and members of the Jan Hus Educational Foundation are embodied in six volumes. In terms of time, they cover the period from 1983 to December 1989, mainly from Prague, Brno and Bratislava. The reports include the length and main purpose of the stay, a description of the trip including possible complications in crossing borders, meetings with other people and subjects of their interviews, information on specific activities of the state police, etc. Visitors of Czechoslovakia also proposed other forms of cooperation in their reports. There are unique and very specific documents mapping the concrete forms of the Czechoslovak dissent linked with underground universities, efforts of the foreign organisation and important Western representatives of science to support the unofficial educational environment, and documents describing the contemporary social and political conditions in Czechoslovakia including the activities of the state police.