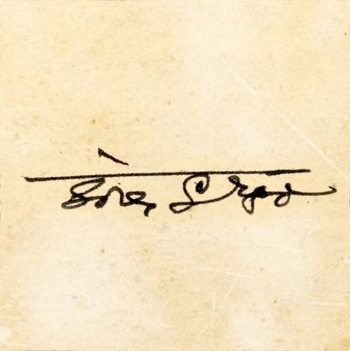 Grgo Šore (Seget Donji, February 15, 1915 - ? 2000) was a construction technician and a Croatian political prisoner. After the establishment of the Independent State of Croatia (NDH), he served as an officer in the Croatian Home Guard. In the summer of 1942, due to disagreements with the NDH policy which gave Dalmatia to the Italian occupiers, he was decommissioned at its own request. After this until the summer of 1944, he worked as a construction technician on the construction of the embankment along the Sava River and then went to Travnik, where he wanted to re-join the Home Guard. He had tuberculosis and was forced to undergo treatment at a hospital where he awaited the end of the war.

Given that he did not take part in activities against the Partisan Movement, and his brother died in the Partisans, Šore continued to work in socialist Yugoslavia as a construction technician. In the Construction Department of the Travnik County National Liberation Committee, he worked on reconstructing buildings destroyed in the war. After the abolition of the Travnik County National Liberation Committee in 1947, he became director of the construction company Vlašić. He also received an offer to become a member of the Communist Party of Yugoslavia. The offer was accepted, but out of fear because he thought he might encounter problems if he had rejected the offer.

However, before formal admittance to the Party, and immediately after the publication of the Cominform Resolution in June 1948, the Party's lost confidence in him. In the spring of 1949, the State Security Administration launched an investigation against him, and he was arrested in June of that year. According to Šore, the motive for the investigation and arrest was his informal conversation with an acquaintance on the subject of current political relations with the Soviet Union. After his arrest, he spent three months in a Sarajevo prison, and in September 1949, with a group of prisoners from Bosnia and Herzegovina and Montenegro, he was among the first to be sent to the prison camp on Goli otok.

He spent three years in the prison camp, where he experienced the most brutal methods of political “re-education.” As a construction technician, he participated in the design of the camp’s buildings, but he was not given special treatment as a result. Due to harsh physical labour, starvation and psychological abuse, he again succumbed to tuberculosis. After unsuccessful treatment at the prison camp hospital, he was transferred to Sarajevo for treatment in 1953 and was soon released. Although he felt like a second-class citizen, he was able to get a job in Travnik. He had steady employment until his retirement in 1975, and he even served as director of a carpentry company in Travnik.

Even so, Šore felt humiliated and marked, and at the beginning of the 1980s he decided to write down his memories of Goli otok. Among the several variants of his manuscripts, the last version of his memoirs, which he wrote in 1998, include explicit descriptions and drawings of the torture he had endured. His manuscripts also testify to the arrival of Aleksandar Ranković on Goli otok (Interview with Peić Čaldarović, Dubravka). The arrival of the chief of the Yugoslav repressive apparatus on Goli otok suggests that the idea of opening the camp had to have come from the highest party leadership led by Josip Broz Tito (Previšić 2014, 94).

Šore concluded his recollections with the words: "Let there be no vengeance for to these events. I forgive, but I cannot forget and I hope that this will never happen again." At the beginning of 2000, the Croatian History Museum bought its 16 documents from the period 1945-1998 from his son Stjepan (Interview with Peić Čaldarović, Dubravka).