Official Sentence in the case of Mihai Moroșanu, 2 November 1966 (in Russian) 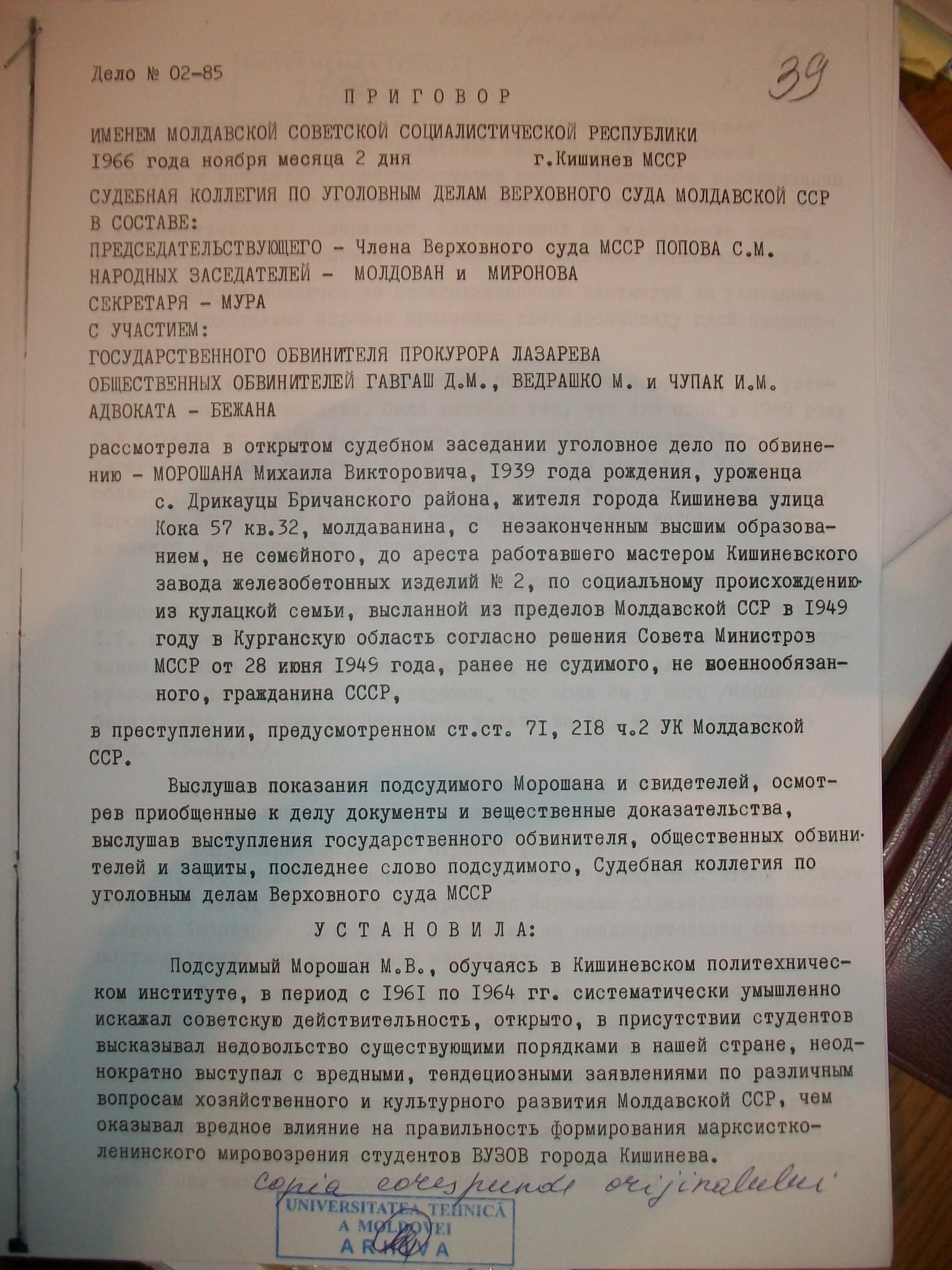 Following Mihai Moroșanu’s arrest in late July 1966 and his subsequent trial, the sentence in this case was issued on November 2, 1966. As in other similar instances, the text of the sentence carefully summarised Moroșanu’s misdemeanours and “crimes” against the Soviet order. According to this document, his record of open opposition to the Soviet regime could be traced back to his student years at the Polytechnic Institute. Even before his expulsion from the institute in October 1964 due to his involvement in the laying of a floral wreath to Stephen the Great’s monument, he allegedly displayed “un-Soviet” behaviour. Thus, according to the testimonies of several among his fellow students, Moroșanu “systematically and purposefully distorted Soviet reality; openly, in the presence of other students, expressed his discontent with the existing order within our country, and frequently made pernicious and tendentious statements concerning different questions of the economic and cultural development of the MSSR.” While these general accusations were serious enough from the authorities’ point of view, they paled in comparison with his nationalist views. Moroșanu was accused of “impersonating an alleged defender of ‘Moldavian national culture and art’” and, most importantly, of “purposefully conducting propaganda of his ideas, [which were] filled with a nationalistic and chauvinistic content, being directed at fomenting enmity and hostile relations between different nationalities.” The document is quite revealing in connection with the personal roots of Moroșanu’s opposition to the regime. His “anti-Soviet” attitude was allegedly triggered by his family’s deportation and particularly by his father’s arrest and conviction to seven years of forced labour in 1949. Moroșanu’s family background appeared as especially untrustworthy not only because of their identification as “kulaks,” but also because his father purportedly “was a leader of a sect of Jehovah’s Witnesses, which had an impact on Moroșanu’s education.”  Apparently, his activities intensified starting from the summer of 1963, when, during a discussion about the poet Evgeni Evtushenko, he was trying to convince his colleagues that the Soviet press was “lying.” On this occasion, he also displayed “hatred” toward Communists. More ominously, Moroșanu “propagated ideas of a nationalistic and chauvinistic character among students, demanding that his colleagues speak only Moldavian to him.” He also openly condemned the placing of Lenin’s statue on the main city square, arguing that Stephen the Great’s monument should replace it. Thus, the incident involving the ceremony at the statue was construed as the culmination of numerous instances of nationalist-inspired acts on Moroșanu’s part. The sentence justified the decision to expel Moroșanu from the university. However, it also emphasised that, during his stint as a worker at the reinforced concrete plant in Chișinău, had Moroșanu continued his hostile propaganda activities. Citing several witness accounts, the court concluded that these acts aimed at ”fomenting racial and national hatred among the plant’s workers.” Concretely, he was accused of openly voicing his views that “in the Moldavian SSR everyone should speak only Moldavian, [that] all the official signboards and inscriptions should be writtenonly in Moldavian, that the Moldavian  language should use only the Latin script, because it belongs to the group of Romance languages, and thus the Russian alphabet is foreign to the Moldavian language, and that persons of ‘non-Moldavian’nationality do not have any right to work in Moldavia if they do not speak Moldavian.” To compound the picture, Moroșanu allegedly displayed anti-Russian tendencies and occasional anti-Semitic behaviour toward his co-workers. He also condemned the redrawing of the Bessarabian borders in 1940, when the northern and southern districts of this region were transferred to Ukraine, while the rest of Bessarabia was merged with the MASSR to form the new MSSR, arguing that these were Moldavian lands “occupied by Russians” and “illegally transferred to the Ukrainian SSR.” In this context, it is not surprising that the incident in the Chișinău shop on 28 July 1966 that led to his arrest was treated as a dangerous manifestation of “nationalism and chauvinism” and a serious breach of public order. This conclusion was in line with the increasingly intolerant attitude of the authorities toward any displays of “local nationalism” in the late 1960s. Moroșanu’s situation was undoubtedly aggravated by his refusal to admit his guilt and his persistence in the “mistaken and pernicious character of his views, oriented toward fomenting national divisions and hatred among persons of different nationality.” Moreover, he even “attempted to propagate these views during the entire judicial inquiry.” He only partially admitted being “wrong” incollecting the students’ signatures to protest against the relocation of the statue. His stubborn refusal to bend to his accusers’ wishes and his failure to “repent” were taken into account by the court’s final sentence, which emphasised the “particular seriousness and social danger” of the “crime” allegedly committed by Moroșanu. Despite his physical disability, on 2 November 1966 the defendant was sentenced to three years’ imprisonment, on the basis of Article 71 (undermining the national and racial equality of Soviet citizens) and Article 218 part 1 (hooliganism with aggravating circumstances) of the Penal Code of the Moldavian SSR. The material evidence in the case was deemed “without any value” and subsequently destroyed. Moroșanu’s sentence is revealing for the “hierarchy of dangerous behaviour” constructed by the Soviet authorities in this period. Local nationalism was clearly one of the most condemnable forms of opposition to the regime, especially on the Soviet periphery.