A newspaper reports on court trials for the offences against the people and the State by enemy propaganda, Vjesnik, 1972-1973. Press clipping 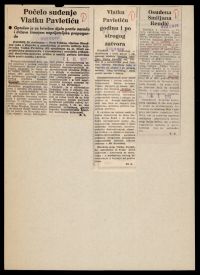 The card contains three cut and glued press clippings containing reports on trials for “offences against the people and the State by enemy propaganda.” As a criminal act aimed against the people and the State, enemy propaganda was defined in the 1951 Criminal Code as propaganda by illustration, writing, or public speech at rallies or otherwise, aimed against the state structure and social system, and against political, economic, military or other important institutions of the people’s government. Strict imprisonment was stipulated as punishment for the perpetration of such a crime.

Two press clippings refer to trials against Vlatko Pavletić (Zagreb, 2 December 1930 – Zagreb, 19 September 2007), the then editor-in-chief of the magazine Kritika, a publication of  the literary organization Matica hrvatska and the Croatian Association of Writers. The third clipping refers to a trial against journalist Smiljana Rendić (Split, 1926 – Trsat, 1994), because of her article “Izlazak iz genitiva ili drugi hrvatski preporod” [‘Exit from the genitive or the second Croatian revival’], published in 1971 in the issue no. 18 of the same magazine, which was therefore banned. Together with a group of officials of Matica hrvatska,  Pavletić was arrested in 1972 and then sentenced to a year and a half of strict imprisonment as a Croatian nationalist on charges of “attempting to overthrow and alter the state structure.” Rendić was sentenced to a year’s imprisonment and was banned from public activity for one year after her release. They demonstrate a number of cases of prosecution against members of the Croatian Spring that followed the suppression of that reform movement in Croatia at the end of 1971. A significant part of this prosecution encompassed cultural institutions and humanist intellectuals. The work of Matica hrvatska and its magazine Kritika were banned by the communist authorities. The collection includes a number of press clippings about these events, grouped in several topics in the categories for Culture (filing folders KUL 320 and KUL 491) and Domestic affairs (filing folder UP 27 and UP 28), and in the dossiers Public Persons category. The documents are available for research and copying.