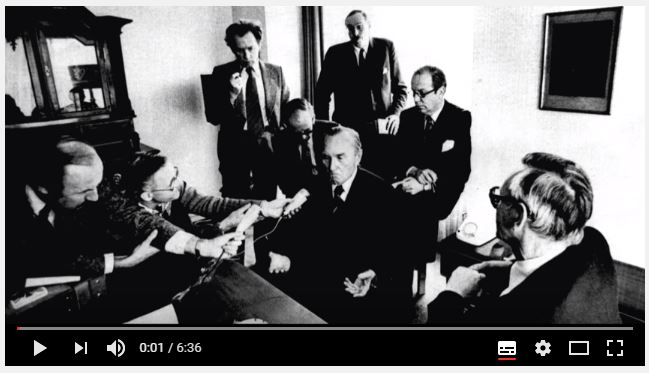 At the InterContinental Hotel in Prague on 1 March 1977, Czech philosopher and dissident Jan Patočka met with Max van der Stoel, the Dutch foreign minister, who was at the time on an official visit to Czechoslovakia. The meeting was initiated by the Dutch journalist Dick Verkijk at a time when the Charter 77 signatories were persecuted and silenced by the police. This was the first official meeting of a Charter 77 spokesman with a foreign political representative who recognized Czechoslovak dissent.

Patočka explained in German to the minister and, through a recording, to the international public, that the aim of the Charter 77 was not to fight against the regime, but to demand the observance of the valid constitution and other laws. A day later, President Gustáv Husák called off official talks with the Dutch minister. Jan Patočka was ill at the time and after this meeting he was subjected to days of interrogationby the State Security. Eventually, on 13 March 1977, he died.

This unique sound recording documenting the meeting between Patočka and van der Stoel was made by Dick Verkijk, who initiated and attended the meeting. The recording is stored in the Jan Patočka Archives, which has also decided to make it public and uploaded it to YouTube.

Dick Verkijk played this sound recording during a ceremonial meeting organised on 1 March 2017, on the occasion of the 40th anniversary of this event, in InterContinental Hotel in Prague. Several high representatives of the Czech Republic took part at the ceremony, including the Prime Minister Bohuslav Sobotka and Minister of Foreign Affairs Lubomír Zaorálek. The ceremony was also attended by, among others, the Vice President of the European Commission Frans Timmermans and by the director of the Jan Patočka Archives Ivan Chvatík. Frans Timmermans stated at the ceremony that the activity of the Charter 77 Czech dissident movement had a significant influence on the fall of the Iron Curtain and the end of the Cold War in Europe.