The manuscript of the article deals with Brandt's reminiscences on his role in composing and signing of Declaration on the Name and Status of Croatian Language in March 1967. He described the anxiety among the leaders of Matica Hrvatska when the text of the Declaration had been published. Besides his own role in this matter, he also stressed that Matica Hrvatska liberated itself from the secret policy in the time of the so-called liberalization of Titoism in the 1960s. From Brandt's point of view, the central personality of Declaration was Professor Ljudevit Jonke, who worked in the Croatian Language Department at the Faculty of Humanities in Zagreb. In the end, Brandt recounted the destiny of Declaration’s creators, who were expelled from Croatian scholarly and cultural life just as he was him after the suppression of the Croatian Spring in 1971.

Brandt already wrote this manuscript in 1986. In the introduction to its public publication after democratic changes in Croatia in 1990, he described the political and social circumstances which prompted him to write this text. Namely, he felt that it was necessary to adequately respond to Serbian intellectuals from the Serbian Academy of Science and Arts and their “Memorandum,” which called for the transformation of Yugoslavia into the centralized state under the control of its largest federal member, the Socialist Republic of Serbia. Brandt then attempted to propose an initiative to the Yugoslav Academy of Science and Arts in Zagreb so that it would respond to the Belgrade “Memorandum” and publish it in the media. However, Brandt did not find any collaborators there for this initiative, so that he began to write a line-by-line critical response to the postulates set forth in the “Memorandum.” His essay, under the title “Antimemorandum,” written in 1986, could not appear publicly until 1990, for Brandt thought that if he dared to publish it in the Socialist Republic of Croatia of the time, such a move could have led to his arrest.

This review was written after January of 1970, when the Central Committee of League of Croatian Communists attacked the unitarism of Miloš Žanko, who, in the Serbian newspaper Borba, characterized the entire activities of Matica Hrvatska as “chauvinistic nationalism.” Brandt dissociated himself from Žanko's objections, remarking as the vice-president of Matica Hrvatska that its members and organizations did not waver in their belief in “democratic and self-management socialism,” nor forsake the struggle for “the equality, brotherhood and unity of the Yugoslav people.” Brandt's generation wanted to exploit the reforming momentum of socialism from the end of the 1960s, to promote the Croatian national movement and the renaissance of national culture in the context of the one-party dictatorships and the ideological monopoly of Communist party. 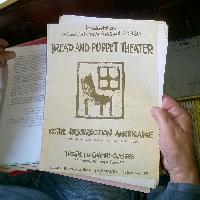 Gábor Klaniczay traveled to Paris for the first time in 1967, when he spent one year in the city. This journey was followed by more. During his travels, he collected an array of different material: leaflets, proclamations, and posters about alternative cultural life and student movements. These documents reveal the kind of ideas, trends, performances, and exhibitions he was interested in at the time. This particular item is a leaflet of Bread and Puppet Theater’s performance in Paris, entitled “Notre résurrection américaine.” 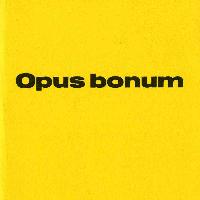 Brochure on the founding of Opus Bonum

A Brochure on the founding of the Opus bonum community, which was inherited by Josef Florian, the initiator of modern Christian culture in the Czech lands. The brochure was published by Opus bonum in 1981 and presents its editorial program and an overview of the diverse activities of this organization.