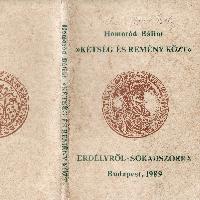 Homoród, Bálint [Béla Nóvé]. Kétség és remény közt: Erdélyről sokadszorra (Hopes and Doubts: Once Again on Transylvania), 1989. Book
In May 1989, under the pen name Bálint Homoród, Béla Nóvé published a book of selected articles, pamphlets, translations and documents entitled, Hopes and Doubts. Once Again on Transylvania. Five hundred copies were printed of the small booklet, which was designed and illustrated by the author. It contains a number of articles and documents previously published in Deadline Diaries - Transylvanian Monitor, along with fresh reports, news and timely documents on the deepening Romanian refugee crises, new goverment restrictions on minority language use, education, and culture, as well as the plans to demolish thousands of Transylvanian villages. It included the author’s translations of Amnesty International and International Helsinki Federation reports on human rights violation in Ceausescu's Romania, and Karl Joachim von Schwarzenberg's testimony before the European Parliament. As he argued in the bilingual summary:

The author is well aware of the hard situation today in Romania. Being a Hungarian with many close contacts in Transylvania, he feels a deep involvement and responsibility for the 2,2 million Hungarian ethnic minorities suffering from forced assimilation under Ceausescu's rule. However, he is far from giving any chauvinistic statement against the Romanians. [...] Instead, he strongly emphasizes the need for mutual solidarity among different ethnic groups, without which, there is no peaceful and democratic solution to the present crises. [...] God save and help us all to survive in good hope these hard days in Eastern Europe.
read more 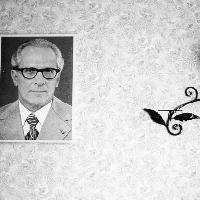 Honecker Portrait in the office of the mayor from Severin

The black and white image (20,3 x 30,3, on paper) belongs to a series of images capturing everyday life in the GDR and in particular motifs which Nagel encountered on the daily basis in the village of Severin. These images have been taken over a long period between 1982 and 1988.

The image capturing the portrait of Erich Honecker reflects Nagels witty approach to symbols depicting the presence of the regime in the public space. Honecker portrait is not the focus of attention of the picture, but rather it is captured symmetrical to the banal decorative floral element on the wall same sized as the portrait of Honecker. The floral decoration seems to rather take over the entire image also on the background of the floral wallpaper, thus making Honecker presence in the image rather peripheral. 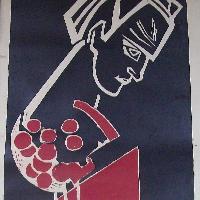 Vasyl Symonenko was a well-known Ukrainian poet, journalist, and human rights activist. Like many of his contemporaries, he was emboldened by Khrushchev's Thaw and became much more politically active in the early 1960s, working with Horska and Les Taniuk to find mass graves of NKVD victims outside Kyiv. After locating one grave site near Bykivnia, this trio wrote the Kyiv City Council of its location in “Memorandum No. 2.” As a consequence, Symonenko was severely beaten by police, which exacerbated his kidney disease and resulted in his untimely death at 28 in 1963.

This placard was created by Alla Horska after the death of Symonenko, which both rocked and emboldened this community of activists. Included in the painting were Soviet symbols: the hammer and sickle, overlain with a bayonet and other weapons pointed at the individual, killing him and drawing blood. The droplets of blood were rendered here as berries of the guelder-rose, one of the national symbols of Ukraine. Symonenko's death marked the beginning of a decade of repression against Ukrainian artists, intellectuals, human rights activists, and citizens. Implicit in Horska's imagery is the squelching of another national cultural revival in Ukraine by the Soviet state. 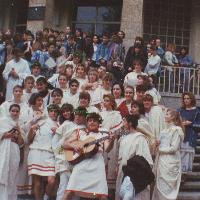 Horvat, Vlatka. The students of the 4K grade at Norijada in Zagreb, May 1989. Photo

Norijada is the colloquial name of the celebration day for Zagreb secondary school students, which usually falls on the May 30. On that day, seniors from all around Zagreb are officially entitled to mark the end of their schooling, and "go crazy" (noriti or ludovati) for the last time before setting out for more serious business, preparation for graduation and university studies. Anthropologically speaking, it was a kind of a rite of passage toward adulthood. This ritual ­­– most probably originating in the post-war period – in the classics program secondary school in the late 1980s was especially colourful because the students would wear ancient Roman costumes in order to highlight the orientation of the school. These were typically white togas for boys and luxurious white long dresses for girls. One also had to pay attention to authentic hairstyles and jewellery, because it significantly contributed to the overall impression. On this occasion the school students would act out rather loudly and colourfully.

The standard activities generally transpired as follows: first, the students would gather on the main staircase of their school, and begin singing songs that usually describe different (bad) traits of their teachers, who had to remain quiet for the sake of peace. The ties with their student status were visibly broken, and equality with the adult world, which allowed some degree of criticism, was perhaps the inherent meaning of this procedure. At the end of this event, one of the students, usually the funniest, would read the ‘last testament’ of the departing generation to the younger ones. The testament usually consisted of the ten commandments, which reversed the house rules of the school (for instance, “Never greet a teacher when one passes by or near you,” etc.). The first part of separation was thus finished, and the students would finally leave the school. They went out to the streets to meet students from other schools and display solidarity with them. This was the moment when real Norijada began, and students officially announced their separation from their previous life. On that day the students were allowed to do anything (except commit crimes). They would wander around, or swim in the wishing well and other fountains, or tease chance passers-by. They would usually get dead drunk and smoke heavily, and everybody was invited to do so because everybody was supposed to feel the same way. Moreover, in order to leave some trace of their “crazy” generation, students usually wrote graffiti on walls, citing their class, school and the year of the Norijada. 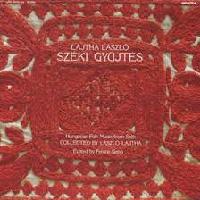 László Lajtha first travelled to Szék (Romania), in December 1940, and collected folk music there until January 10, 1941.  His interest in folk music, however, started years earlier, in the 1910s, with his folk music collecting trips to Transylvania. After 30 years he began to focus on instrumental music, which was less well known, and in February of 1941 he organized travel for local singers from Szék, to Budapest, Hungary, in order to record their traditional music.  On 17–22 February 1941, Gyula Ortutay helped Lajtha record the Szék performers in the Magyar Rádió (Hungarian Radio) studio. These records were published through Patria Audio. Lajtha, from the outset of his collecting work, emphasized that when documenting folk music, transcribing lyrics or scores is not enough—the original voices and sound recordings are essential. The Szék Collection contains every document in connection with these recordings: letters, documents etc., which also demonstrate the circumstances of traveling in 1940–1941. This important collection reflects the life of Hungarian minorities living in Transylvania. After collecting and recording these works Lajtha also dealt with the Szék Collection by writing academic analysis of its content, but he could no longer travel there.