János Kenedi edited a volume entitled “Profil,” which was one of the first samizdats in 1976. The illegally published book was comprised of essays for which permission to be published had been denied. 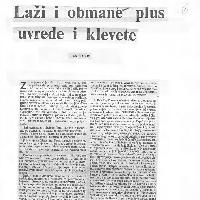 Ante Kesić responded to Krsto Papić's "Lies and deceptions" (see the featured item in the "Ivan Aralica Collection") in the text "Lies and deceptions plus insults and slander,” in which he provided counter-arguments to Papić’s statements. Kesić accorded particular attention to accusations on “fabrications” related to his reading of Papić's and Aralica's screenplay for the prospective movie. Kesić criticised the representation of the teacher-training school in Dalmatia and the education of that time. He argued: “They turned the humane school of the new society into a place for venting one’s base instincts and torture. This place was controlled by some hypocrites, careerists, ambitious female students/lovers, who as under-aged girls reign over the school from their fornicatory beds .” Furthermore, he stressed that although the Party was never mentioned, it is nevertheless indirectly represented as a source of evil because the four people who ruled over the school could not position themselves above it, i.e., it is clear that they featured as the Party leadership in disguise. “Could the Party be abrogated by two screenwriters and removed from the historical scene, where it bore all social power? Or to bury it somewhere deep behind the scenes and transform it into an accomplice in crime ?”

Furthermore, Kesić quoted the book A History of the League of the Communists of Yugoslavia (Belgrade: Izdavački centar Komunist, 1985, p. 374) to underscore the positive role of the Party in education during the years of the Cominform crisis (28 June 1948): “In the midst of the conflict with the Cominform … the Communist Party increasingly stressed the importance of a freely developed creative personality. […] the new teaching personnel had to be created by fighting for free ideological development under the conditions of socialist democracy, by expanding the battleground of thought and taking the initiative…” Kesić’s “defence” of the party stressed its democratic qualities in making one’s views known, and that the method of showdowns with those with different views by “lynching” – which is vividly represented in the film – could not be imputed to the Party.

Among other things, Kesić stressed that the Presidency of SUBNOR approved of his assessment “because of the personality of the screenplay writer [referring to Ivan Aralica], who is already politically known to SUBNOR, but now rests in the gentle shadow of literary sunshine.” Thereby he again pointed out the importance of political suitability for literary producers in a socialist society, in which there was no room for its abnegators and in which art and politics operated hand-in-hand in the advanced socialist phase as well. 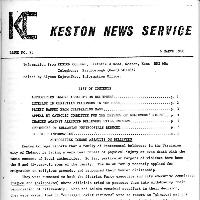 The ninety-third issue of the Keston News Service (KNS) is one example of the kind of information disseminated by the Keston Institute. This particular document details incidents of a Pentecostal Ukrainian family being accosted by local Soviet authorities for applying for emigration and renouncing their Soviet citizenship. The youngest son appeared to have been physically assaulted by two unnamed men, but the family was denied legal recourse on the grounds of their repudiation of the Soviet Union. Although Keston’s reporting on religious life in the Soviet Union was not always explicitly critical, the publication of reports on the conditions of religious life to a Western audience undoubtedly contributed to the public’s perception of the Soviet Union as anti-religious and lacking in human rights. The dissemination of such information via KNS coincided with various human rights campaigns initiated by non-state actors in the West and the Soviet Union, such as the Helsinki Groups. Keston Institute was part of a larger constellation of individual and organizational actors who transnationally supported political and religious dissent in the Soviet Union.

The book Kettős elnyomásban [Dual oppression] presents a complex of texts from the Hungarian minority’s legal protection commitee. They follow the committee’s activities from 1978 until the end of the Communist regime in 1989. In the book we can find texts in which Duray writes about his time in jail. The book has five chapters, most of which deal with the problems of the educational system. It was first published in New York in 1989, then again in 1993 in Bratislava. The book is a document of great importance in that it shows how the committee worked. 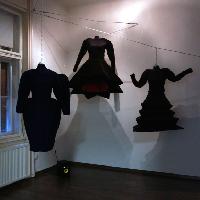 Király, Tamás, Dresses for the Dressater: Dressed to Thrill, 1988.

In 1988, Berlin became the cultural capital of Europe. For the occasion, the German fashion designer Claudia Skoda was asked to create a fashion show by inviting artist from different corners of Europe. Skoda invited Király, who was the only representative of the Eastern Bloc. His collection was strongly inspired by Oskar Schlemmer’s costumes at the Triadic ballet in that he created his dresses using only circles, triangles, and squares from the perspective of design and only red and black colours separately from the perspective of colour.
In the end, he created 40 dresses, of which three have survived as part of his bequest.