In August 1990, there was a Rolling Stones concert at Strahov Stadium in Prague. More than 100,000 people were in attendance and the band were introduced by President Václav Havel: “From the starry sky, the Rolling Stones descended to our republic.” Before the concert, there was an informal audience of the group with President Havel at Prague Castle. The concert became one of the iconic events following the Velvet Revolution in 1989 and was then seen by a considerable part of the public as a symbolic, definitive confirmation of the change of political and social situation. Karel Haloun, an important Czech artist connected to the music scene who produced posters and LP covers for Czechoslovak music bands in the 1980s and 1990s, was a non-playing member of the music bands Jasná páka and Hudba Praha (very popular bands of the Prague club scene in the 1980s), created a poster for this concert. The poster in a typical “Haloun” style was not, however, from business-legal reasons used to promote concert in the end. It is now a rare item in the collection of the Popmuseum in Prague. The poster was presented to the public in 2011 in the exhibition “Přišli včas (i s křížkem po funuse)” (They came in time, they even locked the barn door after the horse bolted) about concerts of famous foreign bands in Czechoslovakia and the Czech Republic between 1990 and 1995.

The most important thing that Olga Karlíková brought to Czech fine art is her records of birds singing and flying, as well as the sounds of frogs, whales and other creatures. Her work began appearing in the 1960s, when Karlíková was leaving Prague more and more frequently to visit the countryside near Melnik, where she recorded birds singing. She quickly created her own graphic language, which resembled a seismic chart. The recordings developed into drawings when she went walking early in the morning to record the songs. She had a roll of paper, on which she recorded the singing for a several hours at the time, when it was the most intense, and attempted to find pictures. With delicate sketches, each time she noticed different contours of the musical spring and summer landscapes, where the air was filled with the sounds of larks, finches, warblers, ousels, willow tits, swallows, crows, and swifts, called their expert name "swallowers." The vocal cycles of bird recordings are predominant in positivist methodology. The author has devoted herself to work in fields ranging from ornithology, ethology, art convergence, and science, to philosophy. Bird songs are iconic for her.

Olga Karlíková is considered to be the founder of conceptual tendencies in Czech art. 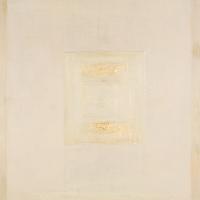 Kazimiera Zimblytė was one of the first creators of abstract paintings in Lithuania. She broke with the tradition of painting based on the figure and narrative. In her work, Zimblytė looked at the understanding, perception and feeling of what is outside material and actual things, beyond material existence. In this specific painting (1978), the artist created the feeling that the object has stopped and is hanging on.

Malevich wrote this article while teaching at the Kyiv Art Institute. This article provides an overview of the faculty of formal-technical disciplines at the institute.