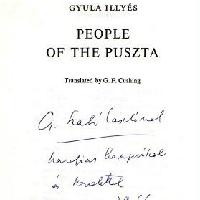 Illyés, Gyula. People of the Puszta, 1967. Book
László Cs. Szabó had many friends among Hungarian writers and poets before and after his emigration (1949). He had great appreciation of Gyula Illyés, one of the most important writers of Hungarian literature of the twentieth century. In 1967, Illyés dedicated his famous book’s English translation, the People of the Puszta, to Cs. Szabó (the book was published in Hungarian in 1936). This book is one of the most important works of Illyés, an exact sociography and also an autobiography. In this work, Illyés memorialized the peasants of the Mezőföld region, which was his social layer. In the sociography, he could simultaneously present the misery and humanity of the poor.
read more 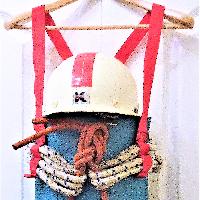 Normally a climbing harness is made from materials tested according to international (UIAA) standards, light, and very comfortable. However these could not be found in the last decade of communism in Romania. The solution achieved by improvisation by Dragoș Petrescu has the following characteristics: “The climbing harness was a very important part. Precisely because you could never be sure of the object you had improvised, you made a combination of chest harness and seat. Out of worn rope, usually six lengths placed parallel and sewn together with synthetic surgical thread, you made a sort of waistcoat with braces made of tape for blinds, which you wore around your chest and with which you tied yourself into the rope. Initially, mountaineers climbed with only the chest harness, only that they realised that once you were hanging on the rope, the chest harness became very tight; the circulation stopped and that could be fatal. Then they came up with the idea that it was good to have a seat as well as the chest harness. The so-called seat was usually made from strapping for car seatbelts sewn with surgical thread, which looked like a belt with two loops for the feet, into which you fastened yourself together with the chest harness. For the seat, you got hold of various materials. Principally seatbelt strapping. Ideally, we used the seatbelts for Dacia cars, but these were quite expensive. Many ‘got hold of’ one of these straps from the people that worked in the factory in Braşov where they were produced and where the unfinished product was sold illegally by the metre. As a rule, we made ourselves both seat and chest harness.” The original complete harness, composed of chest harness and seat, exists in Dragoş Petrescu’s private collection of improvised gear, but it can no longer be used for climbing as the materials from which it is made have deteriorated. 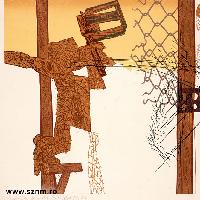 Bar Breaker is one of Baász’s most iconic works, compressing his virtuoso graphic world and his oppositional attitude into one piece of art. Although now famous for his workshops and performances, Imre Baász was primarily a graphic artist. His aim of destroying familiar forms in art is paired with a constant search for new forms. He only kicks the rules if he has news to offer. Bar Breaker dates back to the period right after he moved to Sfântu Gheorghe from Cluj-Napoca. The county first offered him a house in Arcuș/Árkos, a nearby village. This was the period when he discovered objects which later become key elements in his work, like the clapper, the nelson, and the loudspeaker.

Bar Breaker features a standing figure with a clapper in his hands disrupting a grid. On the other side of the grid, there is another figure sitting on a crowned chair, holding a loudspeaker. The abstract style and the geometrical figure perception are very typical of the Baász’s early period.
read more 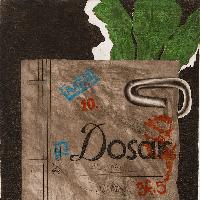 Baász almost never chose the actual political situation or oppression specifically as a theme. Even the work entitled File, which depicts the typical layout of the surveillance dossiers made by the Securitate (Departamentul Securității Statului, the secret police of Romania, between 1948 and 1989) to find and target dissidents. The dossier is old, stained, and dirty and the pages are pinned together with a safety pin, which is also one of the key signs of the artist, dominating The Wounds of the Earth series. 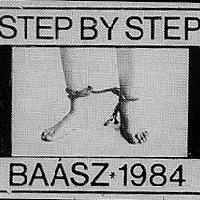 Step by Step is a mail artwork from the beginning of the 1980s which Baász made for a Hungarian exhibition. The stamp depicts a pair of legs tied together, which obviously carried ambiguous meanings at the time. Baász made it for the International Mail Art Exhibition curated by Antal Vásárhelyi and organized by the Young Artists’ Association in Budapest in 1984. The work was highly celebrated and published the same year in Élet és Irodalom [Life and Literature], a Hungarian weekly, as an illustration for János Bencze’s article Szabadlábon [At Large]. The artwork provoked a conviction from the Romanian embassy in Budapest and ultimately served as a pretense for the interrogations to which Baász was subjected by the Romanian political police between October 3 and 8, 1984. It was during this interrogation-series that Baász formulated his ars poetica.

The real importance of the selected work is actually of another nature. The genre merits emphasis, as it is is the key to the whole piece. In the 1980s, when communication was entirely supervised, mail art served as a perfect transmission tool among artists. The aim of creating a web of radical artists throughout Europe was a purely aesthetic and apolitical goal.
read more
6 - 10
«« previous page 1 2 3 4 5 6 7 8 9 10 ... 10 11 next page »»