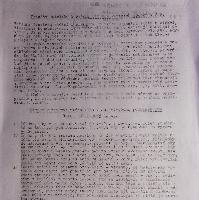 The typewriten manuscript of a petition calling for religious freedom, an predecessor of the so-called "Moravian Challenges"

The two-page typed petition Petice Podněty katolíků k řešení situace věřících občanů v ČSR was written by Augustin Navrátil in 1985, preceding the most famous petition from 1988 called the "Moravian Challenge" signed by over half a million people. The petition is in Jan Tesař’s collection, and is the second petition of Augustin Navrátil, with 20 signatures on religious freedom. It includes the requirements of a free study in theology, an autonomous church administration, a separation of the Church from the state, an end to the discrimination of believers, etc. The petition was distributed in Czechoslovakia and also in exile. Jan Tesař and Navrátil were in contact, so the petition has been saved in his collection. It is an important material illustrating the forms of discrimination against believers and churches, as well as a historical documentary on the breakthrough of the "Moravian challenge". 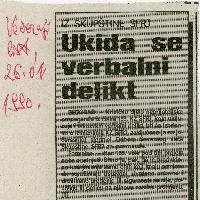 read more
The verdict of the Supreme Court of Serbia against Mihajlo Mihajlov, 1967. Archival document

In the verdict of the Serbian Supreme Court in Belgrade on April 19, 1967 on the Mihajlov case and his initiative to establish an independent cultural magazine called Slobodni glas, the Court sentenced him to three and a half years in prison, to be served in Srijemska Mitrovica. After the first-instance verdict of the Belgrade court, Mihajlov and his attorneys Kovačević and Glowatzky appealed without success. Despite this complaint, he was sentenced under Article 118 of the Criminal Code for engaging in hostile propaganda. They had attempted to defend him by asserting that the proposal to establish a Christian-socialist party and democratic socialism was a form of benign academic debate which was not anti-constitutional act in any way.

The Serbian Supreme Court in Belgrade regarded the defence’s reasoning as unfounded, accusing Mihajlov of the hostile action “against the social and political organization” of the Socialist Federal Republic of Yugoslavia. In addition to these initiatives, the Supreme Court charged him for frequent communications with “émigré and reactionary organizations” abroad and for his correspondence with the press of Western capitalist countries (Mihajlo Mihajlov Papers, box 3).

Mykhailyna Khomivna Kotsiubynska and Zina Genyk-Berezovska became acquainted in Kyiv during a visit by the latter to the Ukrainian capital in 1964. They became fast friends, Kotsiubynska’s letters accounting for more than a third of the letters sent to Genyk-Berezovska. The letters are now held and the T.H. Shevchenko Institute of Literature in Kyiv, Ukraine. The entire correspondence is the byproduct of a close female friendship, one that was deep and forged during a difficult time.

The three letters sent in 1965 show that these two were under surveillance, as their letters were often lost, or more likely confiscated in transit. Kotsiubynska's letter from July 30, 1965 asks why there has not been any word from Genyk-Berezovska. Kostiubynska was particularly aggrieved because she had sent an important letter in which she wrote among other things about the death of a close relative and Kotsiubynska's adoption of her four-year-old daughter. Genyk-Berezovska wrote back sometime later, prompting Kotsiubynska to write a letter on August 21, 1965, underscoring how important this correspondence was to her and asking Genyk-Berezovska to write more frequently. The letter from September 30, 1965, opens with "Zinochka, my dear bumble bee!" Kotsiubynska asks why she has not heard from Genyk-Berezovska and wonders whether she is ok. Kotsiubynska writes that she misses Genyk-Berezovska greatly, especially given what is happening in Ukraine at this time. In Aesopian language, Kotsiubynska explains that things are not going well and that one of their friends has been arrested. "Things are not fun for us right now. Our friend, who has not written you for so long, will not be able to write you again for some time. And it is not his fault." She also asks whether Genyk-Berezovska received an earlier letter, presumably in order to ascertain whether it might have been intercepted by the state security services.

When one reads back letters sent between these two women--especially those written in the late 1960s and early 1970s--one can feel the stresses of not being able to communicate regularly and with any certainty. This weighs heavily on Kotsiubynska, who is also under pressure and surveillance from the authorities. In May 1966, she asks Genyk-Berezovska if she has received a letter from Ivan, referring to Svitlychny, who had been released on April 30, 1966 for being "socially harmless." Apparently, his stature and popularity had been so great and the protests against his arrests so numerous, that the authorities opted to release him. The following year, Kotsiubynska wrote two letters that were only ten days apart--July 5 and july 15. In the first, she tells Genyk-Berezovska that she has been fired from her job and expelled from the Communist party. In the second, she says simply "this year has worn me down completely." Through their correspondence, one senses the immense psychological pressure facing literary scholars and human rights activists in Ukraine at this time, though one would also have to read Genyk Berezovska's responses in order to have the complete picture.

This manuscript was written in the 1950s, after the rift between Tito and Stalin (1948) and attempts to introduce the experiment of self-management as a separate direction under the Yugoslav version of socialism, and to apply a different interpretation of Marxism-Leninism than that of the Soviet Union. Tijan defined the separate path of the Yugoslav communists with the following words: “Titoism, in fact, means an attempt to overcome their doctrine and the practical needs of the state, a process in which the Communist Party consistently plays the role of a brake, as acknowledging logical and realistic conclusions would inevitably led to the loss of its power. Therefore, this new period of Yugoslav communism is not a communist heresy at all, but a peculiar application of Marxism-Leninism, altered even with elements of Stalinism, to the special circumstances in which Yugoslavia has found itself (...). In Yugoslav communist reformism, however, the most important fact is that it did not come about voluntarily or as a planned and deliberate policy of the CPC leadership, but as a result of the objective and external influences that forced the leadership to start the process called Titoism.”