Exhibition: Black Whitsunday - The Deportations to the Bărăgan 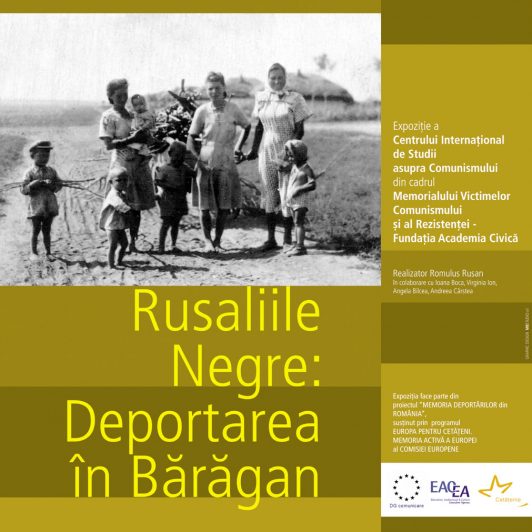 The exhibition “Black Whitsunday: The Deportations to the Bărăgan” was first opened at the Dimitrie Gusti National Village Museum, which hosted it in the period 25 March to 25 April 2011. The exhibition then travelled to Timișoara, Drobeta Turnu Severin, Sighet, Sibiu, Berlin, Sindelfingen, Munich, Augsburg, Tübingen, Budapest, and Cluj, before returning to Bucharest, to the Sighet Memorial’s Pemanent Exhibition Space in the Romanian capital. The exhibition’s twenty-eight panels presented themes relating to the forced removal from the Banat of all those who were suspected for various reasons of being adepts of Iosip Broz Tito. The panels relect the following themes: the international context of the Stalin–Tito split, the elaboration of the so-called “dislocation” plan, the compilation of “black lists,” the deportations to the Bărăgan, aspects of daily life in the new settlements – building houses, obtaining water and food, school, work in the fields, funerals – and the use of the area as a place to send released political prisoners into so-called “forced domicile.” The explanatory texts, complemented by hundreds of photographs, maps, and objects, are based on the personal testimonies of those directly involved, recorded and archived by the Civic Academy Foundation. The opening of the exhibition was also the occasion for the launch of an audio-book containing extracts from the recollections preserved in the Oral History Archive of the International Centre for Studies into Communism. The exhibition was part of the project “The Memory of the Romanian Deportations,” financed by the European Commission through the programme “Europe for Citizens: Active Memory of Europe.”