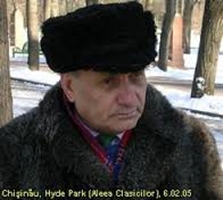 Gheorghe David (b. 1943, Pepeni village, Sângerei district, Moldova; d. 2007, Chișinău) was an intellectual and an engineer by training, who became famous for openly criticising the Soviet regime and was subjected to forced confinement and psychiatric abuse as a reprisal for his oppositional stance. His case became emblematic for the use of punitive psychiatry by the Soviet penal system. In 1970, he graduated from the Moldavian Polytechnic Institute in Chișinău. From 1970 to 1979, David worked as an engineer for various organisations and was highly regarded in his field. In the 1970s and early 1980s, Gheorghe David openly expressed his critical views on the nature of the Communist system. David’s criticism focused on the inefficiency of the Soviet economy, on the Soviet Unions’ hypocritical and aggressive foreign policy (with a particular emphasis on the invasion of Afghanistan), and on national discrimination in the Soviet periphery, notably in his native Moldavia. In the late 1970s and early 1980s, David wrote a number of critical letters to various high-ranking Soviet dignitaries, e.g., Brezhnev, Chernenko, and Gorbachev. As a result of his acts of defiance, in 1986 Gheorghe David was demoted from his job, becoming an ordinary worker. He was eventually arrested on 1 August 1986 during a trip to Tiraspol. While being questioned by the Chişinău-based Prosecutor’s Office, he was warned that psychological pressure would be used against him if he refused to cooperate. David had already been in custody for several months when he was transferred to the criminal psychiatric section of the Chişinău prison, where he was subjected to the “treatment” promised by the authorities. In December 1986, a special psychiatric commission diagnosed Gheorghe David as being “mentally alienated.” Consequently, he was sent to a psychiatric hospital in Dnepropetrovsk, Ukraine, a place that was regularly used for detaining political prisoners in the Soviet Union. David was officially found to be “mentally disturbed” by a special medical commission because of his “dangerous” political opinions. In particular, he asserted that the Soviet Union had violated the sovereignty and independence of Czechoslovakia in 1968 and that of Afghanistan in 1979. He also claimed the identity of the “Moldavian” and Romanian languages. David was released only in the summer of 1988, as a result of reports published by the Soviet press, which was becoming increasingly free, and thanks to protests staged by foreign human rights organisations, among them Amnesty International, as well as broadcasts of Radio Free Europe/Radio Liberty. After his release, he taught at the Technical University of Moldova and was responsible for two technical inventions. David died in 2007, just a few months before the European Court of Human Rights recognised that he was a political victim of Communist repression and that psychiatry had been used illegally against a healthy person.

Cașu, Igor. 2013. “Gheorghe David: A Victim of Punitive Medicine.” In Lest We Forget: Memory of Totalitarianism in Europe. A Reader for Older Secondary School Students Anywhere in Europe, edited by Gillian Purves, 250-254. Prague: Institute for the Study of Totalitarian Regimes.