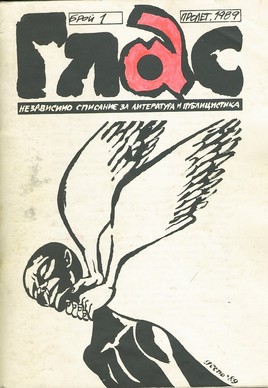 Samizdat magazines appeared in Bulgaria only at the end of the 1980s. Two important Bulgarian samizdat magazines were conceived together, their first issues were published at the same time: "Glas. Nezavisimo spisanie za literatura i publitsistika [Voice. Independent Magazine for Literature and Journalism]" with founder and editor-in-chief Vladimir Levchev and "Most. Almanah za eksperimentalna poezia [Bridge: Almanac for Experimental Poetry]" with founder and chief editor Edvin Sugarev. Both magazines were printed on typewriter and reproduced on xerox at no more than 100-200 copies. The first issue of "Glas [Voice]" was reproduced on documentary photo paper. The artist was Stefan Despodov, who created the covers by hand. The magazine was produced in the bathroom of Vladimir Levchev, which was turned into a photo laboratory.

Vladimir Levchev says: "In the autumn of 1988, the Club for Publicity and Democracy, then known as the Klub za glasnost i preustroystvo [Club for Glasnost and Reconstruction] was organized. At the end of December, enthusiastic about the new developments, Edvin and I spontaneously decided to start a Samizdat magazine. We acted very expeditious. Since then there were two accessible xerox machines in Sofia and they were under surveillance, and there were no computers at all, the 'samizdat' was, of course, a technically difficult task. On Edvin's idea, we bought two-sided photo paper, and using my bathroom for a lab, after a week's work, we produced around 100 counts of two independent magazines, Edvin's 'Most' and 'Bridge'. We photographed each page printed on a typewriter - it was like a hand paved street ... First we thought of making two issues of one magazine so that if we were arrested after the first issue, we would do a second one. But then we switched to two different magazines. After we prepared the issues, we distributed them to friends, famous 'dissidents', people with access to a copy machine at their office, who could made more copies. ... The first issues of the two magazines came out in January 1989.

In January 1989, with Blaga Dimitrova, I signed the letter in support of Petar Manolov and became a member of the Club [for publicity and democracy] and then of 'Ekoglasnost'. A little later, Deutsche Welle, the BBC and Radio Free Europe reported about the magazine, and in the autumn, during the Eko-Forum, Rumyana Uzunova also took an interview with me. I was released  from the magazine I worked at at that time, “Narodna Kultura” ['People's Culture'] and fined 500 leva for issuing an unregistered magazine. They called me to the Bulgarian Book and Print Association [i.e. the censorship authority] and I was threatened that if I publish another issue, I will be fined 1,500 levs, and State Security will deal with my case and I will probably go to jail. I did, however, issue another issue - this was during a 'Ekoglasity' subscription […], an eco-forum. No one could even suspect that even on November 10, 1989 Zhivkov would resign. Until 10th of November 1989, I published four issues." (quoted after interview of V. Levchev, Rudnikova 2006)

In the first issue of the magazine "Glas [Voice]" the founder Vladimir Levchev - after the introduction ending with the words "It [Bulgaria] yearns for a little publicity, for democracy!" - statet the main objectives of the magazine as “to publish mainly literature, poetry, criticism and essays, which hardly can find a place on the pages of the official jurnals”, as well as of critical texts on ecological, economic and social problems, written by Bulgarian and foreign authors.

After the fall of the communist regime, "Glas" and "Most" were legalized. Many independent journals appeared, even printing became expensive. The magazine "Glas" remained a literary magazine, the publishing of several issues was sponsored by the Open Society Foundation of George Soros. In 1994, Editor-in-Chief Vladimir Levchev left for the United States. For several years he kept the magazine on the Internet, and in Sofia Rumen Leonidov and Vladimir Trendafilov published several more issues. The last issue of the magazine "Glas" was num. 14/1994.

Today, "Glas" and "Most" magazines  are bibliographic rarities. Thanks to the "Free Poetry Society", created in 1990 by Blaga Dimitrova, Vladimir Levchev, Edvin Sugarev and other writers, and re-organized in 2016, all issues of the two magazines are uploaded with free access to the website of their society, www.freepoetrysociety.com.